For one Maryland dad it really is his way or the highway.

When 12-year-old Kenny Burks broke his curfew his father decided grounding him wouldn’t be an affective punishment so opted for the public humiliation route instead.

Hoping to teach him a lesson about respect, Kevin Burks made his son spend Monday parading up and down the street carrying a sign that read: ‘Homeless Won’t Listen to Parents.’ 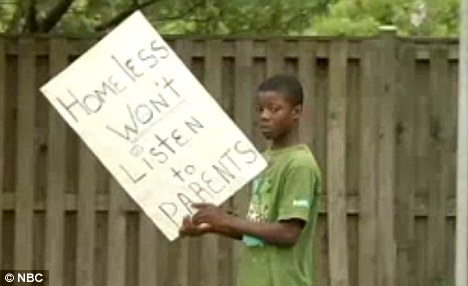 Humiliation: Kevin Burks made his 12-year-old son Kenny carry this sign up and down a street all day Monday after the boy broke his curfew over the weekend

While many parents might deem this punishment excessive, Burks argued to NBC4 that ‘all his son has to do is check in at 8.30.’

However, one night over the weekend Kenny didn’t arrive home till about 9pm. He had been hoping to stay at a friend’s house overnight.

Kenny’s friend called the Burks’ household to inform them that Kenny would be spending the night at his. Burks ordered his son home.

The strict father explained his parenting method saying that he pays for ‘everything’ his son has, including the roof over his head. 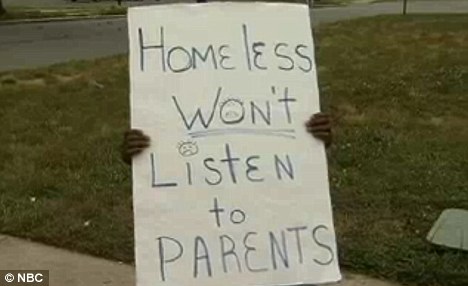 A bit harsh? Kenny, 12, carried the sign between 9.15 and 5pm Monday after turning up half an hour late for his curfew over the weekend 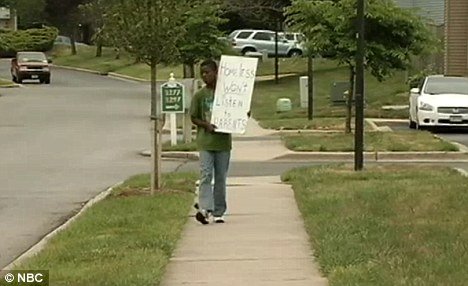 Controversial: One neighbour thought the punishment was too strict and called police to complain about the father’s treatment; police arrived on the scene but took no action

He also said that a more traditional punishment, such as confiscating video games for a week, would not do ‘any good.’

The father and son were out on the street from about 9.15am till 5pm, with breaks every two hours including stops for breakfast and lunch.

One neighbour reportedly disagreed with Burks’ punishment and called the police to complain.

Burks said that the responding police officer praised his punishment. In a video of the boy trudging up and down the street with the sign, his father is heard saying: ‘I want to see your face.’

Earlier this year one Denver dad forced his 12-year-old son to carry a ‘thief sign’ after the boy was caught stealing $100 from a family member.

When Joseph Gonzales discovered that his son, Jose, had stolen cash from his cousin he made him stand on a street corner for two days holding a bright yellow sign saying: ‘I am a thief. I took money from a family member.’

On College Forms, a Question of Race, or Races, Can Perplex