A woman soldier died after being stabbed 74 times in her own room at her barracks barracks, it has been revealed.

Brandy Fonteneaux, 28, was killed in her room at Fort Carson in Colorado after being stabbed to the head and neck four times along with another 70 wounds in her chest, arms, legs and back.

Her alleged murderer, Sergeant Vincinte Jackson, is a fellow soldier who is now claiming he was suffering from temporary insanity at the time of the brutal attack in January. 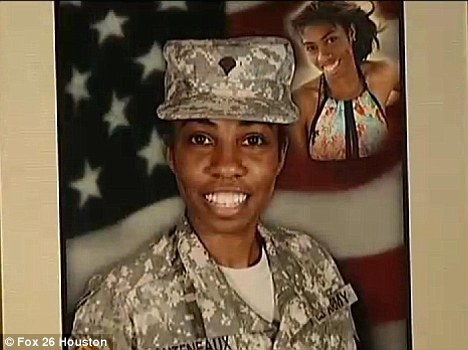 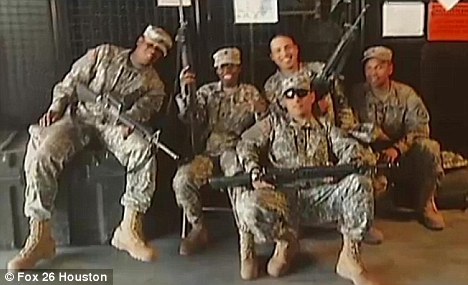 He is alleged to have gone into her room following a night out drinking when she woke up. He then launched his attack, stabbing and choking her to death.

Her grieving mother,. Verona Fonteneaux, went through the pain of reading the entire autopsy report and even watched a video of a pathologist examining Brandy’s body.

Jackson is reported to have confessed to the killing saying he went into the room following a ‘psychotic break’ after a night drinking.

Mrs Fonteneaux added: ‘It’s disgusting; it’s heartbreaking. I mean, it kept me in the bed for like four days. 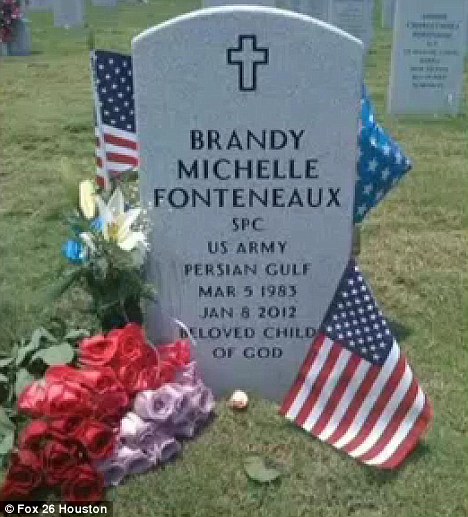 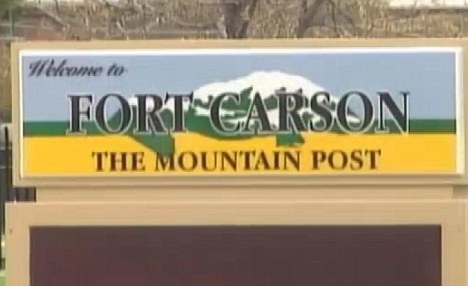 ‘He stood by her bed and he touched it and that’s what startled her and woke her up. And he just started stabbing her. She tried to break away, but — just too many wounds.’

Her mother added that for a person of her daughter’s size, that was a lot of injuries.

Since Brandy’s death on January 10 Mrs Fonteneaux has been unable to visit her daughter’s grave but her two sons had been and put flowers on her military grave.

The family has asked that Jackson gets life without parole but his lawyers have argued that he was not in his right mind at the time so should not be tried. 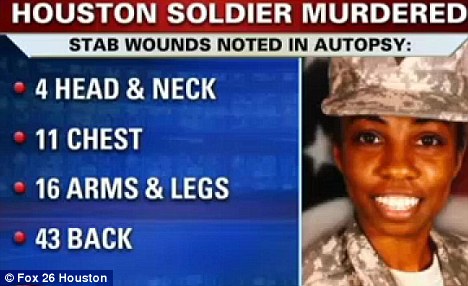 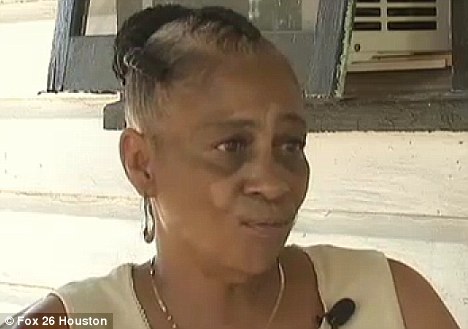 Verona Fonteneaux, Brandy’s mother, watched a video of the autopsy and read a full report into her daughter’s death

Brandy was raised by her aunt Beven Thomas. At the time  of her murder she said: ‘She was my life, she’s my love. And I’m going to miss her forever.

‘I don’t understand how we can go and protect every other country in the world, but we can’t protect our children as they sleep in the barracks?’

Brandy lived at the Colorado Springs base, but was originally from Houston. She graduated from Texas Southern University in 2009 and was a star on the track team.

She held the rank of specialist and had been in the Army two years. She was a food service specialist in the 4th Engineer Battalion.

Brandy was stationed at Fort Carson as a food service worker, she originally enlisted in hopes of seeing the world.

Mrs Fonteneaux said: ‘She didn’t deserve to go that way.

‘Now, if she’d been in Iraq or Afghanistan, I could’ve swallowed that with a golden nickel. Walked with my head up high.’