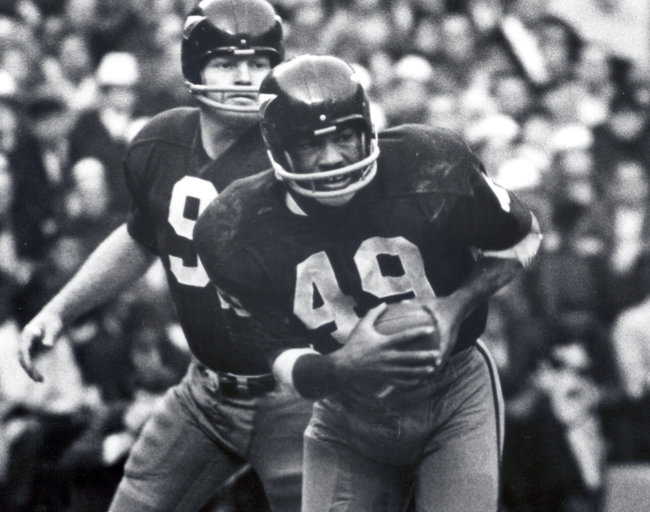 Bobby Mitchell during his time playing with the Redskins. Mitchell was one of three black players on Washington’s first integrated roster, in 1962.

On a mild autumn Sunday in Washington a half-century ago, Bobby Mitchell dominated the St. Louis Cardinals. Mitchell, a 27-year-old flanker for the Redskins, caught 7 passes for 147 yards and 2 touchdowns in a 24-14 victory. Trying to contain Mitchell, The Washington Post sports columnist Shirley Povich wrote, was “like trying to deal with a basketful of snakes.”

Those achievements, however, were mere footnotes. For that day, Sept. 30, 1962, marked Mitchell’s first home game for the Redskins. He was one of three black players on the roster — guard John Nisby and fullback Ron Hatcher were the others — all in their first season with Washington, the last professional football team to integrate.

The integration of the Redskins was 16 years in the making, brought on, at least in part, by the combined efforts of the N.F.L.’s commissioner and a member of President Kennedy’s cabinet. And it was a historic moment in the life of the nation’s capital, which had blossomed from a relatively small — and segregated — city populated primarily by federal employees to a large and diverse metropolis roiled by social upheaval.

“You’re performing for a group of people and you’re not sure if they want you, so I had a lot of mixed emotions that game,” Mitchell, now 77, said recently. “I still don’t believe I performed as well as I did, knowing how I felt all week long getting ready.”

The Redskins were owned by George Preston Marshall, who was born in segregated West Virginia to native Washingtonians. He attended segregated high schools in Washington. His family counted a Confederate flag among its heirlooms.

In 1932, Marshall bought the Boston Braves football team. After five years of sparse crowds, and a loss of $85,000, Marshall moved the team, now named the Redskins, to Washington.

The Redskins became the southernmost N.F.L. team east of the Mississippi River and the only one outside of the Northeast, the upper Midwest or the West Coast.

When the Redskins arrived, Washington was a smaller, mostly homogeneous city. Fewer than a million people lived in the area. Many were federal employees. White federal politicos ruled the city, particularly southern senators and congressmen. Congress segregated local public schools in 1862, and de facto segregation existed at most public facilities during the early 20th century.

Marshall viewed the Redskins as an entertainment vehicle he could market in the South and to Washington socialites. He staged elaborate halftime shows, created a marching band like those at Southern colleges and adopted a team song. When D.C. Stadium opened in 1961, he ordered that the seats be wide and feature backrests.

As for integrating his team, Marshall said that many fans preferred watching white players and would reject the Redskins if they had a black player.

In contrast to other N.F.L. owners, Marshall “did not pretend there were no blacks good enough to make his team,” Andy Piascik wrote in “Gridiron Gauntlet: The Story of the Men Who Integrated Pro Football in Their Own Words.” “Unlike the others, he was honest enough to admit that he simply didn’t want them around.”

Despite the owner’s attitude, the crowd at Redskins games featured at least a bit of diversity. Edwin B. Henderson, the black Washington public schools director of physical education, observed the crowd before a game in September 1940 and wrote a subsequent letter to The Washington Post.

“That 32,000 mass of Americans standing tense, erect and fervidly at attention at Griffith Stadium Sunday, when our national anthem was being played, was tremendously impressive and solemn,” Henderson wrote. “In this setting, we have democracy at its best. Crowded and packed together, Jew and gentile, black and white, thrilled and slumped with the fortunes of Marshall’s Indians.”

That was not how it was on the field.

Though pro football included 13 black players through the 1920s and early ’30s, the integration of the sport did not truly begin until 1946 when the Los Angeles Rams signed running back Kenny Washington and receiver Woody Strode, and the Cleveland Browns of the All-America Football Conference signed offensive tackle Bill Willis and running back Marion Motley. In 1949, 3 of the 10 N.F.L. teams had black players. By 1955, the Redskins were the lone holdout in the 12-team league.

At the same time, Washington was enduring a rocky transition to a booming, cosmopolitan, more heterogeneous city. Fueled by the New Deal and postwar expansion, the number of federal jobs in the area jumped to 230,000 in 1950, from 62,000 in 1930, and the population increased to 1.5 million from 600,000.

And the increasing number of black residents began taking federal jobs in building trades, manual labor and personal services industries. From 1938 to 1956, the percentage of black federal workers in Washington increased from 3 to 24.4.

Despite moves toward integration throughout the 1950s, Washington, like its football team, was far from racially harmonious. The Truman administration barred discrimination in federal hiring in 1950. The law took three years to fully enforce, but during that time, most private restaurants and theaters desegregated. In 1951, Catholic schools desegregated. Public schools began desegregating three years later.

White flight to the suburbs, as well as housing and business discrimination and continuing Congressional control of the District of Columbia, slowed integration. Enrollment in Washington public schools went from 49 percent white and 51 percent black in 1950 to a 20-80 split in 1960, and many elite private schools refused to desegregate.

It became obvious that desegregating the city was one thing, but integrating it would be another.

The Redskins remained popular throughout the 1950s, sometimes drawing more than 30,000 fans to a game, despite missing the playoffs every season. Marshall rebuffed calls to desegregate the team.

“We take most of our players out of Southern colleges and are trying to appeal to Southern people,” Marshall told The New York Times in 1961. “Those colleges don’t have any Negro players.”

In February 1957, the N.A.A.C.P. picketed outside a Philadelphia hotel where N.F.L. owners were honoring Marshall for his service to the league. Pickets called for Marshall to desegregate.

“We didn’t get to first base,” Eugene Davidson, the N.A.A.C.P.’s Washington president, told Sport magazine a few years later. As the December 1960 N.F.L. draft approached, Povich, the Washington Post columnist, wrote that Marshall’s racial prejudice was “a disservice to all his coaches,” and that most fans wanted the Redskins to integrate. Marshall said the criticism did not bother him, calling Povich’s columns “publicity.” Yet, privately, he grew frustrated.

Holding the second and third picks over all, Washington selected a white quarterback and a white offensive tackle.

“In modern pro football, Marshall is an anachronism, as out of date as the drop-kick,” Povich wrote in response. “The other club owners have passed him by. Marshall, with his dedication to white supremacy on the football field, is still hearing a cry that doesn’t exist.”

Into this environment stepped Stewart L. Udall, President Kennedy’s secretary of the interior. The Redskins were preparing to move into a new stadium being built on federally controlled land affiliated with the national parks system, and hence under Udall’s domain. Udall stipulated that the Redskins could use the stadium only if they followed federal laws. That meant not applying hiring discrimination.

“I didn’t know the government had the right to tell a showman how to cast the play,” Marshall responded.

Pete Rozelle had become the N.F.L.’s commissioner a year earlier, at 33. He avoided confronting Marshall then, even though he intervened to prevent segregated seating at a preseason game in Roanoke, Va., between the Pittsburgh Steelers and the Baltimore Colts.

When the league signed a lucrative national television contract in 1961, however, team owners urged Rozelle to meet with Marshall, which he did in August.

Afterward, Marshall said publicly that he was interested in selecting a top black player in the upcoming draft. Udall agreed to allow the Redskins to play in D.C. Stadium in 1961 — on the condition that they would indeed desegregate after the season.

Critics were skeptical that Marshall would keep his word. The Los Angeles chapters of the N.A.A.C.P. and CORE boycotted an August preseason game between the Redskins and the Rams, and fans picketed outside the Redskins’ season opener at San Francisco.

Two weeks later, on Oct. 1, the Redskins opened D.C. Stadium. Before the game about 100 people picketed outside the stadium, including N.A.A.C.P. and CORE members.

Some carried signs that read: “We carry the rifle. Why can’t we carry the ball?” or “People who can’t play together, can’t live together.”

The draft was Dec. 4, a day after Washington squandered a 17-7 halftime lead and lost to the Cardinals. Ernie Davis, the running back from Syracuse who had won the Heisman Trophy, was projected as the top prospect. He was also black, and it was thought in some quarters that Marshall would pass on him and instead select a white player like Roman Gabriel, Merlin Olsen or Lance Alworth.

The Redskins, though, did indeed draft Davis. Then, just over a week later, they traded his rights to Cleveland for a package that included Mitchell, who acknowledged he had initial misgivings about his new team.

The Redskins of 1962, including Mitchell, Nisby and Hatcher, started 1-0-1. Protesters again gathered outside the stadium again for the Redskins’ home opener the next week. This time it was the Ku Klux Klan, unhappy the team had integrated.

None of that seemed to affect Mitchell. Late in the first quarter, Washington faced a third down at the Cardinals’ 40. Quarterback Norm Snead faked a handoff and lofted a pass to a streaking Mitchell. He reached over his shoulder, caught the ball at the 5 and cruised over the goal line. In the second quarter, Mitchell beat double coverage and caught a 23-yard pass from Snead in the end zone.

“For about five, six games we were just about leading the league, and that was unheard-of for the Redskins,” Mitchell said. “We were playing over our heads.” The Redskins finished the season 5-7-2, their best record in five years. Mitchell led the N.F.L. in catches (72) and yards receiving (1,384) and was third in touchdown catches (11).

Mitchell’s first three years in Washington were trying, he said, especially for his wife and two children. Some stores and restaurants refused to serve them, he said, and there were sportswriters who told him that their editors had ordered them not to write feature stories about him or vote for him to be an All-Pro. The team began to add more black players, however, and also continued to improve. By the mid-1960s, the Redskins were one of the highest-scoring teams in the league.

“The whole tenor changed,” Mitchell said. “As we got more black guys on the team and we began to split out around communities, treatments began to change.” As for Marshall, he began retreating from the public eye before the 1962 season ended. He became ill and turned over control of the team. He died in 1969.

Nearly 20 years after Marshall’s death, Doug Williams became the first black quarterback to lead his team to a Super Bowl victory when the Redskins beat the Denver Broncos, 42-10. Washington was a much different city from the one it had been when the team first arrived. A few days after the Super Bowl triumph, fans lined downtown streets on a rainy midwinter day to watch Williams and his teammates parade by, cheering on a team that brought pride to the city.