The South African photojournalist Gideon Mendel spent more than a decade documenting H.I.V./AIDS in Africa. But despite his commitment and passion for the subject, he found he could not continue.

“The time has come to hand over the camera,” Mr. Mendel said. “Me photographing H.I.V. positive people is just not appropriate anymore.”

So Mr. Mendel, along with David Gere, a professor at the University of California, Los Angeles, created a participatory photography project that encourages people who are H.I.V. positive to tell their stories. Over the last four years, they have put cameras in the hands of 72 people living with H.I.V. in six cities across the globe. The project, called Through Positive Eyes and largely financed by the Herb Ritts Foundation and the Ford Foundation, operates in conjunction with the U.C.L.A. Art and Global Health Center, which Mr. Gere leads. It aims to dismantle stigma associated with H.I.V. using an unconventional form of photojournalism.

“There is a lot of work being done by outside eyes looking in, but this is about the eye looking back,” Mr. Mendel said. “The holy grail of documentary photography is access, and their access to their own lives is just so superior to any access we can get as photographers.” 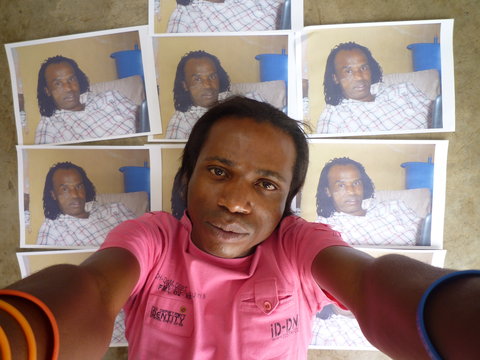 Bongi (Johannesburg)/Through Positive Eyes“We live a normal life as heterosexual couples do — we even hold each other’s hands when we walk in the street. We are just two guys who are in love with each other.” Bongi, Johannesburg.

The project consists of a series of 10-day workshops, co-led by London-based photographer Crispin Hughes, in different cities, where participants are guided through the photographic process, starting with how to operate a camera. They go on to create a personal body of work about living with H.I.V. Ultimately, their photographs are arranged with audio interviews, producing a collective video.

Although this participatory format is not new — PhotoVoice and the documentary “Born Into Brothels” come to mind — Mr. Mendel’s approach includes a rigorous educational component and group critiques to help develop the participants’ vision and form cohesive bodies of work.

What’s essential in the workshops is not the photography but the participants personal experience while producing and displaying their work.

“There’s a healing process for me personally, as far as stigma within myself,” said Mary Bowman, a 23-year-old Washington-based poet and activist who participated in the last workshop held there. “It’s for others who are going through the same thing, and for people who aren’t living with the virus to see what it’s like living with H.I.V.”

Jose (Los Angeles)/Through Positive Eyes“Self-stigma made me go into a hole. I knew people with AIDS were wonderful people, but I still felt really bad and shameful.” Jose, Los Angeles.

Ms. Bowman was nervous about the film showing at the conference. She said it is never easy to expose her H.I.V. status to a new group of people. Sometimes she wishes she could crawl back in the H.I.V.-status closet, and ignore the responsibility that comes with sharing something so personal.

But Ms. Bowman said she saw the whole process as necessary, both for herself and her audience.

She said she never imagined herself being an outspoken H.I.V. advocate, but after disclosing her H.I.V. status in a poem that she read publicly, there was no turning back.

Ms. Bowman still thinks about the days before she had to constantly talk about — and represent — H.I.V. But she said it’s worth the emotional support and gratitude she gets in return through exhibits like these.

On Saturday, Ms. Bowman’s project, with the 12 other participants from Washington, was shown as part of the opening of the International AIDS Conference, which closes Friday.

The images in “Through Positive Eyes” do not necessarily depict sickness, but more often, show ordinary moments in the participants’ lives.

When Jerry Kyle, a former competitive swimmer and participant in the Washington workshop saw his self-portrait in a Speedo with his swimming medals (Slide 3) come up on the screen during a critique, he quickly dismissed it. “It was a practice shot,” he said. But the group quickly convinced him that the image showed a vulnerable side of him that merited being included in his final edit.

Mr. Kyle, a Department of Education employee and former Air Force officer, sent the video made during the last workshop to his co-workers, and the response surprised him. “People came out saying, ‘I’ve never told anybody I’m positive,’” he said.

So when he asked his co-workers to take a portrait with him, the resulting image is a display of solidarity in which Mr. Kyle (below) sits in the center, and his co-workers each place a hand on him.

Mr. Gere said the project has become a living organism of sorts. Participants continue their photography in side projects.

Mr. Mendel has helped Mr. Kyle and others living with H.I.V. represent themselves, and because of the workshops, change their lives. “I think I have done everything I can about AIDS personally,” Mr. Mendel told Mr. Kyle at the Washington workshop. 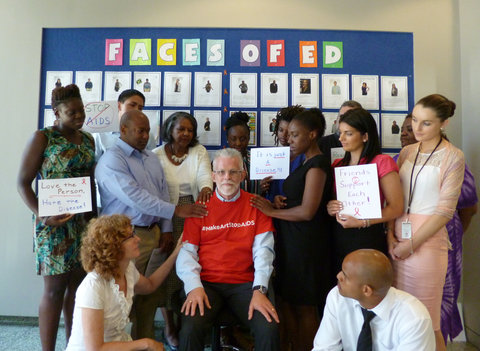 Courtesy of Jerry Kyle“I have a job in arts education for underprivileged children. I love what I do. I asked my office if they would pose for a picture, and man, they jumped on it! I have one photo where I’m sitting in a chair, and they are laying their hands on me. I can see in their faces; it wasn’t just a staged photo. I can see the compassion in their faces.”

All red meat is bad for you, new study says