Dr Robert Sansom at The University of Manchester identified the paired fins of Euphanerops, a fossil jawless fish that swam in the seas around 370 million years ago.
They say the unusual positioning of the fins show an important evolutionary shift.

Euphanerops, a fossil jawless fish that swam in the seas around 370 million years ago.

The Euphanerops fish were 3.9 inches (10 centimeters) long and looked somewhat like modern-day eels.

The specimens in the latest study were unearthed in a fossil bed in Miguasha, Quebec, decades ago, and were stored in collections in the Natural History Museum in London and the Museum d’Histoire Naturelle, Miguasha, in Quebec.

‘The age of Euphanerops is important as it dates from the time of a deep evolutionary split between jawed and jawless fish, the two main divisions of vertebrates alive today. ‘
As such, it represents an important stage in the evolution of paired appendages.’
Dr Sansom came across the paired fins as part of a study of Euphanerops fossils in Quebec, Canada.

3D surface scans of fossils and comparison of specimens preserved in different conditions revealed that there were two fan-shaped fins, a left and a right.

‘It’s not clear why the fins are positioned so far back on the fish, or what advantage they might have provided.

‘However, they do show that our early vertebrate ancestors tried out lots of different body plans before settling on two arms and two legs. 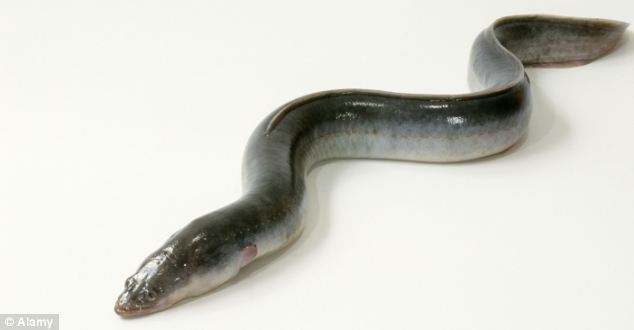 Euphanerops, a fossil jawless fish that swam in the seas around 370 million years ago, is related to the eel

‘If they hadn’t then our bodies would have looked very different!’

Dr Sansom’s research on the paired fins followed on from a 2009 study of early vertebrate evolution and fossil preservation with colleagues from The University of Leicester.

Their findings have been published in the Royal Society’s journal Biology Letters.

‘The discovery of new anatomical conditions will hopefully shed more light on the timing and sequence of the events underlying the origin and diversification of vertebrate appendages.’
Read more: http://www.dailymail.co.uk/sciencetech/article-2307350/The-fin-led-foot-Researchers-fossils-showing-fish-evolving.html#ixzz2QB90jnLB

Poker player wins fortune but casino refuses to pay him