What is believed to be the world’s first ever photograph is set to go on display in Germany.

The snap called View From The Window At Le Gras dates back to 1826.

It was created by photographic pioneer Nicéphore Niépce at his Le Gras country estate in Saint-Loup-de-Varennes, France. 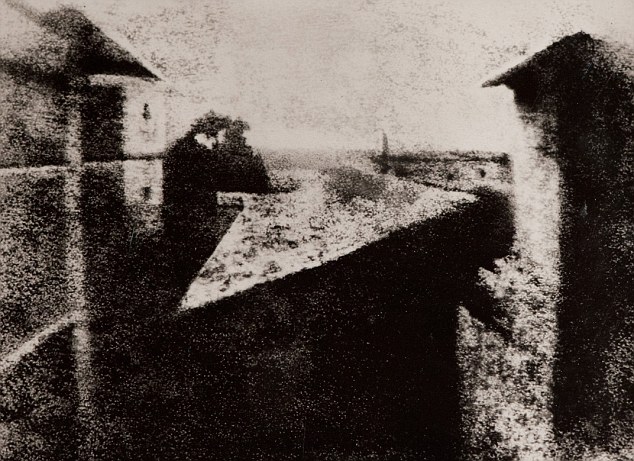 View From The Window At Le Gras: This reproduction shows what is believed to be the world’s first ever photograph, created by French inventor Nicéphore Niépce

Niépce is believed to have created the photo using a camera obscura focused on an eight by ten inch pewter plate coated with bitumen of Judea, a mixture similar to asphalt.

When exposed to light the bitumen mixture hardened, while the unexposed portions remained water soluble and could be washed away with a mixture of white petroleum and oil of lavender.

As a result of the eight-hour exposure, sunlight illuminates the buildings on both sides of the image, giving the picture its rather peculiar look.

Despite his achievement, Niépce was unable to interest Britain’s Royal Society in the process he called Heliography – meaning ‘sun writing’ – and ended up giving the photo to British botanist Francis Bauer.

It was last exhibited in London in 1898 then subsequently forgotten for more than five decades, until historian Helmut Gernsheim tracked it down and established Niépce as the inventor of photography.

In 1963 Harry Ransom, a U.S. academic, purchased Gernsheim’s photography collection for the University of Texas at Austin, where it has been on display in the Harry Ransom Humanities Research Centre.

Scientists there discovered that bitumen of Judea was the light sensitive coating used for the image. 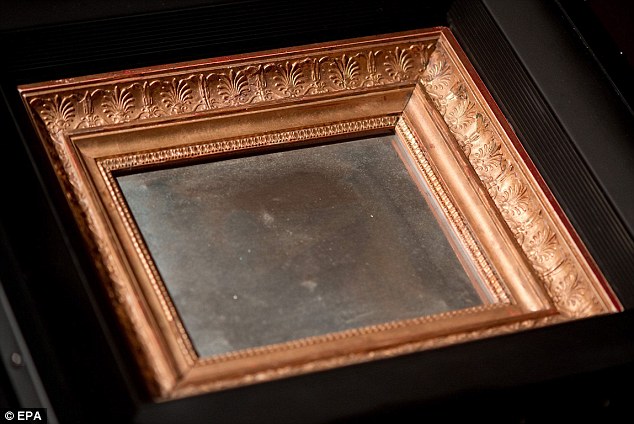 The real thing: Niépce made the image by coating a pewter sheet in bitumen then leaving it inside a camera obscura for eight hours

Niépce is thought to have dissolved the bitumen in lavender oil, a solvent often used in varnishes, and coated the sheet of pewter with the light capturing solution.

He placed the sheet inside the camera obscura to capture the image, removing it eight hours later and washing it off with lavender oil to remove the unexposed bitumen.

Among Niépce’s other inventions was the Pyréolophore, the world’s first ‘internal combustion engine’, which he conceived, created, and developed with his older brother Claude.

The photo will be part of the exhibition ‘The Birth of Photography’ which will open on September 9 at the Reiss Engelhorn Museums in Mannheim, Germany.