With Less Time for Voting, Black Churches Redouble Their Efforts 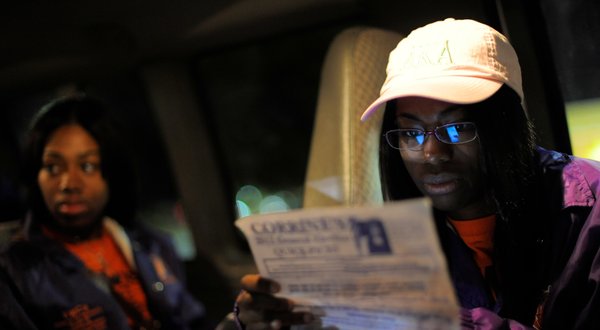 Whitney Paul, who was a first-time voter, looked over a handout with suggestions as she waited with college friends for early voting to start in Jacksonville, Fla., on Saturday.

JACKSONVILLE, Fla. — The Rev. Eugene W. Diamond of the Abyssinia Missionary Baptist Church here rarely pays attention to the clock when the spirit moves him to preach, but midsermon on Sunday, he said something unusual to his flock of hundreds: “Timing is critical, so let me hustle.”

He had already scaled back the minutes devoted to worship. Congregants had been instructed to forget wearing their Sunday best in favor of comfortable shoes because they all had work to do: moving thousands of “souls to the polls.” And they had only one Sunday to do it.

Across Florida, black churches have responded with ferocity to changes that Gov. Rick Scott, a Republican, and the Legislature made to eliminate six days of early voting this year — including the Sunday before Election Day, which had been the traditional day to mobilize black congregations. In 2008, black voters cast early ballots at twice the rate of white voters, and turned out in significant strength on the Sunday before Election Day to help propel Mr. Obama to victory here. 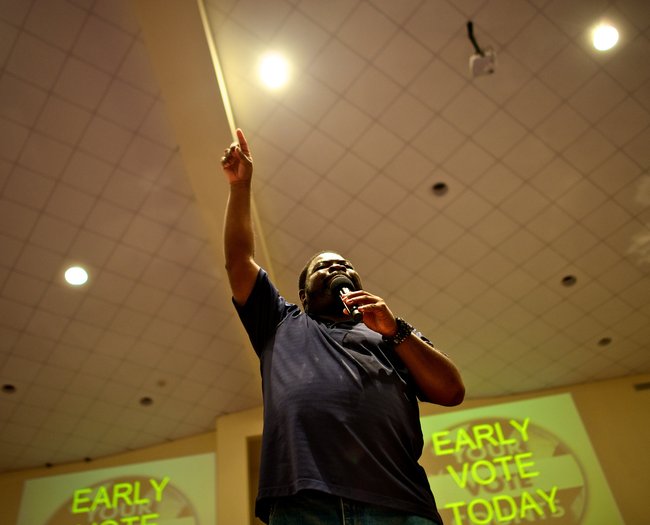 The Rev. Eugene W. Diamond preaching to his congregation on Sunday.

Now, with Florida’s 29 electoral votes up for grabs in a close race, Obama supporters are counting on a newly energized black base to put them over the edge despite the tighter window for early voting. A victory here for the president would defy recent polling and make his path back to the White House much easier.

In the newly revised schedule, early voting began on Saturday and continues through next Saturday. The churches, then, have one Sunday instead of two to move their members to vote.

In Jacksonville alone, black churches enlisted 40 buses and vans to move people who did not have transportation to voting sites. They also ran car pools, offered breakfasts and lunch, and helped organize rallies with music and celebrity appearances. 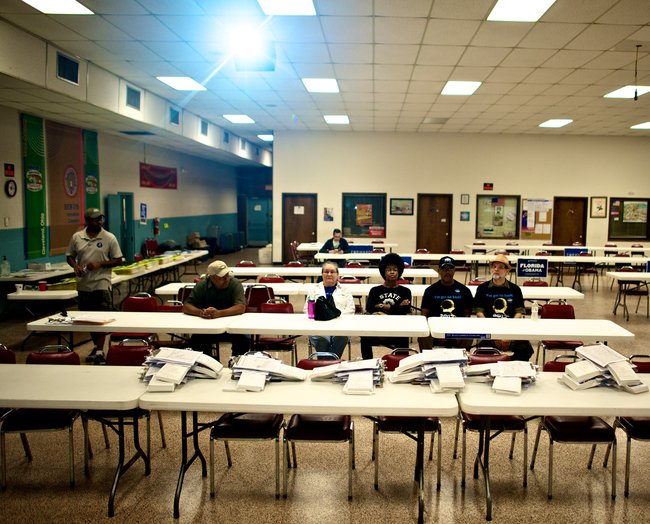 In precincts in black areas like the Highlands section in the north quadrant, lines snaked out of doors and into parking lots and onto sidewalks. A 40-minute wait to vote was not uncommon. On Saturday, before the supervisor of elections opened the main polling site of Duval County at 7 a.m., a line of almost 100 voters, all black, had already formed. Within a half-hour, the line had doubled in length.

“I think the going sentiment was that Obama wouldn’t get the same rally cry this year as last time, but Florida woke up a sleeping giant that’s showing its defiance,” Mr. Diamond said. “I hate to say it, but Republicans probably would have done better if they had not tampered with early voting.”

Still, the pastors took pains not to advocate any particular candidate from the pulpit, because doing so could open their churches’ tax-exempt status to question.

Turnout for Mitt Romney also looked strong at several polling sites across Jacksonville, and his campaign was canvassing neighborhoods and calling residents from phone banks to remind them to vote early. One office had a goal of 5,000 calls on Saturday. (As of noon, 403 had been made.)

“We’re dedicated,” said Carolyn Hardin, 60, a Romney campaign volunteer working the phones. “I’ll do this as many hours as I can. The most important thing is turnout.”

In Gainesville, Tallahassee and Miami, the Obama campaign organized “communities of faith” to march to polls together on Sunday. And they did.

The Rev. R. L. Gundy, pastor of Mount Sinai Missionary Baptist Church and the state president of the Southern Christian Leadership Conference, led prayers outside the office of the supervisor of elections on Saturday morning, before the polls opened.

“Our ancestors paid a dear price to have a right to vote, and we don’t take it for granted,” he told a crowd. “Yet the enemy does all it can to disenfranchise us. God, go with us into these polls and every poll around the country.”

Many of the voters listening to Mr. Gundy had spent the night sleeping in tents and recreational vehicles near the polling site. Their plan was to “occupy the polls,” so to speak, in an attempt to raise awareness about the schedule changes.

Some who spent the night at the polls had been organized by Florida New Majority, a nonprofit civic engagement group that helped bring black fraternities, military veterans and faith groups together across the state to turn out voters. And, of course, there were Obama campaign volunteers and union representatives on site. The campaign organized at least two major rallies in Jacksonville on Sunday.

One campaign volunteer, Veronica Glover, 49, had been making calls and canvassing neighborhoods on evenings and weekends since June to tell Obama supporters about the new voting rules. “Wind can’t stop me, rain can’t stop me,” she said. “I’ll be calling. I’ll be knocking. It’s crunch time now. Not next weekend. Now.”

Evie Welch, a member of St. Paul African Methodist Episcopal Church, spent her weekend going to stores in her neighborhood and passing out posters that said “African-Americans for Obama.”

Governor Scott and legislators have consistently defended the changes to early voting as necessary to combat fraud, and they reject the notion that the revised schedule burdens any one demographic group, no matter how much many blacks disagree.

“Early voting was successful for blacks and Obama,” said Mr. Diamond, the pastor. “That’s why they took it away.”

Mary Eunice, a retired pharmacy technician and member of Mr. Diamond’s church, walked directly from her pew after the service on Sunday onto a bus headed for the closest polling place. “I usually wait until Tuesday, but today, since the pastor is urging it, I’m going to take this ride and go,” she said.

At the Northside Church of Christ on Sunday morning, its senior pastor, Charlie McClendon, strongly encouraged congregants to head to the polls directly after Bible study.

Jay Johnson, 42, followed that advice. Outside his polling place, he said: “Take away some early voting and people are definitely going to get out and early vote. I’d say this was a plan that backfired.”