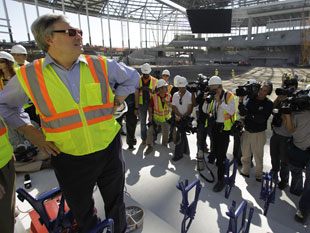 Marlins owner Jeffrey Loria tours Miami’s new ballpark last February. (AP)Could the new Marlins ballpark or the Tampa Bay Rays’ Tropicana Field serve as a homeless shelter for the 270 or so nights a year that they’re not used for baseball?

If two Florida lawmakers have their way, they might. As reported by the Miami Herald, state legislators have unearthed an obscure law that has not been enforced since it was adopted in 1988. It states that any ballpark or stadium that receives taxpayer money shall serve as a homeless shelter on the dates that it is not in use.

Now, a new bill would punish owners of teams who play in publicly funded stadiums if they don’t provide a haven for the homeless. Affected ballparks would include the Miami Marlins’ new ballpark in Miami’s Little Havana, the Tampa Bay Rays’ Tropicana Field in St. Petersburg and several spring training facilities. It also includes the homes of the Tampa Bay Buccaneers, Tampa Bay Lightning, Miami Heat, Jacksonville Jaguars and Florida Panthers.

The newspaper estimates that owners might have to return $30 million in benefits that were already bestowed if the bill passes and they can’t prove they were running homeless shelters (to the newspaper’s knowledge, no teams have been).

From the Miami Herald:

Senate Bill 816, which would make teams and stadium owners return millions of taxpayer dollars if they can’t prove that they’ve been operating as a haven for the homeless on non-event nights,  passed its first committee in the Senate on Monday with a unanimous vote.

“We have spent over $300 million supporting teams that can afford to pay a guy $7, $8, $10 million a year to throw a baseball 90 feet. I think they can pay for their own stadium,”  said Sen. Michael Bennett, R-Bradenton, who is sponsoring the bill.  “I can not believe that we’re going to cut money out of Medicaid and take it away from the homeless and take it away from the poor and impoverished, and we’re continuing to support people who are billionaires.”

With this being an election year, it’s not too much of a surprise that state lawmakers might find a headline-grabbing way to show that they’re concerned about the rights of the little people. And what better target than professional sports, where exorbitant salaries and construction costs are printed in the newspaper every day?

I don’t suspect that this bill will pass, though. The rich folk behind the ballparks have way too much lobbying power. The homeless advocacy does not. It’s simple math.

I have to admit that it’s a pretty noble thought if the lawmakers are sincere, though. One of the biggest struggles that homeless shelters face is finding suitable real estate and it’s not as if they’d be given the run of the ballparks or arenas. A simple corridor lined with cots each night could go a long way to helping a lot of people. I’d be interested to hear what Rays manager Joe Maddon — a big advocate for the homeless — thinks of all this.

Also, the thought of Marlins owner Jeffrey Loria ladling soup and handing out bedrolls while worrying about someone messing with his giant fish tanks or art sculptures amuses me way more than it should.