TALLAHASSEE, Fla. — Changes under Republican Gov. Rick Scott are making it more difficult for Florida’s former felons to get their voting rights restored, which critics say has suppressed the minority vote and hurt Democratic candidates.
As one of his first actions after taking office in 2011, Scott, as chairman of the Florida Board of Executive Clemency, undid automatic restoration of voting rights for nonviolent ex-offenders that previous Gov. Charlie Crist helped adopt in 2007. Since then, the number of former felons who have had their voting rights restored has slowed to a trickle, even compared with the year before Crist and the clemency board helped make the process easier.
Civil liberties activists say Florida’s rights restoration rules are the most restrictive in the nation and have the effect, if not the intent, of suppressing the minority vote. A disproportionate number of black Floridians are convicted felons – 16.5 percent of Floridians are black, yet black inmates make up 31.5 percent of the state’s prison population – meaning a higher percentage of African-Americans don’t have the right to vote after completing their sentences. 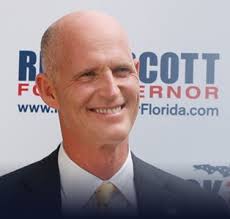