ORLANDO, Fla./CAPE CANAVERAL, Florida (Reuters) – A Florida police officer fired over his use of shooting targets with an image resembling slain teenager Trayvon Martin is defending himself onYouTube, saying the target was intended as a “no shoot” training aid for an instructional session.

Former Port Canaveral police officer Ron King said in a video on YouTube this weekend that the targets, which appear to depict Martin the night he was killed, were meant to prevent such tragedies in the future.

“I can tell you that using real life situations as a training scenario is not uncommon … They are in fact what teach us to respond to incidents in the future,” King said.
“The only stupid act I performed was to believe that some of my co-workers would be mature enough and care enough to use a bad situation as a learning tool,” he added.

King confirmed to ABCnews.com that he was the man in the YouTube video. He could not immediately be reached by Reuters. 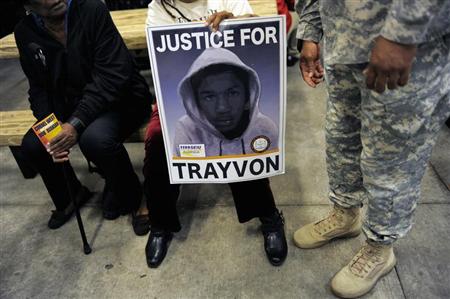 Reuters/Reuters – Supporters gather to join a candlelight vigil at the exact moment when teenager Trayvon Martin was shot one year ago by neighborhood watch volunteer George Zimmerman in Sanford, Florida February 26, 2013. REUTERS/Brian Blanco


King, who described himself as a 25-year law enforcement officer and a longtime firearms instructor, was fired on Friday after bringing the targets to the Brevard Community College shooting range in Cocoa, Florida, in early April while on duty.
He described the targets as a silhouette of a faceless person wearing a hoodie with his hands in his pockets and holding two non-threatening items. He compared their use to other realistic training sessions depicting bank robberies, traffic stops and school shootings.
Martin, a black 17-year-old, was wearing a hoodie when he was shot in February 2012 by a neighborhood watch captain in a gated community in Sanford, Florida. In Martin’s pockets were a can of tea and a bag of candy, which he bought at a neighborhood convenience store.
The then-watch captain, George Zimmerman, is set to stand trial on a second-degree murder charge on June 10. The killing drew national attention and accusations of racism after the police initially declined to arrest Zimmerman.

“It is absolutely reprehensible that a high-ranking member of the Port Canaveral Police, sworn to protect and serve Floridians, would use the image of a dead child as target practice,” Martin familylawyer and spokesman Ben Crump said in a statement released to Reuters on Sunday.

The port’s interim chief executive, John Walsh, apologized to the community, saying the use of targets that resembled the slain teen “was unacceptable,” Port Canaveral spokeswoman Rosalind Harvey said.
King, who was hired in January 2011 and previously worked with the Melbourne, Florida, police department, has seven days to appeal the decision, she added.
King said on YouTube that the targets were never used. King acknowledged he offered a target to another sergeant for his son, and let the sergeant take a picture of the target, which he now says was wrong.
King said that sergeant filed the complaint against him. King issued an apology to the Martin family in which he indicated he believes the shooting target complaint was politically motivated.
“To the Martin family, I would like to apologize again for those law enforcement officials that chose to use your son’s death as an element of their personal and political gains. I assure you that the use of these targets that are in question is to prevent a tragedy from taking place,” King said.