(Reuters) – The Food Network said on Friday it would drop celebrity chef Paula Deen after the Southern food doyenne was sued for racial discrimination and admitted in a legal deposition to using a racial slur in the past.
The impending loss of Deen’s broadcast deal represents a potentially huge setback for a television personality who has built an empire on high calorie food, with cookbooks and restaurants in her native Georgia and other states.
The Food Network said in a statement it “will not renew Paula Deen’s contract when it expires at the end of this month.”
A spokeswoman declined further comment but the network, which is owned by Scripps Network Interactive Inc, said on Thursday it “does not tolerate any form of discrimination and is a strong proponent of diversity and inclusion.”
The network’s decision to drop Deen was announced hours after she failed to make a scheduled appearance on the NBC television morning show “Today” to discuss the controversy. She later apologized on video that was posted online.
“I want to apologize to everybody for the wrong that I’ve done. I want to learn and grow from this,” Deen said in one video posted on YouTube and other websites. 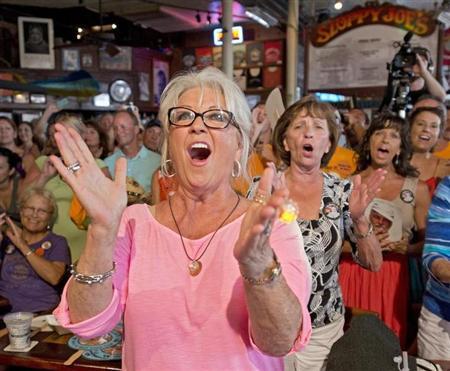 
The controversy surrounding Deen erupted earlier this week when a deposition was released in transcript form in which Deen, who is white, was asked if she had used the “N-word,” and responded, “Yes, of course.” The “N-word” is a euphemism for “nigger,” an epithet for black people.
Asked about the epithet in the deposition, Deen said she had used the slur when describing, probably to her husband, how a black man robbed a bank where she was working in the 1980s. She said she had used the word since, “but it’s been a very long time.”
A former employee of Paula Deen Enterprises, Lisa Jackson, is suing Deen and her brother, Earl “Bubba” Hiers, in federal court alleging racial and sexual discrimination in the workplace. The deposition was related to the lawsuit.
The lawsuit alleges that, while discussing with Jackson plans for Hiers’ 2007 wedding, Deen said she wanted a “true southern plantation-style wedding.”
“Well, what I would really like is a bunch of little niggers to wear long-sleeve white shirts, black shorts and black bow ties, you know in the Shirley Temple days, they used to tap dance around,” Deen said, according to the lawsuit.
‘PLENTY OF MISTAKES’
In one video message posted on Friday to YouTube, Deen apologized to “Today” host Matt Lauer for failing to show up for her interview, as she tried to reach out directly to the public.
“I want people to understand that my family and I are not the kind of people that the press is wanting to say we are,” Deen said in that message.
In another video statement posted on YouTube and other websites, Deen said she had made “plenty of mistakes along the way.”
“But I beg you, my children, my team, my fans, my partners, I beg for your forgiveness,” she said.
Deen did not directly mention the lawsuit or her deposition in either of the two widely shared video statements.
A spokeswoman for Deen did not return calls or an e-mail seeking comment.
Howard Bragman, vice chairman of the reputation management service Reputation.com, told Reuters the chef “needs to be honest, emotional and convincing.”
“She’s never going to come back whole, she’s never going to come back to where she once was,” Bragman said in a phone interview. “Do I think she can salvage some measure of a career? Yes I do, there’s a lot of people who still like her – the butter manufacturers of America. But she’s never going to come back whole.”
Long before becoming a celebrity chef, in 1989 Deen started out of her home a catering service called The Bag Lady. It later became the critically acclaimed restaurant The Lady and Sons in Savannah, Georgia.
Her show “Paula’s Home Cooking” debuted on The Food Network in 2002 and her program “Paula’s Best Dishes” premiered in 2008. She had a longstanding love for butter as an ingredient, but after revealing last year that she had Type 2 diabetes, she became a paid spokeswoman for drug maker Novo Nordisk and introduced light recipes.
(Additional reporting by Colleen Jenkins in Winston-Salem and David Beasley in Atlanta; Editing by Jim Loney, David Storey, Toni Reinhold)