By BRYAN MEALER
Published: February 2, 2013
WHEN the Baltimore Ravens and the San Francisco 49ers take the field during the Super Bowl today, the teams will have five players who come from a small, conflicted region in the northern Everglades known as Muck City. The dark, silty soil surrounding the Florida towns of Belle Glade and Pahokee, some 45 miles west of Palm Beach, creates a fertile region for agriculture.

Many of the black residents of the area were drawn there by the opportunity to work in the vegetable fields that surrounded the towns. The migrant workers, who by and large settled in run-down boardinghouses, began participating in two extraordinary football programs. The public high schools in Belle Glade and Pahokee, located eight miles apart, have sent at least 60 players to the National Football League, including the five who will suit up today: for Baltimore, Anquan Boldin, Deonte Thompson, Damien Berry and Pernell McPhee; for San Francisco, Ray McDonald.

But even more extraordinary is the world that produced these players. Official unemployment in Belle Glade hovers around 16 percent, although the town’s mayor believes it’s closer to 40 percent. In the Glades, the “official” jobless rate has always been a joke because so few people are even on the books. Many of the agricultural jobs disappeared as vegetable production turned into sugar growing, now largely mechanized. 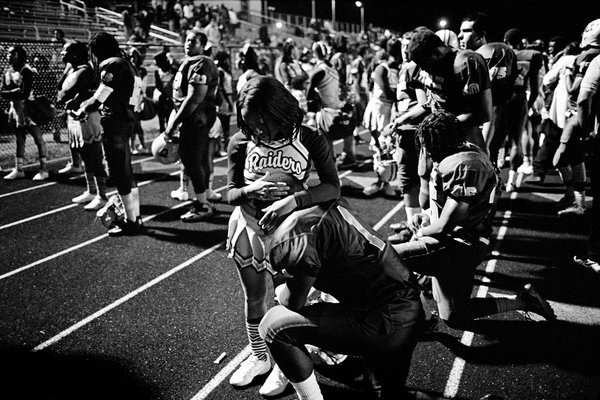 A football player is comforted by his girlfriend after the Raiders lose a crucial game that puts the 2012 state title out of reach.

In 2010, the Palm Beach County sheriff’s office estimated that half of the young men in Belle Glade between the ages of 18 and 25 had felony convictions. The town’s migrant quarter resembles something on the outskirts of Port-au-Prince, Haiti, or Kampala in Uganda. Some families have recently resorted to catching rainwater to survive because their utilities have been cut off for nonpayment.

In the ’80s, when the towns began exporting receivers and running backs to elite college programs far and wide, the region was notorious for having a very high AIDS rate. Drugs and shootings are inescapable.

In 2008, Norman Griffith, the captain of the Pahokee Blue Devils, was killed in a robbery after a game. In 2000, a linebacker for the Glades Central Raiders, Jyron Seider, was gunned down after a dice game.

In Muck City, the well-worn line that “football is like religion” doesn’t even begin to convey its importance. Football is salvation itself, a fleeting window of escape from a place where prison or early death are real and likely outcomes.