By GINA KOLATA
Published: December 24, 2012
In a move likely to renew a longstanding ethical controversy, geneticists are quietly making plans to study the DNA of Adam Lanza, 20, who killed 20 children and seven adults in Newtown, Conn. Their work will be an effort to discover biological clues to extreme violence.
The researchers, at the University of Connecticut, confirmed their plans through a spokeswoman but declined to provide details. But other experts speculated that the geneticists might look for mutations that might be associated with mental illnesses and ones that might also increase the risk for violence.
They could look at all of Mr. Lanza’s genes, searching for something unusual like gene duplications or deletions or unexpected mutations, or they might determine the sequence of his entire genome, the genes and the vast regions of DNA that are not genes, in an extended search for aberrations that could determine which genes are active and how active they are.
But whatever they do, this apparently is the first time researchers will attempt a detailed study of the DNA of a mass killer.
Some researchers, like Dr. Arthur Beaudet, a professor at the Baylor College of Medicine and the chairman of its department of molecular and human genetics, applaud the effort. He believes that the acts committed by men like Mr. Lanza and the gunmen in other rampages in recent years — at Columbine High School and in Aurora, Colo., in Norway, in Tucson and at Virginia Tech — are so far off the charts of normal behavior that there must be genetic changes driving them.
“We can’t afford not to do this research,” Dr. Beaudet said.
Other scientists are not so sure. They worry that this research could eventually stigmatize people who have never committed a crime but who turn out to have a genetic aberration also found in a mass murder. 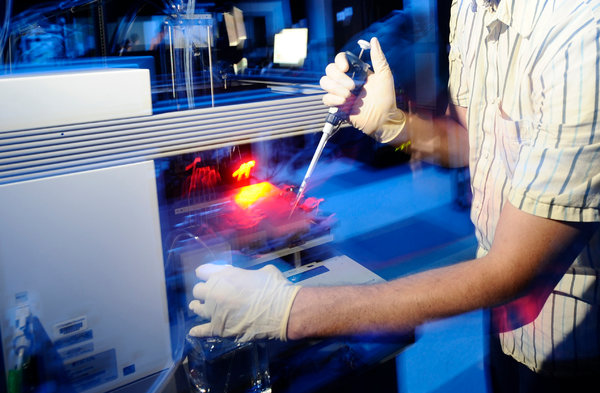 Genomic analysis will be used to study the DNA of the man responsible for killing 20 children and seven adults in Newtown, Conn, in an effort to discover if there are biological clues to extreme violence.


Everything known about mental illness, these skeptics say, argues that there are likely to be hundreds of genes involved in extreme violent behavior, not to mention a variety of environmental influences, and that all of these factors can interact in complex and unpredictable ways.
“It is almost inconceivable that there is a common genetic factor” to be found in mass murders, said Dr. Robert C. Green, a geneticist and neurologist at Harvard Medical School. “I think it says more about us that we wish there was something like this. We wish there was an explanation.”
Scientists are well aware of the fraught history behind the questions of biology and violence.
In the early 20th century, claims that criminal behavior was inherited arose during the eugenics movement and led to sterilizations of mental patients and felons.
On Christmas Day in 1965, two researchers published a paper saying men with an extra Y chromosome, the chromosome that confers maleness, were “super males” and born criminals. The hypothesis was helped along by the fact that these men “fit the classic Hollywood criminal — big, awkward, thuglike and with low I.Q.’s,” said Dr. Philip Reilly, a lawyer and clinical geneticist who has studied this history.
The idea persisted for about 15 years, Dr. Reilly said, but eventually the epidemiological evidence convinced scientists that these men were no more violent than men without an extra Y chromosome.
In 1993, in a paper published in the journal Science, researchers reported that a mutation leading to a lack of the enzyme monoamine oxidase caused violence in a Dutch family. Every family member who inherited the mutation was a violent criminal; those without it had no criminal behaviors.
“It was a stunning piece of work,” said James Blair, the chief of the unit on affective cognitive neuroscience at the National Institute of Mental Health. But, he added, it turned out not to be generalizable. For the most part, “it was just this family,” he said.
The National Institutes of Health was embroiled in controversy about 20 years ago simply for proposing to study the biological underpinnings of violence. Critics accused researchers of racism and singling out minorities, especially black men.
Shortly after, the N.I.H. took back financing for a conference at the University of Maryland to examine genetics and criminal behavior. The conference was canceled.
But genetics has come of age in recent years with new and powerful methods to determine DNA sequences and analyze the results. Studies of people at the far end of a bell curve can be especially informative, because the genetic roots of their conditions can be stark and easy to spot, noted J. H. Pate Skene, a Duke University neurobiologist.
“I think doing research on outliers, people at an end of a spectrum on something of concern like violent behavior, is certainly a good idea,” he said, but he advised tempering expectations.
“I would call it a caution, not about whether to do this research but about what to expect,” he added.
Perhaps it will be fruitless to search for one or a few major gene mutations that always lead to extreme violence, Dr. Beaudet said. But what if a significant fraction of the shootings were linked to gene variants? What if scientists were to discover genes that were risk factors, increasing a person’s chance of violent behavior but not foreordaining it?
“If we know someone has a 2 percent chance or a 10 percent chance or a 20 percent chance of violent behavior, what would you do with that person?” Dr. Skene said. “They have not been convicted of anything — have not done anything wrong.”
But a genetic profile might play a role if someone were convicted of violent offenses, Dr. Beaudet countered. Criminals are routinely denied parole based solely on psychiatric evaluations. Perhaps a genetic test could add to the certainty of the decision, he said.
Ultimately, understanding the genetics of violence might enable researchers to find ways to intervene before a person commits a horrific crime. But that goal would be difficult to achieve, and the pursuit of it risks jeopardizing personal liberties. Some scientists shudder at the thought of labeling people potential violent criminals.
“The idea of screening with a view of preventing those kinds of incidents is basically unthinkable,” said Dr. Steven E. Hyman, director of the Stanley Center for Psychiatric Research at the Broad Institute of Harvard and M.I.T. “You would fail. You would stigmatize.”
Some day, he added, it might be important to know the phenotypes — the characteristics — of violent killers and have their DNA, but not for the reasons many think.
“I am always happy to store DNA and phenotype information and freeze cells, thinking that one day we would have usable clues,” Dr. Hyman added. “But that would be biology, not prevention.”

Soldier faces death penalty for 'locking girlfriend's son, 10, in a dungeon and starving him to death'

Africans unite to save Norwegians from dying of frostbite (Satire)