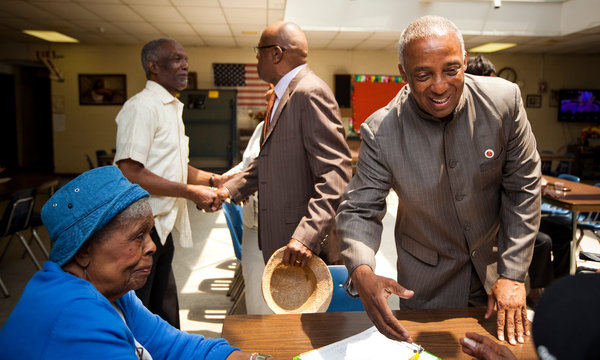 In the primary race for a Brooklyn Congressional seat, Councilman Charles Barron, right, has received the blessing of the man he wants to replace, Representative Edolphus Towns, center.

Suddenly, Charles Barron has regained the ability to shock.

The New York political world had long ago become accustomed to the incendiary words of Mr. Barron, a confrontational onetime Black Panther turned three-term City Councilman. His more outrageous remarks over the years, from calling Thomas Jefferson a pedophile to likening Gaza to a “concentration death camp” to expressing his desire to slap “the closest white person,” have given way to a reputation as a showboat and provocateur on the political fringe. 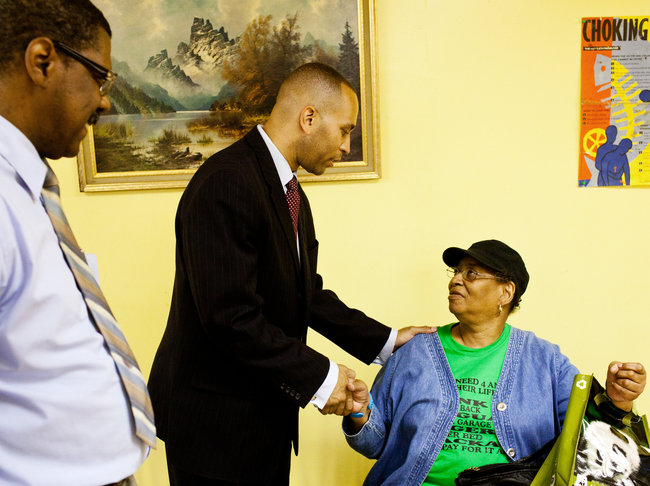 Assemblyman Hakeem S. Jeffries, center, has raised far more money and received far more support from the political establishment than Mr. Barron, and was expected to coast to victory.

Considered an afterthought when he announced his candidacy for the United States Congress last November — in a speech in which he called Muammar el-Qaddafi “my hero” and pledged to never salute the American flag — Democratic leaders are now fretfully talking about a prospect they once considered unthinkable: a Congressman Barron.

His opponent, Hakeem S. Jeffries, a state assemblyman and self-styled conciliator who has raised far more money and received far more support from the political establishment, was expected to coast to victory. So there was surprise when Mr. Barron picked up the endorsement of the city’s largest public employees union and the blessing of the man he wants to replace, Representative Edolphus Towns, who will retire. With 10 days to go before the Democratic primary, it has became clear that Mr. Barron is gaining traction, with the help of a passionate voter base in the historically black Brooklyn neighborhoods where his roots run deep.

There are signs of panic among members of the Democratic establishment, who worry Mr. Barron could prove to be a headache in their ranks and an alienating figure on the national stage.

Popular Democrats abruptly emerged this week to denounce him as a dangerous, anti-Israel radical. Edward I. Koch, the former mayor, called him a viper; other community leaders pointed reporters to the Anti-Defamation League’s list of his more provocative quotes; and in an e-mail to supporters this week, a local group of Russian Jews announced a hastily planned rally on Monday to denounce Mr. Barron as “a fringe radical and anti-Semitic, anti-Israel activist.” The first word of the subject line said it all: EMERGENCY.

In an interview, Mr. Barron would not comment on past statements, calling them “a distraction” from the issues, raised by people who are frightened by his campaign’s “building momentum.”

“Sometimes my being assertive and speaking truth to power become reduced to controversial and defiant,” he said, adding later, “I raise contradictions when I feel people who have suffered cause suffering to other people.”

The sudden rise in Mr. Barron’s fortunes has overshadowed Mr. Jeffries, who has been viewed as a rising star in New York politics with his ability to bring together white and black, rich and poor, the gentrifiers and the gentrified. Mr. Jeffries’s campaign chest is many times the size of Mr. Barron’s, having collected by this week $769,544 from 2,447 donors. Mr. Barron missed a deadline to report his contributions, but said he had almost $70,000, most of it his own money.

In some ways, the race offers a contrast between two different eras. Mr. Barron, 61, represents a throwback to the 1970s and 1980s, when black nationalists seemed to control the city’s racial conversation, while Mr. Jeffries, 41, represents the more recent model of black leaders like President Obama; Newark’s mayor, Cory A. Booker; and Gov. Deval Patrick of Massachusetts, who have earned establishment credentials and thrived by building coalitions with white liberals.

That difference was suggested by Congresswoman Yvette D. Clarke as she campaigned with Mr. Jeffries at the Abe Stark Senior Center in Canarsie. She said that Mr. Barron had a “style of politics that appeals to some groups” but that Mr. Jeffries represented “the future of Brooklyn.”

Mr. Barron leavens his belligerent streak with humor, and has an engaging manner when it comes to the kind of small talk required while shaking hands with prospective voters at senior centers and subway stops. Even some of his opponents call him charming. And he has won deep support within his district for showing up at the scene whenever a young black person is wounded by the police.

The district, newly configured and renamed as a result of the 2010 Census, stretches through the spine of Brooklyn and spills over into Queens. It takes in the poor and working-class housing projects of Brownsville, East New York, Canarsie and Coney Island but also middle-class and increasingly affluent brownstone areas like Clinton Hill, Fort Greene and Prospect Heights, as well as the stouter homes of Manhattan Beach, Marine Park and Howard Beach. Both candidates are African-American in a district that is 53 percent black, but the outcome of the primary may hinge on the reality that the recent redistricting has introduced large pockets of white voters (22.4 percent) and Hispanic voters (18 percent). The district also includes large Jewish enclaves.

Because relatively few voters turn up in primaries — particularly a primary held in June for the first time in 40 years — the unions’ ability to pull their members and other residents to the polls is regarded as crucial, according to Hank Sheinkopf, a political consultant. Mr. Jeffries has received a slew of union endorsements like those of the Transport Workers Union and 1199 SEIU, which represents health care workers. Mr. Barron surprised many in the political world when he snagged the support of DC 37, the city’s largest public employees union. Both candidates claim records for addressing the district’s perennial complaints: rundown housing, ineffective schools, wide unemployment and what many residents see as overly harsh police tactics.

But in contrast to many of the Democratic primary battles throughout the city, this one includes sharp policy differences between candidates. Mr. Barron opposes gay marriage; Mr. Jeffries co-sponsored the legislation that legalized it. Mr. Barron is an outspoken critic of Israeli policies; Mr. Jeffries visited Israel in 2008 with the Jewish Community Relations Council. Locally, Mr. Barron opposed the building of a basketball arena and the rest of the Atlantic Yards project near downtown Brooklyn; Mr. Jeffries has sought to mitigate its impact and criticized the developer for not delivering on promised housing.

And while Mr. Jeffries takes pride in his crossover appeal, Mr. Barron has made little effort to broaden his base. Instead, he continues to use loaded language, upsetting his white and Jewish colleagues with phrases emblematic of the Holocaust; he might, for example, accuse Israel of genocide. David Greenfield, a City Council member and the grandson of Holocaust survivors, said Mr. Barron, if elected, would become “the most prominent anti-Semite in Congress.”

Mr. Barron, who has been married for 29 years to Inez D. Barron, currently a state assemblywoman, and has two grown children, Jelani and Jawanza, was raised in a housing project on the Lower East Side and graduated from Hunter College as a sociology major. He was chief of staff for a community activist, the Rev. Herbert Daughtry of Brooklyn’s House of the Lord Church before running for the council in 2001. Privately, lawmakers say that Mr. Barron is a warm and earnest presence in the City Council, but say they have little patience for his antics. In 2010 Christine C. Quinn, the speaker, stripped him of his chairmanship of the Higher Education Committee.

Mr. Jeffries grew up in Crown Heights, the son of a social worker and a case worker, graduated from Binghamton University and received a law degree from New York University. He clerked for a federal judge, practiced law at the prestigious Paul, Weiss, Rifkind, Wharton & Garrison firm for four years and won an Assembly seat in 2006. He lives in Prospect Heights with his wife, Kennisandra, and two sons, Jeremiah, 10, and Joshua, 8.

“Charles Barron has adopted a confrontational style,” he said in an interview. “I work hard to bring people together to get things accomplished. People will ultimately decide which approach is more effective.”