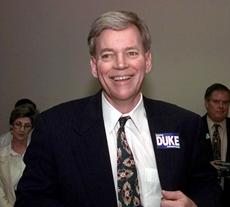 David Duke, a former Louisiana lawmaker and Ku Klux Klan leader, is reportedly thinking of running for president next year.

The Daily Beast says Duke is launching a 25-city tour this month “to explore how much support he can garner for a potential presidential bid.”

Duke, a former grand wizard of the Klan in Louisiana, ran for president as a Republican in 1992 and as a Democrat in 1988. He has also made unsuccessful bids for Louisiana governor and Congress.

Duke’s website promotes his views and contains posts such as a piece on “government-mandated racism against whites” and a doctored photo of President Obama wearing an outlandish hat and mustache.

Duke, 61, served in the Louisiana House from 1990 to 1992 as a Republican. In a high-profile 1991 race that garnered some national attention, Duke beat then-governor Buddy Roemer in a GOP primary for the party’s nomination. Duke lost the governor’s race to Democrat Edwin Edwards.

Video: Male student claims he was unfairly suspended for wearing a SKIRT to school, but not for wig or high heels