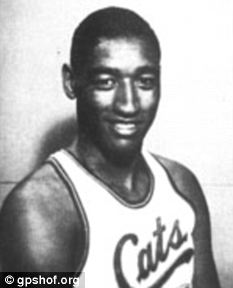 Star: Bob Boozer, an NBA player who lead the U.S. team to Olympic victory in 1960, died over the weekend

During college, Boozer was a two-time All-American at Kansas State University in 1958-59. He proceeded to be the number one NBA draft pick by the Cincinnati Royals.

Boozer played in the NBA for 11 years and played 11 years and retired after winning the 1971 NBA championship with the Milwaukee Bucks.

He averaged 14.8 points and 8.1 rebounds in his NBA career with six teams.

With his formal career beginning during his time at the Royals, he then moved to the New York Knicks, then to the Los Angeles Lakers, then the Chicago Bulls, then to the Seattle SuperSonics and finishing at the Milwaukee Bucks. 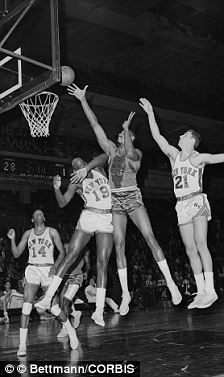 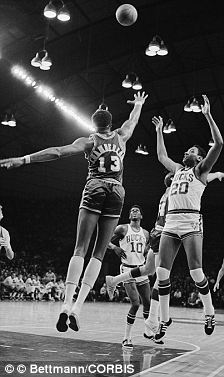 Player: During his 11-year career, Boozer played for the New York Knicks (he is number 14 on the left), and the Milwaukee Bucks (right, number 20)

The accomplishments for the 6-foot-8 forward didn’t stop there.

He played with Jerry West, Oscar Robertson and Jerry Lucas on the 1960 Olympic team, which dominated the competition while going 8-0.

After ending his athletic career, Boozer returned to his hometown of Omaha, Nebraska and began working as an executive at Northwestern Bell telephone company.

In a showing of pride for their native son, Omaha named a road in his honor and was inducted into the Omaha Sports Hall of Fame in 2007.