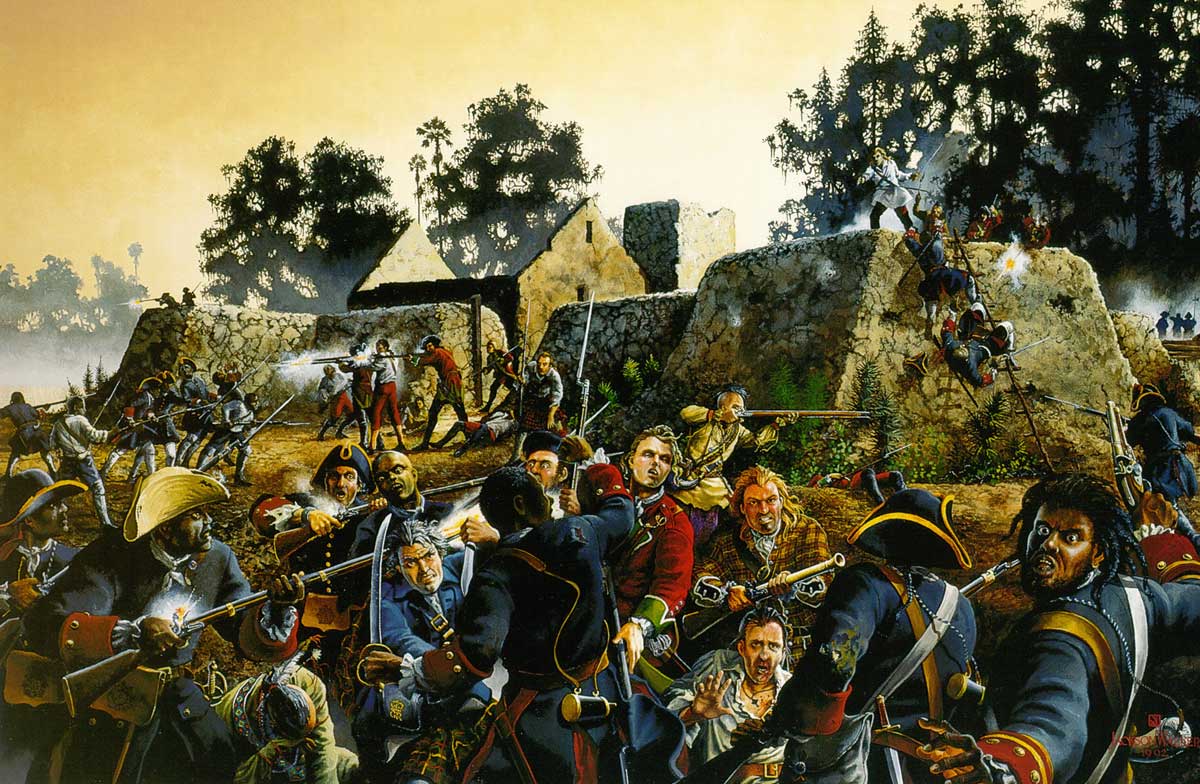 Fort Mose Historic State Park (originally known as Gracia Real de Santa Teresa de Mosé) is a U.S. National Historic Landmark (designated as such on October 12, 1994)[2], located two miles north of St. Augustine, Florida, on the eastern edge of a marsh. The original site of the fort was uncovered in a 1986 archeological dig. The 24-acre site is now a Florida State Park, administered through the Anastasia State Recreation Area. Fort Mose was designated a National Historic Landmark in 1994. The fort has also been known as Fort Moosa or Fort Mossa.

Fort Mose (pronounced “Moh-say”) was the first free black settlement legally sanctioned in what would become the United States. The community began when Florida was a Spanish territory.

As early as 1687, the Spanish government had begun to offer asylum to slaves in British colonies and in 1693 that asylum was made official by the Spanish Crown, that made it known that runaways would find freedom in Florida, in return for Catholic conversion and a term of four years of service to the Crown.[3] In effect, Spain created a maroon colony as a front-line defense against English attacks from the north. Spain also aimed to destabilize the plantation economy of the British colonies to the north by creating a free black community that would serve as a beacon for slaves seeking escape and refuge.

Incoming freedom seekers were recognized as free, taken into the Spanish militia and placed into service at the Gracia Real de Santa Teresa de Mosé military fort north of St. Augustine, which was established in 1738 by the Colonial Governor, Manuel de Montiano. The military leader at the fort was a Creole man of African origin, who was baptized as Francisco Menendez by the Spanish[5] Word of the existence of free black settlement reached the Province of South Carolina to the north and helped to set off the Stono Rebellion in September 1739. During the slave revolt, several dozen blacks attempted to reach Spanish Florida unsuccessfully.

In 1740, British forces led by James Oglethorpe attacked and destroyed the fort in the Siege of Fort Mose. During the siege, a force consisting of Spanish troops, Indian auxiliaries and free black militiamen counterattacked Oglethorpe’s troops, forcing them back to Savannah. Because the fort was destroyed in the attack, its inhabitants relocated to St. Augustine, where they stayed until Fort Mose was rebuilt in 1752. After East Florida was ceded to the British in the Peace of Paris of 1763 most of the inhabitants, including many black militia troops, migrated to Cuba with the evacuating Spanish.[6]

Because Fort Mose became a haven for escaped slaves from the British colonies to the north, it is considered a precursor site of the Underground Railroad. Following the establishment of Charles Town (South Carolina) by the English in 1670, enslaved Africans began making their way down the Atlantic coast to the Spanish settlement at St. Augustine, where they were offered liberty and religious sanctuary.

In 1681, African and African American runaways established Gracia Real de Santa Teresa de Mose, the first free black town within the present-day borders of the United States. Located two miles north of St. Augustine, “Fort Mose” was a frontier community of homesteaders who incorporated incoming fugitives, slaves from St. Augustine, and Indians from nearby villages into a complex family network.

Fort Mose’s militia provided Spain’s northernmost defense in North America, and the captain of the militia, Francisco Men´ndez, was recognized by Florida’s Spanish governor as “chief” of the community.

When Florida was ceded to Britain under the 1763 Treaty of Paris, the free blacks of Mose, along with the rest of the Spanish population of Florida and their Indian allies, all left for Cuba, where they were resettled by the Spanish government. A least 251 British slaves joined the Spanish under the sanctuary policy, and many others fled to the flourishing villages of the Seminoles in North Florida.

It was the intention of the British to replicate the successes of South Carolina, making Florida a plantation province sustained through slave labor. Large numbers of enslaved Africans and African Americans were brought in to work the indigo, rice, sugar, and cotton crops. For most of the 1760s, Carolina- and Georgia-born blacks were in the majority, but in the next decade their number was surpassed by Africans, who were a third less expensive.

During the Revolutionary War, British East Florida became the last loyalist haven in North America. Florida briefly reverted back to Spanish control at the end of the war, before becoming a U.S. territory in 1821.