By LYDIA WARREN
PUBLISHED: 14:25 EST, 9 January 2013 | UPDATED: 16:54 EST, 9 January 2013
Four children have died and another has suffered injuries after a fire ravaged their Atlanta area home on Tuesday night.
The children’s mother, Reba Glass, tried to save the youngsters, but could only reach her son Darnell, who turns six today, and threw him from a second-floor window.

The boy suffered a broken collar bone while his mother, who jumped out the window behind him, sustained 40 per cent burns to her body.
The children who perished – one girl and three boys – were aged eight months, three, seven and nine, police said. 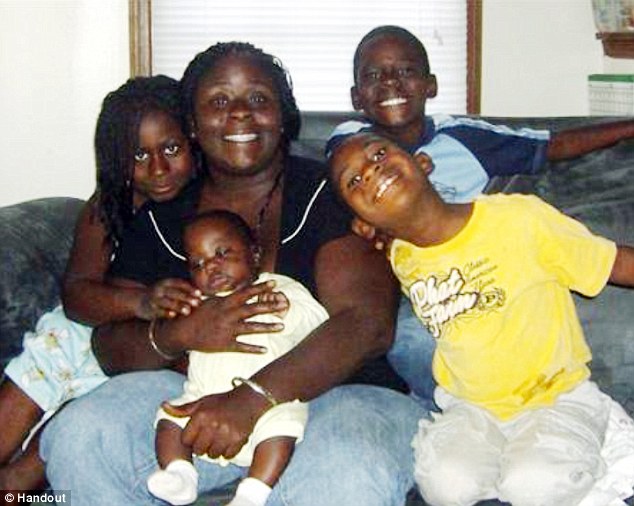 Tragic: A family picture shows Reba Glass and her children. Only Darnell Glass Jr. (in yellow) survived the fire 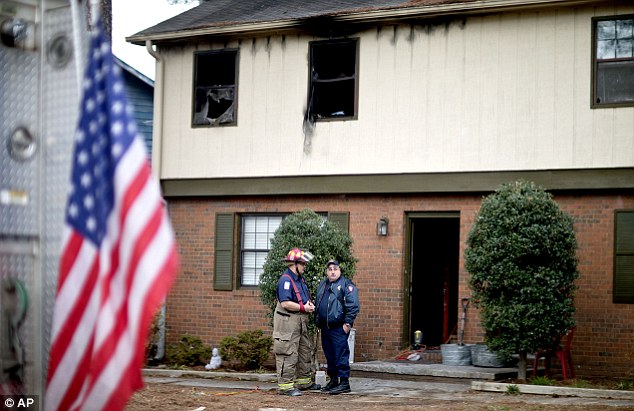 Destroyed: Officials stand outside a home in Conyers, Georgia where four children perished in a house fire 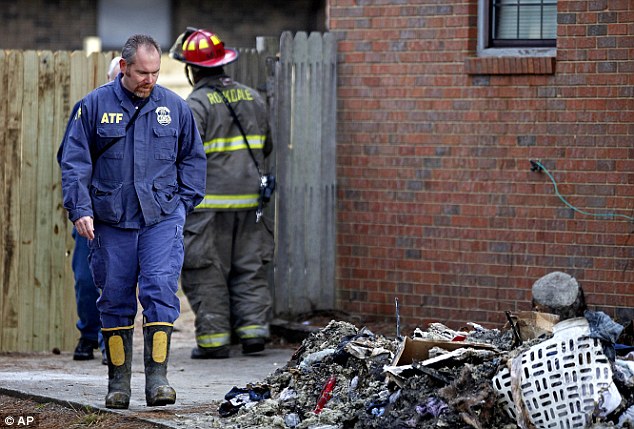 Heartbreak: Their mother tried to save them but could only reach one son, whom she threw from a window

The tragedy unfolded as flames broke out at a duplex in Conyers, east of Atlanta, around 11pm on Tuesday – and neighbours and rescuers tried in vain to save the seven people trapped inside.
Conyers Police Chief Gene Wilson said four officers were on the scene seconds after the fire was reported but were unable to put out the blaze with hand-held extinguishers.

He added that they were met with fierce flames and could not reach the victims inside.

Ms Glass rushed upstairs to save her children, but could only help the six-year-old. Her other children were found dead in two bedrooms on the second floor. 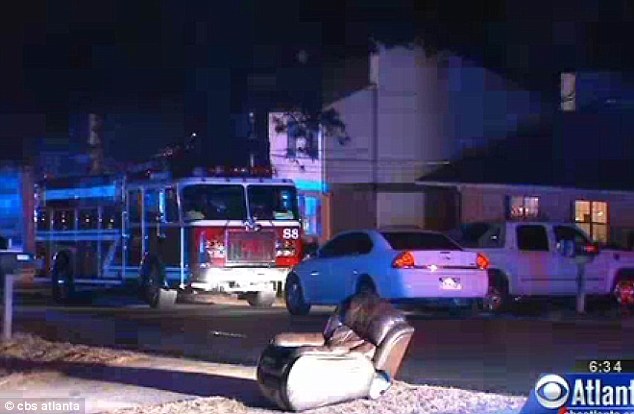 Scene: Firefighters were at the home in Conyers, Georgia seconds after a 911 call was made 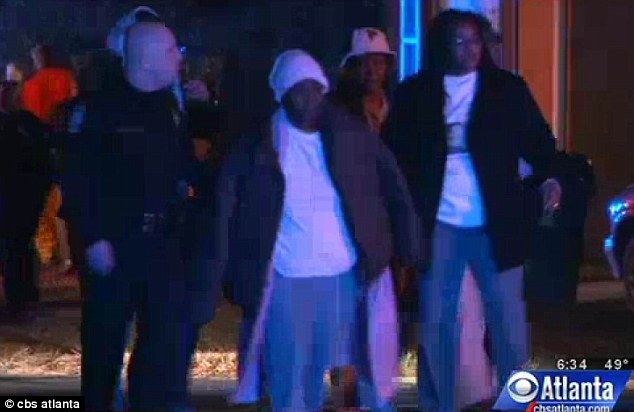 Neighbours said they were yelling at the children to jump from the windows.
‘We started telling them, “Jump out the window, jump out the window”. We kept hearing something like banging on the window, but they didn’t jump,’ Lamonta Stroud said.
The children’s grandmother, Rosetta Mitchell, escaped injury and was seen being led from the home but police said she was extremely distraught.

Glenn Allen, a spokesman for Georgia’s fire commissioner, said the mother was taken to Grady Memorial Hospital in Atlanta with second- and third-degree burns over 40 per cent of her body. 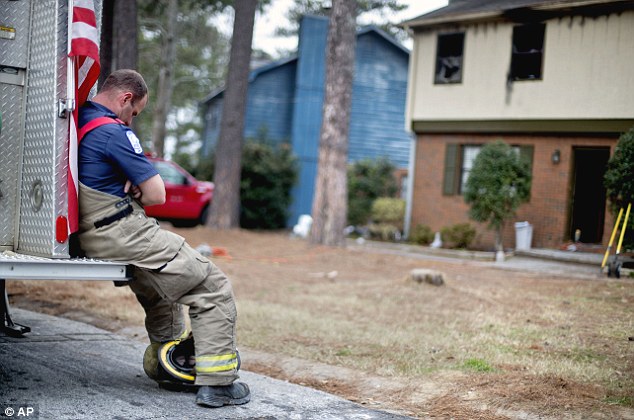 Struggle: A firefighter takes a moment outside the home where the four children died on Tuesday night 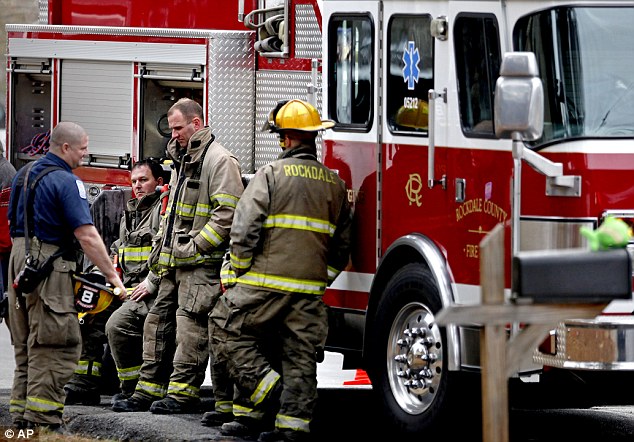 Sadness: Officers had tried to save the children but were forced from the house by the flames

‘I think she jumped out and tried to go back in and then the burns. They say her skin was just coming off,’ neighbour Leslie Slater told WSBTV.
‘I’m devastated. They’re like my children. They come to my house every day all day. They’re my daughter’s best friend.’
Neighbour Tiffany Tillmon added to WTMV: ‘It just makes my heart drop. When [the six-year-old boy] left on the stretcher going out, he was saying bye to everybody. He was like, “I’ll see y’all later.” He wasn’t crying, but he doesn’t know yet what happened.’

Allen said there is no indication yet as to what caused the blaze, but 11 Alive reported that the family had had a fire in a first-floor fireplace. 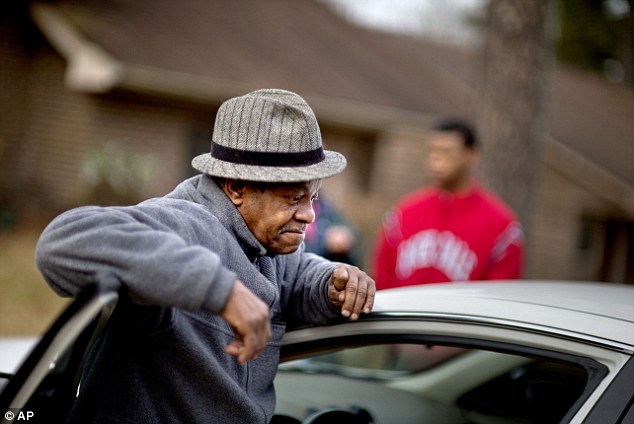 Crestfallen: Neighbour Willie Gibbs, 61, said he was stirred by the tragedy across the street 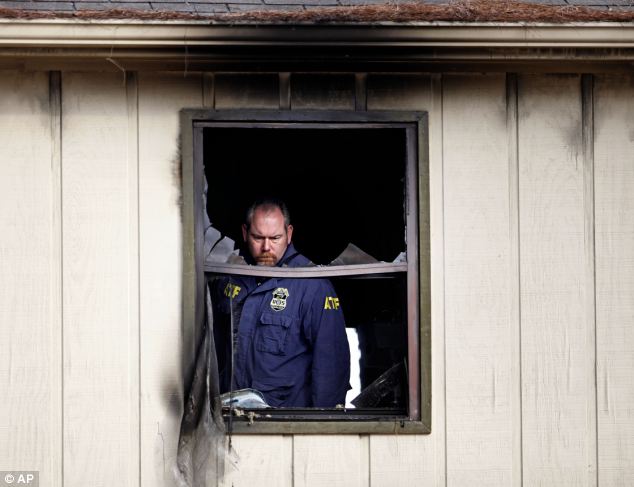 Investigation: Authorities have not yet revealed what caused the fire on the second floor of the home

A fire official told added that there was no evidence the home had smoke detectors.
Most of the flames were contained to the second floor, and the upstairs portion of the house was completely destroyed.
An investigation into the cause of the blaze is ongoing, authorities said.
Read more: http://www.dailymail.co.uk/news/article-2259702/Conyers-house-Four-children-die-injured-mother-tries-save-house-fire.html#ixzz2HWNL8KiW