A ‘functional cure’ for HIV/AIDS can be achieved for some patients diagnosed early, according to new research.

Treating people with HIV rapidly after they have become infected with the virus that causes AIDS may be enough to achieve a ‘functional cure’ in a small proportion of patients, according to the research.

However, the treatment is only effective in about one in ten people diagnosed early, and most people who are infected with HIV do not learn of their infection until the virus has fully taken hold. 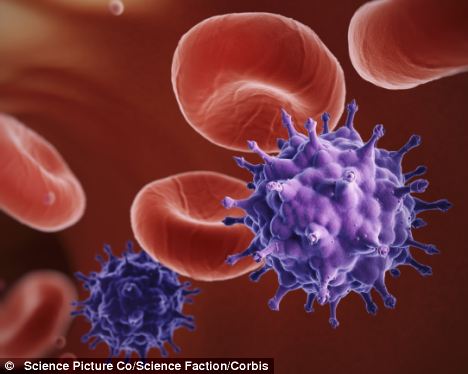 A ‘functional cure’ for HIV/AIDS can be achieved for some patients diagnosed early, according to new research. Image shows a conceptual view of HIV in the bloodstream

Scientists in France followed 14 patients who were treated within ten weeks of becoming infected with the virus.

They received treatment for three years before stopping taking the medication.

The scientists found that even when the patients had been off therapy for more than seven years, they still showed no signs of the virus bouncing back – normally the virus rebounds if treatment is stopped.

The research, published in the journal PLoS Pathogens, follows news earlier this month about a baby girl in Mississippi, U.S., being effectively cured of the human immunodeficiency virus (HIV) after receiving very early treatment.

Christine Rouzioux, a professor at Necker Hospital and University Paris Descartes, and a member of the initial team who identified HIV 30 years ago, said the new results showed the number of infected cells circulating in the blood of these patients, known as ‘post-treatment controllers’, kept falling even without treatment.

‘Early treatment in these patients may have limited the establishment of viral reservoirs, the extent of viral mutations, and preserved immune responses. A combination of those may contribute to control infection in post-treatment controllers,’ she said.

‘The shrinking of viral reservoirs … closely matches the definition of “functional” cure,’ she added. 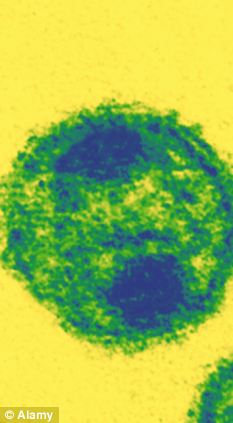 A functional cure describes when the virus is reduced to such low levels that it is kept at bay even without continuing treatment. The virus, however, is still detectable in the body.

Most of the some 34 million people with HIV across the world will have to take anti-AIDS drugs, known as antiretroviral therapy, for the whole of their lives.

These drugs generally keep the disease in check but also have side effects and a high cost impact on health systems.

Worldwide, the number of people newly infected with HIV, which can be transmitted via blood and by semen during sex, is falling.

Asier Saez-Cirion, a senior HIV researcher at the Institute Pasteur in Paris, said that although most patients will not be able to control HIV, these results suggest that at least some may be able to if they get treatment early enough.

‘(This data) and the Mississippi study strongly support early treatment initiation and may hold important clues for the development of a strategy to cure HIV or at least induce a long-term control without the need of antiretroviral treatment,’ he said.
Sir Nick Partridge, Chief Executive of Terrence Higgins Trust, said: ‘Using antiretroviral drugs at the early stages of infection to keep the virus at bay shows some promise.

‘However, much more research is needed to monitor these patients and explore whether the approach has wider applications among larger groups with a range of drug resistance profiles.

‘Treating HIV in this way relies on early intervention and serves to highlight the importance of routine testing to identify HIV infections as soon as possible.

‘While this research may influence how we treat some people with HIV in the future, at present it remains the case that, for the vast majority of people, ceasing treatment will cause them to become very unwell. As research into future treatments continues, it is vital that people use condoms to prevent the spread of HIV today.’
Read more: http://www.dailymail.co.uk/health/article-2293789/HIV-cure-possible-patients-diagnosed-weeks-infection.html#ixzz2NecP2z00

The story of BiDil: the 1st drug in history to receive FDA approval to treat a specific racial group (blacks)