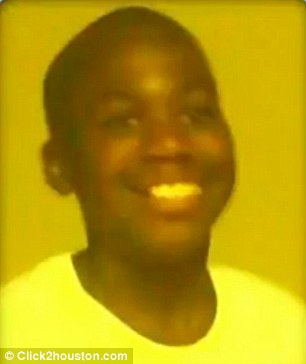 Disruptive history: Banks has been suspended many times in the past year

A 10-year-old boy was arrested and locked up in juvenile detention after throwing a plastic container at his fourth grade teacher and trashing his classroom.

Darren Banks of Houston, Texas, has been held in a juvenile detention center since Wednesday on charges of assaulting a public servant, which is a third-degree felony in Texas that carries a prison sentence of up to 10 years as well as a maximum of $10,000 in fines.

Relatives of the boy, who has a history of detentions and suspensions, are enraged over the school’s reaction to his outburst. They say his transgression was minor and does not warrant the punishment.

But pictures of the Emmott Elementary School classroom following the boy’s disruption indicate that he had more than a minor outburst.

The classroom is in complete disarray with books and papers littering the floor and more than a dozen overturned chairs.

Banks’ great-grandmother, Anna Patterson, said she is appalled by the school’s actions.

‘I was here last night, but they said I couldn’t see him,’ Patterson, 70, said outside the juvenile detention center at a news conference. ‘I didn’t sleep last night. I was really upset.’ 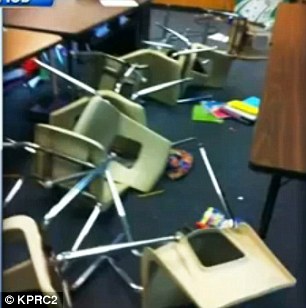 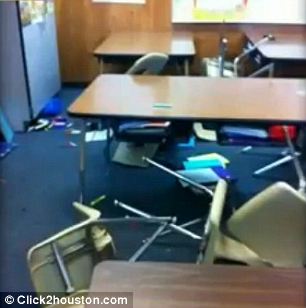 Tiny terror: Darren Banks, 10, of Houston, Texas, has been held in a juvenile detention center since Wednesday on charges of assaulting his teacher during an outburst in his classroom

Patterson said Banks is on medication for attention deficit hyperactivity disorder and that he has been suspended from the elementary school too many times to count. Banks has only attended Emmott Elementary for two semesters.

‘The least little thing he does wrong, they suspend him,’ she said.

School officials didn’t act alone. The Houston district attorney’s office had to agree to the criminal charges in order for the boy to be admitted into the detention center.

A spokeswoman for the school district said Banks’ family is downplaying the extent of his outburst.

‘It includes inaccuracies,’ spokeswoman Kelli Durham said of the family’s account in an interview with the Houston Chronicle. ‘Assault of a public servant — and teachers are considered public servants — is against the law.’ 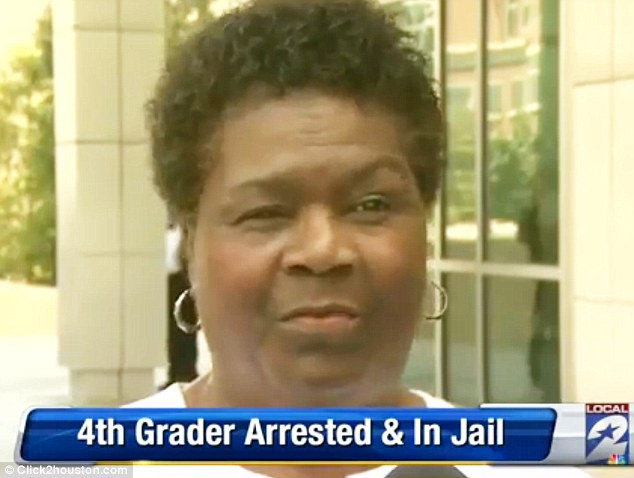 Fighting back: Banks’ great-grandmother, Anna Patterson, said she is appalled by the school’s actions 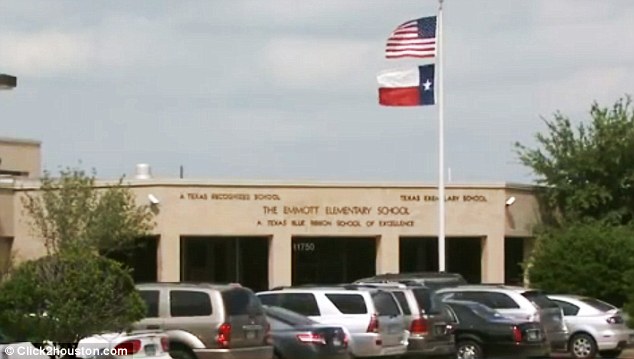 Charged: The Houston district attorney’s office had to agree to the criminal charges in order for the boy to be admitted into the detention center

‘You mean to tell me that in 2012 we’re now locking away children in elementary school for just disrupting the learning environment?’ he said. ‘The zero tolerance policy should be done away with.’

Banks is scheduled for a hearing on Friday that will determine the extent of his stay at the detention center.