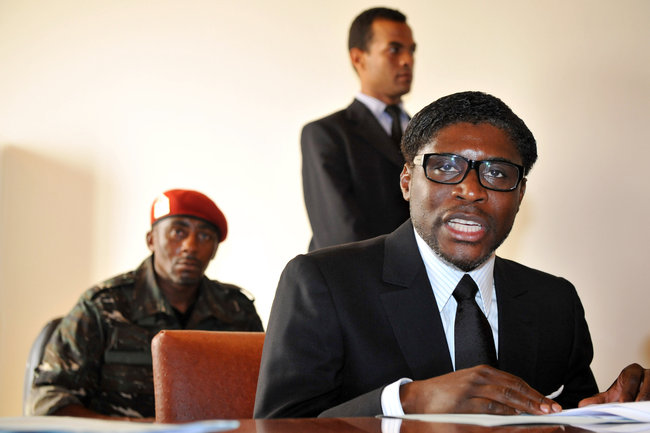 But the police seized the property this month (having taken his $2 million wine collection earlier this year) as part of a corruption investigation involving Mr. Obiang’s father, Teodoro Obiang Nguema Mbasogo, the dictator of Equatorial Guinea, a tiny, impoverished but oil-rich West African state.

Known in France as the case of the ill-gotten gains, it was originally brought in 2007 by two nongovernmental organizations and an association of Congolese citizens abroad. They filed a criminal complaint accusing Mr. Obiang and two other African heads of state, Omar Bongo of Gabon and Denis Sassou-Nguesso of the Republic of Congo, of embezzling state money to buy properties in France illegally. 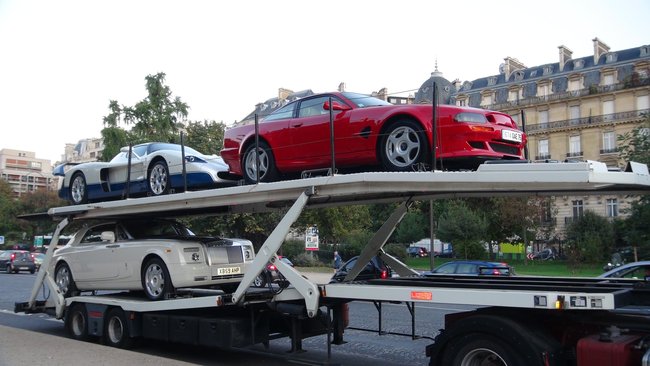 Some of the 11 luxury cars belonging to Mr. Obiang that the French police seized in September.

“We didn’t wish to target the Obiang clan particularly,” said William Bourdon, a lawyer who leads one of the groups that brought the suit, Sherpa, which defends the victims of economic crimes. “But their looting of public funds is quite spectacular.” The suit was joined by Survie, an organization that opposes neocolonialism, and theFédération des Congolais de la Diaspora.

The building at 42 Avenue Foch is thought to be worth as much as $180 million; it was bought by the younger Mr. Obiang, the eldest son of the president, but then sold in 2011 to the state of Equatorial Guinea. The building has 101 rooms, including a Turkish bath, a hair salon, two gym clubs, a nightclub and a movie theater.

The mansion was described in the newspaper Le Parisien as a treasure trove decorated with furniture worth as much as $50 million, including bathrooms with televisions and gold- and jewel-encrusted fixtures and dinner tables “always set to welcome unexpected guests.”

In September, the French police seized 11 luxury cars belonging to Mr. Obiang’s son, including two Bugatti Veyrons, among the most powerful and expensive cars in the world; a Maybach; an Aston Martin; a Ferrari Enzo; a Ferrari 599 GTO; a Rolls-Royce Phantom; and a Maserati MC12.

“We would never see the Obiangs,” said a neighbor who did not want to give his name, “but I was struck by their incredible collection of cars.”

This year, police officers confiscated roomfuls of expensive goods, including bottles of Château Pétrus, among the world’s most expensive wines, and a $3.7 million clock.

According to the newspaper Le Monde, the Obiang art collection here included a Degas and five works by Rodin.

In 2009, Somagui Forestal, the forestry company owned by Mr. Obiang’s son — who was also minister of agriculture and forestry at the time — bought 109 lots for more than $22 million at the auction of the private art collection of Yves Saint Laurent and Pierre Bergé. The lots, which decorated the Paris mansion, included a 16th-century vermeil elephant by Christoph II Ritter.

In addition to the investigation of Mr. Obiang, French judges issued an international arrest warrant for his son in July, accusing him of misuse of public money and company assets, breach of trust and money laundering, the proceeds of which were used to buy French property. Mr. Obiang recently appointed his son second vice president of Equatorial Guinea in an effort to provide him diplomatic immunity. In a similar move last year, shortly after the seizure of the cars, Mr. Obiang named his son a permanent delegate to Unesco. (After months of debate and hand-wringing at Unesco, a science prize sponsored by Equatorial Guinea was awarded in July.)

The country itself, a tiny former Spanish colony of about 720,000 people, became very wealthy in the 1990s after oil was discovered, with per capita income, when currency differences are accounted for, exceeding $50,000 (compared with $43,800 in the United States). But little of that has trickled down. The reason, Western governments and the nongovernmental organizations say, is rampant corruption, much of it benefiting Mr. Obiang, his family and his allies.

The younger Mr. Obiang, 41, is known for his extravagant living and his taste for women, yachts and expensive cars. The magazine Paris Match recently described him as a “frustrated singer” who several years ago founded TNO Entertainment, a hip-hop label derived from his initials. He once recorded an album under the name Teddy Bear.

Emmanuel Marsigny, the younger Mr. Obiang’s lawyer, rejects the charges brought against Mr. Obiang. “He earned money in accordance with the laws of Equatorial Guinea,” Mr. Marsigny said, “even if those don’t comply with international standards.”

An effort to annul the seizure of Mr. Obiang’s Paris belongings because of his recently acquired official titles was rejected by a French court in March.

The younger Mr. Obiang is also facing civil forfeiture complaints in the United States. “While his people struggled, he lived the high life, purchasing a Gulfstream jet, a Malibu mansion and nearly $2 million in Michael Jackson memorabilia,” Lanny A. Breuer, an assistant attorney general, said in a statement in October. In June, the Justice Department said that the younger Mr. Obiang had spent $315 million on properties and luxury goods from 2004 to 2011.

Mr. Marsigny said that the French investigation against the Obiang clan was an attempt to “misuse the existing legal framework” and that the economic picture in Equatorial Guinea had brightened, with the country now enjoying “double-digit growth.”

Mr. Bourdon of Sherpa said the investigation in France against the three presidents had recently led to police searches of Mr. Bongo’s and Mr. Sassou-Nguesso’s French properties. The newspaper Libération reported that Mr. Bongo had 33 properties in Paris, 70 French bank accounts and 9 luxury cars worth nearly $2 million, and that Mr. Sassou-Nguesso had 16 French properties and 111 bank accounts.

France, which retains significant military and economic interests in its former African colonies, has long been a haven for corrupt African heads of state, who in the past have been an important source of campaign financing.

The current investigation, Mr. Bourdon said, is a result of France’s recent effort to break with the traditional system, often referred to as Françafrique.

France’s newly elected president, François Hollande, said last year in a campaign speech that France would “repudiate” the “toxic air” of Françafrique, which Nicolas Sarkozy, the president at the time, had said he would also do. In an interview this year with the French diplomatic review Politique Internationale, Mr. Sarkozy called for a “balanced, uninhibited and transparent” relationship with Africa. But there have also been persistent reports of continued illegal financing of campaigns by African states and rulers, all of them denied.

The seizure of Mr. Obiang’s property this month is a major blow, Mr. Bourdon said, against “a culture of impunity that we thought would last forever.”

South Africa Crowns a Black ‘Idol’for the first time EVER, despite the country being 80% black

Man 'high on PCP' falls out of car, is run over and then tries to abduct baby of couple that stopped to help him