This was despite Shimon Peres specifically arriving in the country to work towards a Middle East peace agreement between Arabs and Jews.

The alleged discrimination took place when Mr Peres arrived at the Gare du Nord in Paris, the hub for high-speed trains travelling to cities including London, on March 8. 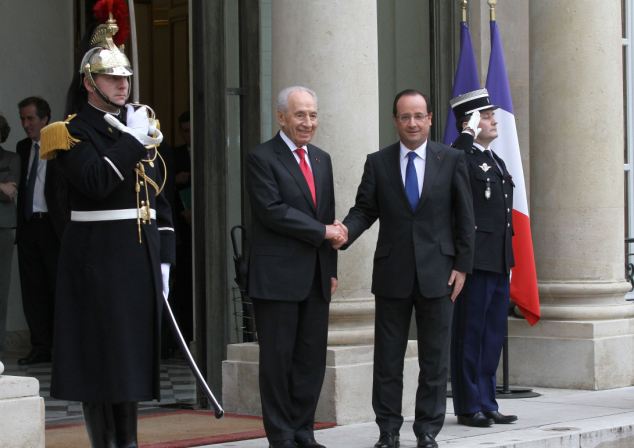 French President Francois Hollande receives President of Israel Shimon Peres at Elysee Palace. It was on this trip that black and African rail workers were banned for the arrival of Mr Peres at Gare du Nord station in Paris because they might have been mistaken for Muslims

It is now the subject of an official complaint by the SUD-Rail transport union which says everything was done to ensure there were ‘no Muslim employees to welcome the Head of the State of Israel’.

Mr Peres and a delegation of other senior Israelis arrived on a morning train from Belgium, and were greeted by staff from SNCF, France’s national railway, and their baggage-handling subsidiary, ITIREMIA.
But the day before, a site manager told all workers at the station about the ban on black staff, and those of North African descent, because they might be Muslim. 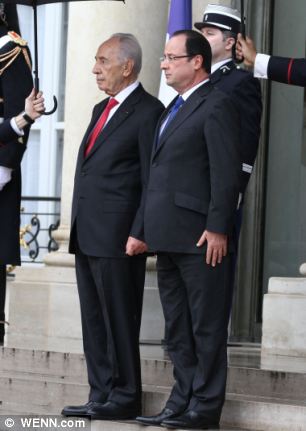 Secular France does not officially recognise anybody’s religion, but it was assumed by management that anyone from a ‘black or Arab’ background might be Muslim – an assumption ‘based on the appearance of the workers’, according to a SUD-Rail statement.
The SUD-Rail statement adds: ‘We insist that SNCF publicly condemns these practices’ as ‘unacceptable’.
Gare du Nord has a large number of workers from an ethnic minority in its workforce, many of whom live in the suburbs of Paris.

SNCF initially blamed the discrimination on ‘security protocol’ advised by the French Interior Ministry and the Israeli Embassy in Paris, but this has been emphatically denied by both.
Instead, the order came from SNCF management, with a spokesman for the state-run company pledging ‘a full investigation’.

The row is particularly embarrassing for SNCF because of the part it played in the extermination of Jews, and other minorities, during the Second World War.
In 2011 the organisation made its first formal public apology to Holocaust victims, many of whom had been entrained to death camps in Germany on lines which ran out of the Gare du Nord.

Francois Hollande, France’s Socialist President, has pledged to clamp down on discrimination against minorities, and particularly Muslims, but prejudice is still rife.
France has the largest Muslim population in western Europe, with up to six million living in the country, many in major cities like Paris.
Read more: http://www.dailymail.co.uk/news/article-2308935/French-rail-firm-BAN-black-African-workers-station-arrival-Israeli-President-mistaken-Muslims.html#ixzz2QSbbXttS