Frank Warren insists ‘the show will go on’ but David Haye and Dereck Chisora could find themselves boxing on an unlicensed promotion at Upton Park on July 14.

The Luxembourg Federation, who have sanctioned the event despite opposition from the British Boxing Board of Control, were suspended by the European Boxing Union at the weekend.

They have also been warned that unless they withdraw from licensing Haye-Chisora, the suspension will become expulsion from the moment the first bell rings. 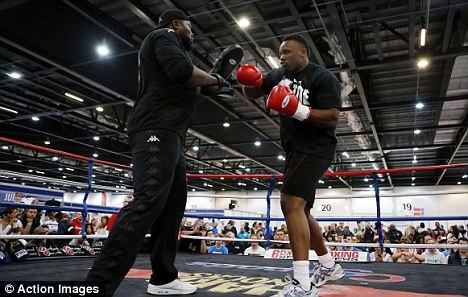 On track: Dereck Chisora took part in a public workout ahead of the fight

That would leave Warren, Chisora’s promoter, either seeking approval from an alternative body or pressing ahead on his BoxNation television channel, regardless.

The British board have refused to sanction the fight, since neither Haye nor Chisora are licensed in this country, and general secretary Robert Smith said: ‘Anyone taking part in an unlicensed promotion — be they boxers, organisers or officials — will be summoned before us. Obviously a ban would be among the punishment options.’ 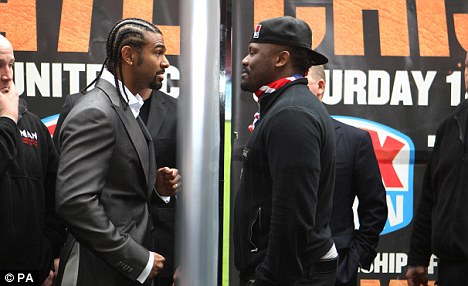 Warren issued a statement interpreting as a humiliating climbdown this shift from the Board’s original declaration that anyone involved at West Ham’s football ground that evening would be deemed to have surrendered their license.

He is also vowing legal action to defend himself and his associates, the boxers included, from any repercussions.

Smith, who attended the EBU meeting in Belgium, responds: ‘We are simply giving anyone who may be involved their proper right to a hearing — under our regulations.’ 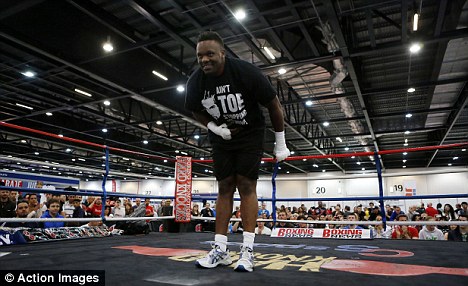 Take a bow: Chisora performed to a packed crowd as he looks to get in shape

Controversy has been festering since Warren announced that Haye and Chisora — the former world title-fighting heavyweights who were involved in that disgraceful brawl at a press conference in Munich — would be settling their grudge in a ring in East London.

Warren who announced on Sunday that 28,000 tickets have already been sold from a capacity of 42,000, is pressing ahead next month, while indemnifying the participants.