Growing up in the 1970s at opposite ends of New York State, two girls were immersed in all things cool, black and funky.

Saturday morning cartoons won their hearts. Loreen Williamson, in Rochester, and Pamela Thomas, in the Bronx, would park themselves in front of the “The Jackson 5ive,” featuring a tiny Michael sporting a big Afro, and “Josie and the Pussycats,” with the black tambourine-playing Valerie Brown performing in a hip girl band.

Eventually, the two met and bonded over their mutual interests. Not content to leave the funk (or their pasts) behind, Ms. Williamson, now 49, and Ms. Thomas, 51, have amassed more than 300 pieces of black animation art from the 1960s and ’70s, a collection that they believe is one of the world’s most extensive in that field. In 2007, they created theMuseum of UnCut Funk, an online showcase for original animation cels, posters, storyboards and other objects celebrating black culture of the 1970s and its standard-bearers. Now, the two collectors have hit the road with a traveling museum exhibition, “Funky Turns 40: Black Character Revolution,” which represents 24 animated productions, including Saturday morning and after-school cartoons and animated feature films.

The revolution that it documents is from stereotype to superhero: “Funky,” which is currently at the Schomburg Center for Research in Black Culture in Harlem and will travel to museums in Chicago, Seattle and West Reading, Pa.honors the cartoons’ image-affirming black characters, including those of “The Harlem Globetrotters,” “Kid Power,” “Schoolhouse Rock” and “Fat Albert and the Cosby Kids.”

The programs are more than entertaining nostalgia, the two curators and some cultural historians say. They represent the fruits of a struggle for a say in the representation of blacks in television images, among other rights, and the newfound ability of popular black entertainers to get such programming on the air, based on their own appeal to a wide audience.

The shows offered a striking counterpoint to the previous stereotypical portrayals of blacks as buffoons in mainstream films, books, theater, advertising and cartoons. “It shows a time in American history when art and diversity and civil rights aspirations all came together,” said Christopher P. Lehman, a professor of ethnic studies at St. Cloud State University in Minnesota and the author of “The Colored Cartoon: Black Representation in American Animated Short Films, 1907-1954” (University of Massachusetts Press).  “Before 1970, African-Americans were not much on television at all, except as the domestic servants of Jack Benny and Danny Thomas or as guests on variety series.” 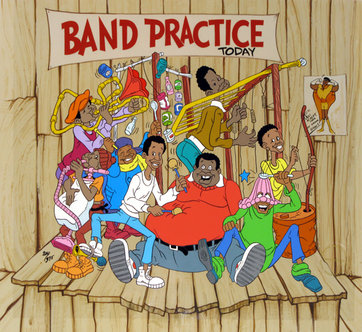 “Fat Albert and the Cosby Kids” is among the animated series highlighted in a new traveling exhibition at the Schomburg Center for Black Culture.CreditCollection of Museum of UnCut Funk

It was no accident that “Hey, Hey, Hey, It’s Fat Albert,” described by curators as the first “positive” black-cast cartoon on TV (and the basis of the later series), was an NBC prime-time special in 1969, or, in the same vein, “The Jackson 5ive,” the first Saturday morning cartoon series featuring black musicians, made its debut in 1971. Both were created by two entertainment powerhouses, Bill Cosby (Fat Albert and the gang were part of his stand-up comedy routine) and Berry Gordy Jr., the founder of Motown Records, who marketed the family music act to appeal to the broadest possible audience.

Recalling her generation’s response, Ms. Williamson, who works as an independent consultant for marketing and business, said, “We got to see Martin Luther King’s dream, at least in cartoon form.”

“There was a lot of cross-pollination with what was going on in black culture,” she said. “You could watch the cartoons, go to the concerts, see the stars on variety shows. And our

white friends were watching, too.” Ms. Thomas, a preschool teacher, said: “It made me feel like, wow, I see myself on TV. I started feeling good about myself.”

She and Ms. Williamson are also avid collectors of blaxploitation film posters and of comic books, stamps and coins with an African-American flavor. The women, who met in 1997, founded an art and animation gallery that they ran as partners from 2000 to 2003 in Summit, N.J. They also sought to bring their art and their historical perspective to the attention of museums. But black history exhibitions typically focused on the most tumultuous aspects of the civil rights struggle, and animation is a far more accepted museum subject in Europe and Asia than in this country.

Eventually, Ms. Thomas and Ms. Williamson convinced curators that the Saturday morning children’s cartoons reflected an important but overlooked positive moment in cultural and social history. “At the same time, everybody had a big Afro, and they were saying black is beautiful. You began to see that in TV and film, and you also had this revolution in black animated characters,” Ms. Williamson said.

While some of the children who watched the cartoons may have looked like and identified with the characters, some parents did not applaud the stories, feeling that like many of that cartoon era, they were not particularly educational. And some critics noted how carefully calibrated the characters were to avoid offending anyone.

Jerry Beck, a historian of animation, said that writers created “a vague persona for the characters,” and “then they painted them black.”

“There weren’t any breakout black characters,” he said. “But they were there, and they hadn’t been there before, and that’s important.”

The Fat Albert gang did manage to take on some hard-hitting issues like crime, prison and drug use, said Joseph Wos, executive director of theToonSeum in Pittsburgh, which presented a smaller version of “Funky Turns 40” in 2012. Black animation “reflects the same time line as acceptance of African-Americans in society,” he said. “A lot of people were resistant to it, because it was going to introduce children to a more open society.”

Around the same time, he noted, Peter Jones was introduced as a black character in the Hardy Boys cartoon series. That may have been even more significant than the Globetrotters cartoons, he said, “‘because Peter might live next door.”

Mr. Wos praised the “Funky” exhibition but suggested that it might benefit from a timeline to help visitors understand what was happening in the real world of race relations and how children and their families felt about what they saw on television.

Yet  “Funky” was not intended to bear the weight of a historical survey, Ms. Williamson and Ms. Thomas point out. Christopher P. Moore, a senior researcher at the Schomburg, describes it rather as a “visual continuation of the civil rights movement.”

“It is history that not enough people know,” he added.

That may change as “Funky” continues to draw visitors, from groups of schoolchildren to those much older. Ms. Thomas and Ms. Williamson say they are hoping the exhibition will stir lively intergenerational discussion in New York and elsewhere.

“Our families think we are crazy for all the money we spend collecting all this stuff,” Ms. Thomas said. “But we always knew this had value that went way beyond dollars.”

Haiti: Where Did the Money Go?