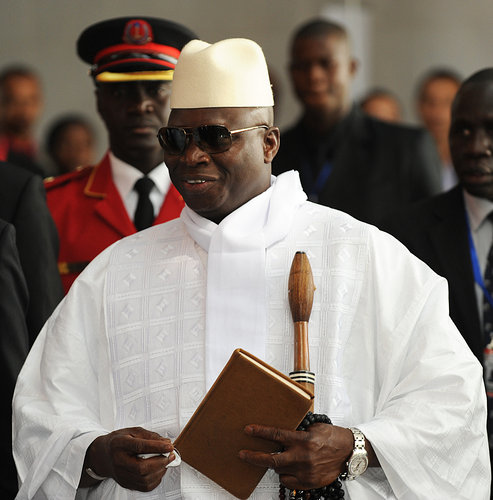 President Yahya Jammeh has a record of human rights abuses.

DAKAR, Senegal — The eccentric president of Gambia has warned that he will carry out a mass execution of prisoners by mid-September, a threat local journalists and opposition officials said must be taken seriously given his unpredictability and long record of human rights abuses.

President Yahya Jammeh, a former wrestler and army colonel who seized power in the tiny nation 18 years ago, said in a widely reported speech this week that “by the middle of next month, all the death sentences would have been carried out to the letter.”Amnesty International says 47 people are on death row, including a number of former government officials convicted of “treason” for supposedly plotting to overthrow Mr. Jammeh’s government. The death sentence in Gambia is usually carried out by hanging.

Amnesty said nine prisoners had already been taken from their cells and executed, according to “credible reports” it said it had received. The organization said that the nine were executed Thursday night, and that three of them had previously been convicted of treason.

The editor of the leading opposition newspaper, Foroyaa — himself a regular target of government persecution — said he could not yet confirm the executions late on Friday. “What is clear is that nine people were removed from where they were” on death row, said the editor, Sam Sarr. “We do not yet know what happened to them.”

Amnesty regularly denounces Mr. Jammeh’s government for systematic use of torture at the country’s notorious Mile 2 Central Prison, enforced disappearances, the frequent arrests of journalists and opposition politicians, and the regular shutting down of critical news media. Gambia, an English-speaking enclave smaller than Maryland in the middle of Francophone West Africa, is considered one of the most repressive countries on the continent. Its long white-sand beaches are nonetheless a favorite of Northern European vacationers, and the country depends heavily on tourism.

For the country’s embattled longtime opposition leader, Halifa Sallah, Mr. Jammeh’s motivation in announcing the executions was clear. “It frightens people,” Mr. Sallah said. “It makes people be careful. People live in a state of uncertainty. Everybody gets worried.”

Mr. Jammeh has made himself notorious for pronouncements like a threat to behead gay people, who are subjected to systematic persecution. He claims he can cure AIDS and has staged elaborate would-be AIDS-curing ceremonies with himself, dressed in flowing white robes, at the center. Three years ago he rounded up numerous citizens he accused of witchcraft, sometimes with lethal consequences.

Most recently, Mr. Jammeh claimed to have won re-election in November to a fourth term with 72 percent of the vote, in an election boycotted as thoroughly unfair even by the normally indulgent observer mission of the regional grouping of West African nations known as Ecowas.

Mr. Jammeh often arrests or dismisses leading officials in his country of 1.8 million, a sliver of land wedged into Senegal, leading to what journalists, opposition officials and human rights groups say is a permanent atmosphere of paranoia in government circles. Last year, the former army and intelligence chiefs were sentenced to death on treason charges. The former minister of information and communication was also charged with treason, accused of printing and distributing T-shirts with the slogan “End to Dictatorship Now.”

Mr. Jammeh’s eccentricity has made him something of a headache for other leaders in the region, who regularly make the trip to the diminutive capital, Banjul, in attempts to talk him down.

Such was the case this week when the African Union sent Benin’s foreign minister to try to persuade the Gambian leader not to make good on his executions threat. But the trip may have been too late.

Journalists in Banjul — who bear the brunt of Mr. Jammeh’s repression, and are frequently arrested and tortured themselves — think the president is serious.

“From my observation, I think he’s serious about it,” said Madi Ceesay, publisher of The Daily News. “His expression was of someone very upset,” said Mr. Ceesay, who noted that Mr. Jammeh’s speech had referred to two murder cases in which husbands killed wives. “He said these kinds of killings must stop. Really, I’m not taking it for granted. I’m worried he’ll carry this thing out.”

In his speech, which was televised in Gambia, Mr. Jammeh was quoted as saying, “There is no way my government will allow 99 percent of the population to be held to ransom by criminals.”

Amnesty said that in addition to the nine who may already have been executed, “more are under threat of imminent executions today and in the coming days.”

Mr. Sarr, the Foroyaa editor, also believes Mr. Jammeh means business. “If you judge by his countenance, that showed he meant it,” Mr. Sarr said.