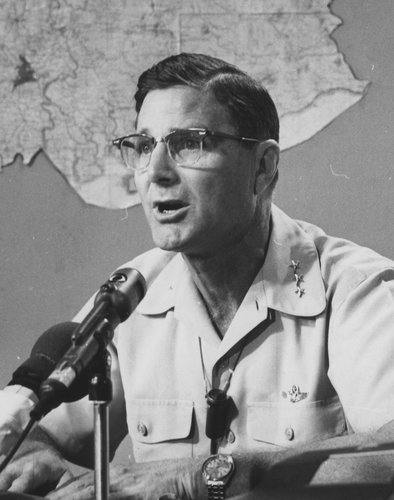 Gen. William W. Momyer, a celebrated World War II fighter pilot who helped plot postwar tactics for the Air Force and commanded aerial combat and bombing operations during the early years of the Vietnam War, died Aug. 10 at an assisted-living center in Merritt Island, Fla. He was 95.

The general, a resident of Rockledge, Fla., in recent years, apparently died of heart failure at Selah Seniorcare-Cedar Creek. Chloe Drobniewski, a spokeswoman for the center, confirmed his death on Sunday.

In a 35-year career that spanned a revolutionary era of aerial warfare, from dogfights in P-40s against whining Messerschmitts over North Africa to the rolling thunder of supersonic fighter-bombers over the cities and jungles of Southeast Asia, General Momyer (pronounced MOE-meyer) was known as a daring pilot, an aggressive wing commander and one of the best air tacticians of his time.

In combat missions over Algeria, Tunisia, Sicily and Italy during World War II, General Momyer, then the young commander of the 33rd Fighter Group, led attacks on enemy troops, installations, airfields and convoys; shot down eight fighters, including four confirmed kills in a single engagement; became a highly decorated ace; and, by 1943, after little more than a year of combat, was wearing the silver eagles of a full colonel.

But his group’s combat losses were heavy, and his record was tarnished by verbal attacks — amplified by a Time magazine article — on an all-black squadron under his command that came to be known as the Tuskegee Airmen. He disparaged its discipline and performance and hinted at cowardice, although he had excluded its men from briefings and had grounded them far from the front.

A Congressional committee found his accusations to be baseless, and the black airmen went on to a distinguished war record.

In 1944, Colonel Momyer, whose nickname was “Spike,” was ordered home and named chief of combined operations for the Army Air Forces, coordinating air and ground combat tactics. After the war, he became assistant chief of staff for the new Air Force Tactical Air Command, which was set up to reorganize the nation’s air defenses and its tactical and reserve forces. During the Korean War, he remained stateside, joining the faculty of the Air War College.

After a series of operational commands in postwar Korea and in the United States, and assignments in Air Force planning and programs that propelled him up the ranks, General Momyer, now with three stars, was sent to Vietnam in 1966 as commander of the Seventh Air Force and deputy commander for air operations under Gen. William C. Westmoreland, the United States commander in Vietnam.

General Momyer ran the air war in Indochina, coordinating Air Force, Marine and South Vietnamese operations and some Navy sorties in the Gulf of Tonkin by carrier-based jets in the South China Sea. His forces included F-4 Phantoms and F-105 Thunderchiefs, supersonic fighter-bombers armed with missiles that looped and dived in wide-ranging air battles against Soviet-made MIGs deployed by North Vietnam. By late 1967, his forces had largely eliminated the MIG threat and ruled the skies.

In support of American and South Vietnamese paratroops and ground forces, General Momyer’s planes dropped bombs and napalm to clear landing zones and attacked targets in dense jungles that were bastions of concealment for the Vietcong and North Vietnamese forces.

During the Tet offensive in 1968, when North Vietnamese forces attacked South Vietnam’s cities and military bases, General Momyer’s high-flying B-52 Stratofortresses pounded enemy troops at Khe Sanh with 100,000 tons of explosives. The operation, dubbed Niagara, inflicted heavy losses on the North Vietnamese, who eventually broke off the attack.

But some air bases, the Haiphong docks and a rail center on the Chinese border were off limits, despite recommendations by General Momyer and others to hit them. Worried about widening the war, President Lyndon B. Johnson and Defense Secretary Robert S. McNamara mandated a strategy of slowly escalating air attacks, but eventually allowed strikes at all but a few targets.

General Momyer’s work was hailed by Johnson, who in December 1967 made him a four-star general, met him in Thailand and asked him to extend his tour of duty for six months. He personally flew dozens of missions, including reconnaissance and rescue operations, but plotted the air war in a windowless headquarters near Saigon, surrounded by intelligence photos, maps and weather reports.

Colleagues said he knew the topography, the roads and the trail networks thoroughly; charted all missions, enemy encounters and weather patterns in grease pencil on glass-covered seven-foot maps; could contact any pilot in Southeast Asia within one minute; and tenaciously pursued search-and-rescue missions for downed pilots, sometimes pacing all night in his combat center awaiting word. His pilots said he had an uncanny insight into flight patterns to avoid flak on missions in the North.

The general left Vietnam in August 1968 and assumed command of the Tactical Air Command, which developed tactical strike forces for deployment anywhere in the world. He retired in 1973, having amassed 4,000 hours in the air and a host of decorations.

William Wallace Momyer Jr. was born on Sept. 23, 1916, in Muskogee, Okla., one of four children of William Sr. and Beatrice Conway Momyer. His father died when he was a boy, and the family moved to Seattle, where he attended Broadway High School. He earned a bachelor of arts degree at the University of Washington in 1937 and entered military service in 1938.

In 1939, he married Marguerite Willson, who died in 2004. He is survived by a daughter, Billie Jean Pilipovich of Merritt Island, and by three grandchildren and three great-grandchildren.

He trained as a fighter pilot and was assigned to flight command duties until 1941, when he went to Cairo as a military attaché. In Egypt he became an adviser to the Royal Air Force, which was acquiring its first squadron of Curtiss P-40s for the coming air war in North Africa. From 1942 to 1944, he led the American 33rd Fighter Group in North Africa and Italy.

General Momyer was the author of “Air Power in Three Wars,” covering World War II, Korea and Vietnam. General John P. McConnell, the Air Force chief of staff during General Momyer’s Vietnam years, said: “He is the greatest tactical air technician and knows more about the operations of tactical air forces than anyone the Air Force has ever produced.”

Unchained Memories: stories of former slaves interviewed during the 1930s as part of the Federal Writers' Project.

William Thomas, who sought to preserve a historical black church in Lexington, dies