The theory that modern humans came from one place in Africa has been challenged by new research.

A study showed the Khoe and San peoples of the sub-Sahara are descendents of the earliest diversification event in the history of all humans, some 100,000 years ago.

The findings, involving 220 participants representing 11 populations across southern Africa , revealed around 2.3 million DNA variants per individual, according to the journal Science 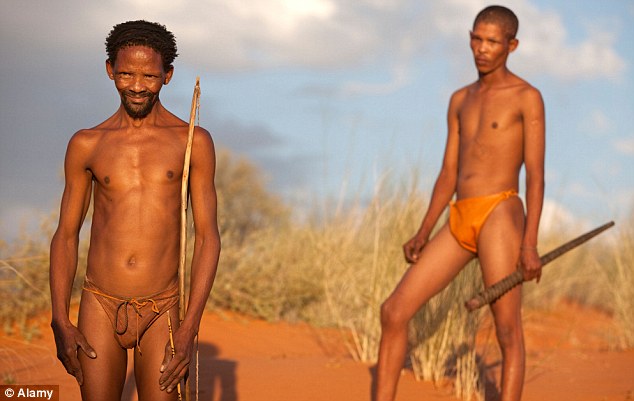 This was thought to be due to interbreeding and genetic stratification – non-random mating between groups.

A group of international scientists from Sweden and South Africa conducted the largest genomic study ever among the click-speaking Khoe and San groups.

Researchers estimate that the San populations from northern Namibia and Angola separated from the Khoe and San populations living in South Africa as early as 25,000 — 40,000 years ago.

Dr Carina Schlebusch, of  Witwatersrand University in Johannesburg, told Science: ‘There is astonishing ethnic diversity among the Khoe-San group. 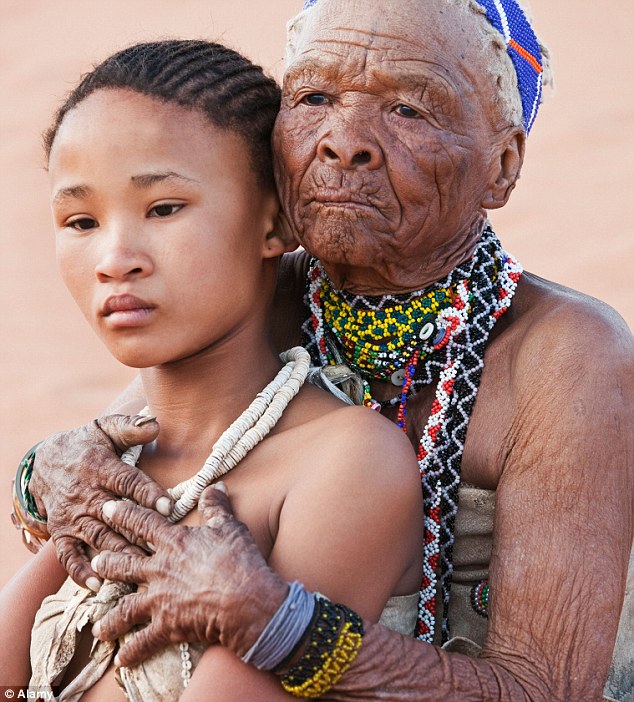 Tribe: A young girl and an old woman of the San people

‘We were able to see many aspects of the colorful history that gave rise to this diversity in their DNA.’

Many scientists believe modern humans originated from one region in Africa before spreading into Europe and Asia about 60,000 years ago.

Others theorise there were several ‘movements’ out of Africa.

‘It is possible that modern humans emerged from a non-homogeneous group,’ said Mattias Jakobsson from Sweden’s Uppsala University, one of the authors.

The genetic data also showed how generations of Khoe-San adapted to their environment which involved muscle function, immune response, and UV-light protection.

Farming skills developed and spread across southern Africa with genetic contributions between a southern San group and people in east Africa.

The Science journal reported how researchers focused on signals across the genome of ancient adaptations that happened before the historical separation of the Khoe-San lineage from other humans.

Co-author Pontus Skoglund, from Uppsala, said: ‘Although all humans today carry similar variants in these genes, the early divergence between Khoe-San and other human groups allowed us to zoom-in on genes that have been fast-evolving in the ancestors of all of us living on the planet today.’

The study is to be made freely available for future disease-related studies.