By VICTORIA WOOLLASTON
PUBLISHED: 10:56 EST, 7 May 2013 | UPDATED: 11:42 EST, 7 May 2013
Rocks discovered off the coast of Rio in Brazil could be part of a hidden continent, according to geologists.
The granite samples were found when Brazil’s Geology Service (CPRM) dredged the seabed near the Rio Grande Elevation – a long seismic mountainous ridge that runs along the bottom of the Atlantic Ocean.
And now scientists claim the rocks were likely part of a continent that sunk into the ocean when Africa and South America drifted apart 100 million years ago – dubbing the discovery the ‘Brazilian Atlantis’. 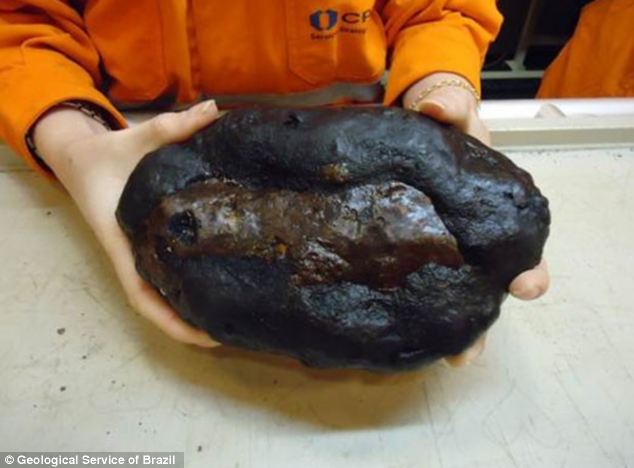 A CPRM member showing one of the rocks from the deep-sea during dredging works, 900 miles off the shore of Rio de Janeiro. According to the CPRM director, Roberto Ventura Santos, the rocks would be part of the former continent submerged when the Atlantic Ocean rose up from the separation of now Africa and South America 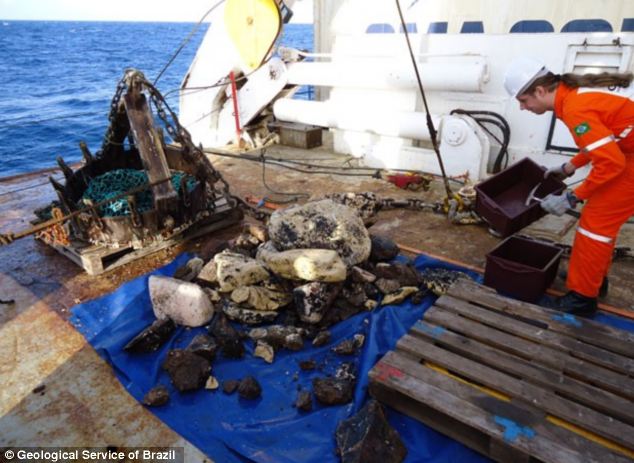 Brazil’s Geology Service dredged the seabed off the coast of Rio, near the Rio Grande Elevation. Among the rocks found were granite samples that are thought to be part of a continent that was submerged by the Atlantic Ocean when Africa and South America split 100 million years ago 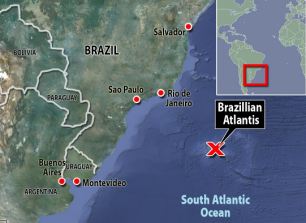 The location of the ‘Brazilian Atlantis’. Granite samples were found 900 miles from Rio, near the Rio Grande Elevation – a mountainous rock formation along the floor of the Atlantic Ocean

Brazil’s Geology Service (CPRM) dredged the seabed by the Rio Grande Elevation almost two years ago so it could analyse the rocks buried there.
A number of granite rocks were among the samples found 900 miles (about 1,500 kilometres) from Rio.
Roberto Ventura Santos, a top official at Brazil’s Geology Service (CPRM), told the G1 website: ‘This could be the Brazilian Atlantis.
‘We are almost certain but we must bolster our hypothesis.
‘We will have final (scientific) recognition this year when we conduct drilling in the area to retrieve more samples of these rocks.’
Last month a team of scientists from Brazil and Japan took a research submersible called the Shinkai 6500 underwater to study the Rio Grande Elevation.
Ventura added that what they saw back up his claims about the ‘Brazilian Atlantis’: ‘We began to see that the area could be a piece of the continent that disappeared into the sea millions of years ago.’
More tests are being carried out on the rocks found, and on the underwater geological formation, to confirm the geologists claims.

WHAT AND WHERE IS THE CITY OF ATLANTIS?

Atlantis is Greek for the ‘island of Atlas’.

It is a legendary island that was first mentioned by Plato in his work on Timaeus and Critias.

The first reference to the island dates back to about 360 BC.

Plato claims that Atlantis was similar to a Naval army that conquered parts of Western Europe and Africa in around 9600 BC.

The island was said to have sunk into the ocean after a failed attempt to invade Athens, Greece.

In 2011, Professor Richard Freund from the University of Hartford claimed to have found evidence of Atlantis in southwestern Andalusia.