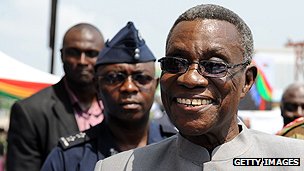 Ghana’s President John Atta Mills, who was suffering from throat cancer, has died in hospital in the capital, Accra.

A statement from his office said the 68-year-old died a few hours after being taken ill, but did not give details.

“It is with a heavy heart… that we announce the sudden and untimely death of the president of the Republic of Ghana,” the statement said.

Mr Atta Mills had ruled the West African country since 2009.

The BBC’s Sammy Darko, who is at the military hospital in Accra, says Mr Atta Mills’ voice has been degenerating in the last few months.

According to a presidential aide, the leader had complained of pains on Monday evening and died on Tuesday afternoon.

This is the first time that a president has died while in office in Ghana. In a country hailed as a solid democracy, John Atta Mills’ sudden death should not spark a political crisis but will certainly test the country’s democratic institutions. As Vice-President John Dramani Mahama steps in as interim head of state, the question people are asking in the Ghanaian capital Accra is: “Who is going to run for president with the ruling party in December?”

Mr Atta Mills had just been nominated by the National Democratic Congress to stand for a second term. But his nomination had illustrated a split within the ruling party with Nana Konadu Agyemang-Rawlings, the wife of former ruler Jerry Rawlings, who leads a faction critical of Atta Mills’ management. Mr Atta Mills’ health has always been a subject of great debate in Ghana, even before he took office in 2009. But his illness was never officially declared and Mr Atta Mills himself insisted he was doing well.

He had recently returned to Ghana after visiting the US for medical checks, the news agency says.

Vice-President John Dramani Mahama will be sworn in as president at 2000 GMT, in line with Ghana’s constitution.

Journalist Elizabeth Ohene, a former BBC editor and member of Ghana’s former government, said she had not believed the news at first, as there had been many false reports about his death.

“For the past three or four years there’s been news he’s been unwell and rumours of his death – twice – and he appeared with grim humour to say they were exaggerated, insisting he was well,” she told the BBC’s Focus on Africa programme.

He came to power after narrowly winning against a candidate from the then governing New Patriotic Party, Nana Akufo-Addo, in polls in December 2008.

His predecessor, John Kufuor, stepped down after having served the maximum permitted two four-year terms.

It was Mr Atta Mills’ third attempt to win the presidency, after defeat in 2000 and 2004 to Mr Kufuor.

Under Mr Atta Mills’ leadership, Ghana joined the ranks of the world’s large-scale oil producers. He was to run for a second term in December.

Our reporter says the NPP’s presidential candidate, Nana Akufo-Addo, has cut short his election campaign in the west of Ghana.

He is expected to express his formal condolences when he reaches the nearest town.