Archaeologists have uncovered a mysterious giant statue of an Egyptian princess guarding a temple.

They say the 6.5ft tall alabaster figure of a pharoanic princess is part of a huge 465 feet tall statue.

Dating from approximately 1350 B.C, the mysterious giant was found outside the southern city of Luxor. 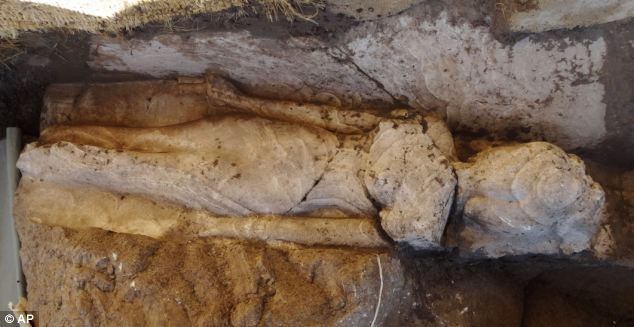 The giant statue of King Amenhotep III’s daughter dating from approximately 1350 B.C., outside the southern city of Luxor.

Amenhotep III reigned from c1390 – 1352 BC, when Egypt had become the richest and most powerful nation on earth through war and conquest.

Countries like Babylonia, Assyria, and Mitani were emerging as potential new rivals, and Amenhotep began writing to the other rulers of the Near East, carving letters on small stones that messengers took to foreign princes.

The Amarna letters, as they became known after they were found in 1887, were the key to Amenhotep’s success, especially when backed up with gifts from Egypt’s great wealth.

In the southern part of his kingdom, Amenhotep and wife Tiy were worshipped as gods.

Amenhotep’s new temples were also dedicated to Egypt’s many gods, particularly Amen-Re, the king of the gods.

The Egyptian Minister of Antiquities Mohammed Ibrahim said the statue was once part of a larger statue that was nearly 14 meters (456 feet) tall and guarded the entrance to a temple.

Ibrahim says the statue is of Iset, the daughter of Amenhotep III, and is the first found that depicts her without her siblings.

Archaeologists uncovered the statue next to the funerary temple of Amenhotep III, who was worshipped as a deity after his death.

The 6 ½-foot-tall alabaster statue of a pharoanic princess, dates from approximately 1350 B.C., and was found outside the southern city of Luxor.

‘The statue is part of a 14-metre-high (46-foot) alabaster sculpture of Amenhotep III that was at the entrance of the temple sanctuary,’ team head Dr Hourig Sourouzian said.

The sculpture features the 18th Dynasty ruler on his throne, his hands on his knees, his daughter standing between his legs, wearing a wig and a long tunic and holding a neckless in her right hand. 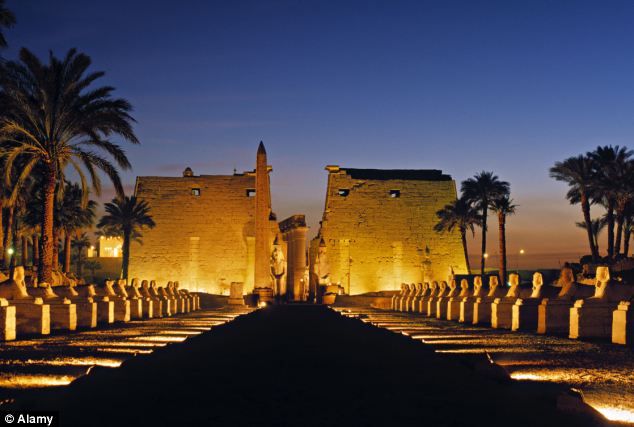 Avenue of Sphinxes, Luxor Temple. The new statue was found outside the southern city of Luxor

It is the first time a sculpture has been found that depicts the princess alone with her father: others show her with her two parents and her brothers, Sourouzian said.

The statue of the princess ‘was eroded, especially the face’, and the feet were missing, ministry official Ali El-Asfar said.

The princess’s name and her titles, among them ‘Love of her father’, were carved on the statue, Asfar added.

Luxor, a city of some 500,000 people on the banks of the Nile in southern Egypt, is an open-air museum of intricate temples and pharaonic tombs.

Ancient Egyptian symbols discovered in America in the state of Oklahoma