A ‘deranged’ grandson beat his grandmother to death with a fake elephant tusk today because he believed she had entranced him with a voodoo spell, it has been claimed.
Dominick Anderson, 26, allegedly flew into a violent rage at Beverly Holmes’ New York apartment, after he found a doll and pictures of himself in her closet while doing the Christmas cleaning.
Anderson’s mother, Mary Anderson, told reporters her son had ‘psychiatric problems’ and the discovery made him think Mrs Holmes was performing black magic on him behind his back.
‘That’s where she goes and does her chanting every morning,’ she told The New York Post. ‘Dominick took that doll and threw it away. He said, “I can’t believe my own family is trying to do this to me.”‘
Officers were called to the home, in Hamilton Heights, Harlem, after reports of a domestic disturbance to find Anderson brawling with the 62-year-old pensioner and his sister, according to reports.
But when they tried to break the pair up, Anderson turned on the officers wielding an ornamental plastic tusk, it is claimed.
He reportedly brought the trinket down on the head of officer Michiell Matos before swinging it at five others as they tried to intervene.
It took all five officers and a blast of pepper spray to subdue Anderson, before he was taken away in restraints.
The injured officer was rushed to Harlem Hospital with a serious head wound while his five colleagues were treated for minor cuts and bruises. 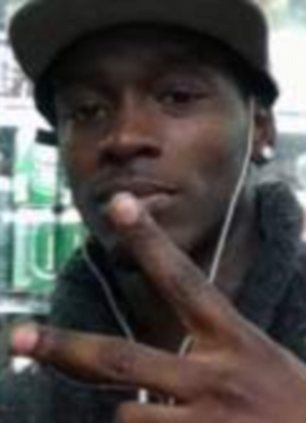 Arrested: Dominick Anderson, 26, allegedly flew into a violent rage at Beverly Holmes’ New York apartment, after he found a doll and pictures of himself in her closet while doing the Christmas cleaning

Mrs Holmes was rushed to hospital with stab wound to the head, the New York Fire Department said, but medics were unable to save her.
Mrs Anderson told the New York Daily News that, in his fury, her son had ripped the tusk from a statue that sat on the mantlepiece in the living room between the radiator and a picture of Elijah Muhammad, the late leader of the Nation of Islam. She said it was a replica Mrs Holmes had bought at Bloomingdale’s. 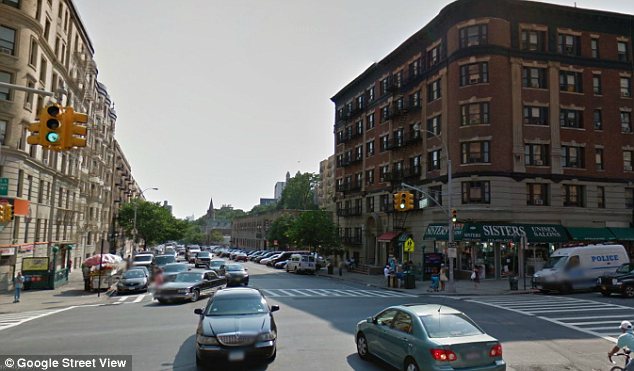 Scene: The incident occurred inside a building on St. Nicholas Avenue and West 145th Street at 8.10am on Wednesday, police said

The newspaper reported that a television was also smashed, curtains ripped down and a table was broken in the brawl. The blood-stained tusk was also found lying on the living room floor.
The incident occurred inside a building on St. Nicholas Avenue and West 145th Street at 8.10am today, police said.
Anderson’s distraught mother told The Post that her son suffered from psychiatric problems, adding: ‘He thinks my mother is doing the voodoo on him,’ she told reporters. ‘It’s a family tragedy. He’s a good boy.’ 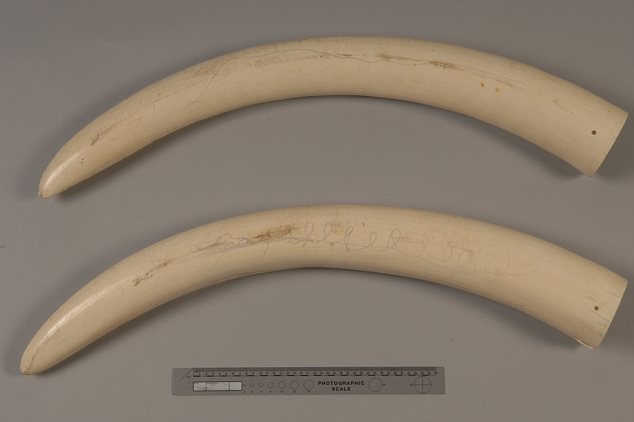 Weapon: Dominick Anderson, 26, allegedly hit the officer on the head with a plastic ornamental elephant’s tusk, similar to these (stock image)

Describing him as a ‘father figure’ in the family, Mrs Anderson said her son had a five-year-old daughter and made a living doing odd jobs around the local community.
She said while her family was Muslim, Mrs Holmes had dabbled with Buddhism.

Officers said the suspect was in a ‘stable condition’ at Harlem Hospital where he will undergo a psychiatric evaluation.
His sister, Simone, 17, was also injured in the attack, suffering a gash to the head. She is understood to be recovering in hospital.

He has been charged with attempted murder and resisting arrest, although police sources told the Post charges could be upgraded following autopsy results.
Read more: http://www.dailymail.co.uk/news/article-2250991/Grandmother-beaten-death-fake-elephant-tusk-deranged-grandson-believed-cast-voodoo-spells-him.html#ixzz2FcVs80Xd