The Greatest Flood in History
In the winter of 1926-27 the rains were so heavy that on the tributaries of the Mississippi the water had overflowed the banks, causing floods to the west in Oklahoma and Kansas, to the east in Illinois and Kentucky.
On Good Friday, April 15, 1927, the Memphis Commercial Appeal warned: “The roaring Mississippi River, bank and levee full from St. Louis to New Orleans, is believed to be on its mightiest rampage…All along the Mississippi considerable fear is felt over the prospects for the greatest flood in history.”
That Good Friday morning, the rains came, setting all-time records for their breadth and intensity. They came down over several hundred thousand square miles, covering much or all of the states of Missouri, Illinois, Arkansas, Mississippi, Texas, and Louisiana.
In New Orleans in 18 hours there were 15 inches of rain—the greatest ever known there. The river swelled so high and flowed so fast that in Berry’s woods, for the residents along the river, ” It was like facing an angry, dark ocean.”
One man recalled, decades later, “I saw a whole tree just disappear, sucked under by the current, then saw it shoot up, it must have been a hundred yards [downstream]. Looked like a missile fired by a submarine.” 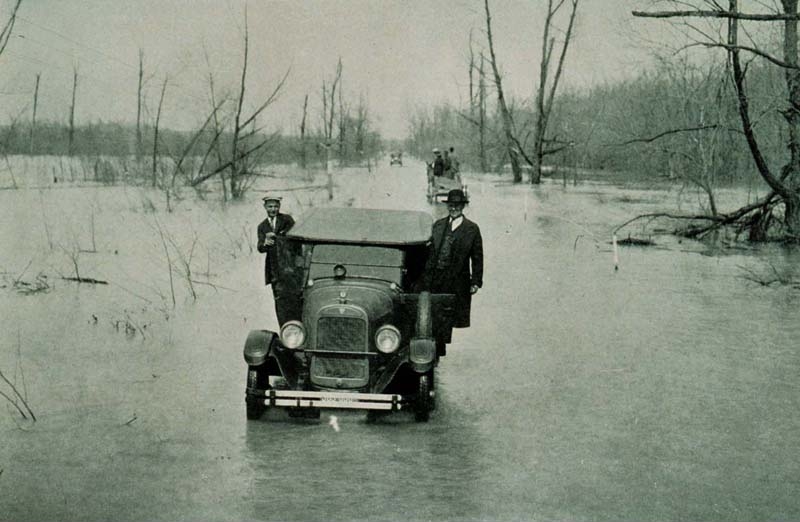 In the spring of 1927, the U.S. Army Corps of Engineers assured the public that the levees would hold. The Corps had built them, after all. But as had been the case at the mouth of the river, the Corps overestimated its own prowress and underestimated the power of the river.
The Corps built the levee system to confine the river. They represented man’s power over nature. If necessary, it was thought, the flow would be reduced with outlets that would divert part of the river into the biggest outlet of all, the Atchafalaya River, into the Gulf, or at Bonnet Carre, just above New Orleans, into Lake Pontchartrain and then to the Gulf.
Neither levees or outlets would work, according to James Buchanan Eads, the man who built the first railroad bridge over the Mississippi, at St. Louis, and the jetties at the river’s mouth (in 1932 Deans of the American Colleges of Engineering named him one of the five greatest engineers of all time, ranking him with, among others, Leonardo DaVinci and Thomas Edison.)
At South Pass, at the mouth of the river, Eads had made the river obey his will. To prevent floods he proposed cut-offs to straighten and speed the river. The increased speed could scour the bed, even during lower water. The concentration of the river’s force would lower the bed so the river would carry more water, faster. By such correction, Eads declared, “floods can be permanently lowered,” which would render levees superfluous.
But no cut-offs were dug. Nor was another idea, to build reservoirs on the tributaries to hold back the water. Nor were any outlets dug. The Corps of Engineers–and then the residents of the Valley–relied on levees only.
At high water the river spread and rose even higher. In turn, the Corps raised the height of the levees, from two feet to 7.5 feet to as much as 38 feet. The Corps was confident that its levees-only system would hold in the river, and it so promised.
The levees failed. Here, there, sometimes it seemed everywhere, the river undercut the levees. Water poured through breaks called crevasses, covering with 30 feet of water land where nearly one million people lived.
Twenty-seven thousand square miles were inundated. This was about equal to the combined size of Massachusetts, Connecticut, New Hampshire, and Vermont. By July 1, even as the flood began to recede, 1.5 million acres were under water. The river was 70 miles wide.
Still the rains came. The river rose higher. Most threatened was the Mississippi Delta, between Memphis and Vicksburg, possibly the richest, most fertile land in the country, perhaps in the world.

“Blacks put in Concentration Camps”
To save the land, frantic efforts to raise the levee by stacking sand bags on the top were begun. Charles Williams was an employee of former Mississippi Senator Le Roy Percy’s on one of the largest cotton plantations in the Delta. He set up “concentration camps” on the levee protecting Greenville, complete with field kitchens and tents, for thousands of plantation workers–all African Americans–to live as the men handled sand bags.
The river, not the men, won the battles. On April 21 it broke through the levees. Major John C. H. Lee, the Army district engineer at Vicksburg (and in World War II in command of the Services of Supply in the European Theater of Operations–there the chief quartermaster and called by the enlisted men, who halted hated him, “Jesus Christ Himself Lee” wired the chief of the Corps of Engineers, General Edwin Jadwin, “Levee broke…crevasse will overflow entire Mississippi Delta.”
The crevasse, just upriver from Greenville was huge, a 100-foot channel half a mile in width. Water poured through, more than double the amount of Niagara Falls, more than the entire upper river ever. In 10 days it covered one million acres with water 10 feet deep–and the crevasse continued to pour water for months.
Panic. Hundreds of workers on the levee climbed into a barge below the break to escape. A tugboat tried to push the vessel downstream, but the flow through the crevasse pulled it upstream. One white man called out “Let’s put all the niggers on the barge and cut it loose.” Another man, Charlie Gibson, interceeded. “We ain’t goin’ to cut the barge loose. I’ll shoot you if you try that. If we go, we go together.”
Senator Percy’s son Will, a World War I hero and a noted poet, took charge of the Red Cross relief efforts for the blacks stuck on the levee. His first impulse was to evacuate them on steamers.
The planters protested. They persuaded Le Roy Percy to instruct his son to leave those blacks on the levee. Cotton was the principal, indeed almost the only crop grown in the Delta. Cotton was labor intensive–it was planted, cultivated, and picked by hand. The planters grew rich because of it. The workers got $1 a day for their sunrise to sunset labor. 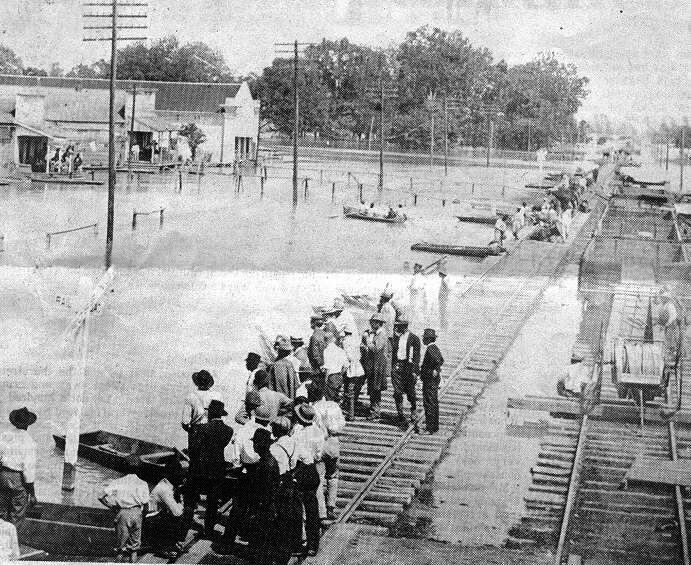 The planters knew that if the blacks got out of the Delta, they would never return. They had nothing to come back to and anyplace was better than the Delta. Keep them here, the planters declared. Le Roy Percy backed them. Will Percy, after some feeble protests about putting their own economic welfare ahead of people’s lives, gave in.
In 1942, those same planters, or their sons, paid the local police to patrol the Illionois Central railroad depots to prevent the blacks from getting on the train to go to Chicago, where they could get work at, for them, big wages, in the war industries. In 1944 the first cotton picking machine came to the Delta. By 1945, the planters were buying one-way tickets to Chicago for the blacks.
On the levee the blacks filled and stacked sandbags, for which Percy set a pay scale of 75 cents per day. Those who were put to unloading and distributing Red Cross food parcels, which were starting to come to Greenville by barge to feed 180,000 people and thousands of animals.
Percy ordered all Greenville blacks to the levee. The camp stretched seven miles. Percy ordered that all the Red Cross work be done for free. There were too few tents, not enough food, no eating utensils or mess hall. Black men were not allowed to leave–those who tried were driven back at gunpoint by the National Guard.
The food they received was inferior to what the whites got. Canned peaches came in, but were not distributed to blacks for fear it would “spoil them. Whites kept the good Red Cross food for themselves. Giving it to the blacks, one white man explained, “would simply teach them a lot of expensive habits.”
In John Barry’s judgement, the levee was not a labor camp, it was a slave camp.
http://news.nationalgeographic.com/news/2001/05/0501_river4.html