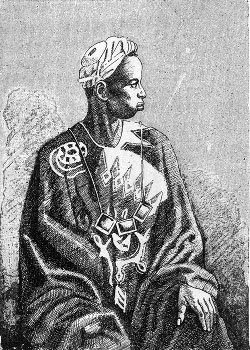 /ˈɡri.oʊ/; French pronunciation: [ɡʁi.o]) or jeli (djeli or djéli in French spelling) is a West African historian, storyteller, praise singer, poet and musician. The griot is a repository of oral tradition. As such, they are sometimes also called bards. According to Paul Oliver in his book Savannah Syncopators, “Though [the griot] has to know many traditional songs without error, he must also have the ability to extemporize on current events, chance incidents and the passing scene. His wit can be devastating and his knowledge of local history formidable.” Although they are popularly known as “praise singers”, griots may also use their vocal expertise for gossip, satire, or political comment.

Griots today live in many parts of West Africa, and are present among the Mande peoples (Mandinka, Malinké, Bambara, etc.), Fulɓe (Fula),Hausa, Songhai, Tukulóor, Wolof, Serer, Mossi, Dagomba,Mauritanian Arabs and many other smaller groups. The word may derive from the French transliteration “guiriot” of the Portuguese word“criado”, or masculine singular term for “servant.” These story-tellers are more predominant in the northern portions of West Africa.[citation needed]

In African languages, griots are referred to by a number of names: jeliin northern Mande areas, jali in southern Mande areas, guewel inWolof, gawlo in Pulaar (Fula). Griots form an endogamous caste, meaning that most of them only marry fellow griots and that those who are not griots do not normally perform the same functions that they perform. 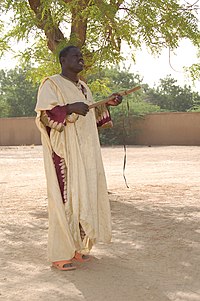 A Hausa Griot performs at Diffa,Niger, playing a Komsa (Xalam).

The Manding term jeliya (meaning “musicianhood”) is sometimes used for the knowledge of griots, indicating the hereditary nature of the class. Jali comes from the root word jali or djali (blood). This word is also the title given to griots in areas corresponding to the former Mali Empire. Though the usage “griot” is far more common in English, some griot advocates such as Bakari Sumano prefer the term jeli.

In the Mali Empire

The Mali Empire (Malinke Empire), at its height in the middle of the 14th century, extended from central Africa (today’s Chad and Niger) to West Africa (today’s Mali and Senegal). The Empire was founded bySundjata Keita, whose exploits remain celebrated in Mali even today. In the Epic of Sundjata, King Naré Maghann Konaté offered his son Sundiata a griot, Balla Fasséké, to advise him in his reign. Balla Fasséké is thus considered the first griot and the founder of the Kouyaté line of griots that exists to this day.

Each aristocratic family of griots accompanied a higher-ranked family of warrior-kings or emperors, which they called jatigi. In traditional culture, no griot can be without a jatigi, and no jatigi can be without a griot; the two are inseparable, and worthless without the other. However, the jatigi can accept a “loan” of his griot to another jatigi.

Most villages also had their own griot, who told tales of births, deaths, marriages, battles, hunts, affairs, and hundreds of other things. 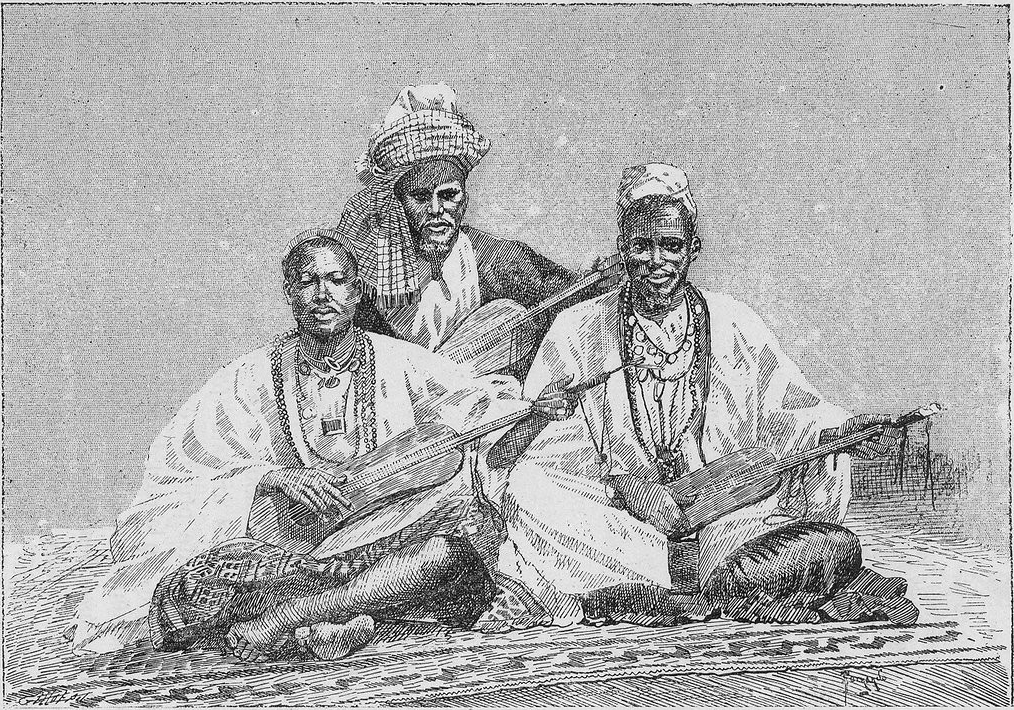 In Mande society, the jeli was as a historian, advisor, arbitrator, praise singer (patronage), and storyteller. Essentially, these musicians were walking history books, preserving their ancient stories and traditions through song. Their inherited tradition was passed down through generations. Their name, jeli, means “blood” in Manika language. They were said to have deep connections to spiritual, social, or political powers as music is associated as such. Speech is also said to have power as it can recreate history and relationships.

Bakari Sumano, head of the Association of Bamako Griots in Mali from 1994 to 2003, was an internationally-known advocate for the importance of the griot in West African society.

In the Malian film Guimba the Tyrant directed by Cheick Oumar Sissoko, the storytelling is done through the village griot, who also serves to provide comic relief.

In the late novels of the Ivorian writer Ahmadou Kourouma, Waiting for the Wild Beasts to Vote takes the form of a praise-song by the Sora, the Griot, Bingo to the president-Dictator of the fictitious République du Golfe. His final novel Allah is not Obliged also prominently features a griot character.

There are also references in the Alex Haley’s book Roots to a griot who passed down his family history through the oral tradition. When Haley traces back his history, passing from his previous generation through the slave time, back to Africa, he thought there should be griots telling his history and the history of his ancestor, known in the family as “The African”, who was captured in the bushes as he was seeking timber to make a talking drum. When Haley arrived in Africa to do research for his book, he believed he had actually found griots telling his history. Through them he learned the ancestor’s identity: Kunta Kinte. Since he had first heard the story from his grandmother and later refreshed by his older cousin, he believed that they were griots in their own way until someone put the story to writing. He later learned that his cousin had died within an hour of his arrival at the village.

However, this story illustrates the problems and complexities of oral tradition, especially when approached without expert knowledge. In 1981, it was shown (Wright, 1981) that the story of Kunta Kinte had been manufactured by a well-wisher. Following the publication of Roots, the story was being told in multiple versions with differing embellishments, having entered the stock of general stories.

In Paule Marshall’s Praisesong for the Widow, the protagonist Avatara (Avey) might take on some of the characteristics of a griot, especially in her commitment to passing on to her grandchildren her aunt’s oral story of the Ibos at the Landing, in which Africans brought to the U.S. Sea Islands to be slaves promptly turned around and walked back to Africa over the water.

Griot is the name of an instrumental track on Jon Hassell and Brian Eno’s ambient music album Possible Musics.

Innercity Griots is the second album by Los Angeles hip-hop group Freestyle Fellowship, released in 1993 through 4th & B’way Records. The group, consisting of four emcees: Aceyalone, P.E.A.C.E., Mikah 9 and Self Jupiter, received worldwide acclaim with their second project. Released during the prominent gangsta era of West Coast hip hop, Innercity Griots, along with albums such as The Pharcyde’s Bizarre Ride II the Pharcydeand Del tha Funkee Homosapien’s I Wish My Brother George Was Here, established an acclaimed era of alternative hip hop in California.

Malian novelist Massa Makan Diabaté was both a descendant and critic of the griot tradition. Though Diabaté argued on the one hand that griots “no longer exist” in the classic sense,  he also saw this tradition as one that could be salvaged through written literature. His fiction and plays blend traditional Mandinka storytelling andidiom with Western literary forms.

Griot, meaning urban storyteller and teacher of history, is referenced by Professor A.L.I. in the first line of his 2010 single “Guantanamo”.