By ROBBIE BROWN
Published: January 29, 2013
DARIEN, Ga. — Residents of a tiny barrier island in Georgia on Tuesday won a temporary reprieve from property tax increases that they feared would drive them from their historic community.

Taxes rose by as much as 1,000 percent last year on Sapelo Island, where the country’s largest population of Geechees lives. Sometimes called the Gullahs, the Creole-speaking descendants of African slaves have lived on the island and along the coast of the Southeast for more than two centuries.

McIntosh County officials say their land has long been undervalued. But on Tuesday, the county’s Board of Equalization sided with the residents and ordered a reassessment of their property.

Jeffrey A. George, an independent tax assessor who represented several dozen residents, discovered a county ordinance that prohibits any development on Sapelo that causes “land value increases which could force removal of the indigenous population.” 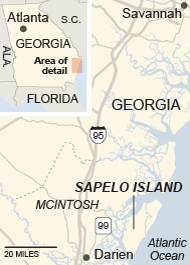 “We’re relieved,” said Edna Holmes, whose family has lived on the island for four generations and whose annual property taxes rose to $2,000 last year from $200. “The county is trying to tax us out. This is the last island with our culture. The fight is not finished.”

Ms. Holmes said that if taxes rose, her family would have to sell property to developers. She worried that the island would become a vacation destination like St. Simons or Hilton Head.

A new tax assessment is due by August. The chief assessor, Rick Daniel, said he believed that the taxes were calculated fairly. He said the large increases resulted from many years of undervaluation. “The previous tax assessors basically didn’t do their job,” he said.

Fewer than 50 people live on the 400-acre island, but it has a rich history. The tobacco heir R. J. Reynolds Jr. once lived in a plantation that is now owned by the state.

The Geechees have lived since at least the 19th century in a place called Hog Hammock, a cluster of tin-roofed houses with a historic cemetery, a general store and a small restaurant that serves shrimp and sausage. The island, about 50 miles south of Savannah, is reachable only by plane or boat. Michael Thurmond, a former Georgia labor commissioner who has advised the residents, said he wanted to protect the fragile culture. If the new tax assessment does not help residents keep their houses, he said, they would appeal to the county for a special tax exemption.

“We’re trying to save a piece of history,” he said.

US justice department announces it will end use of private prisons