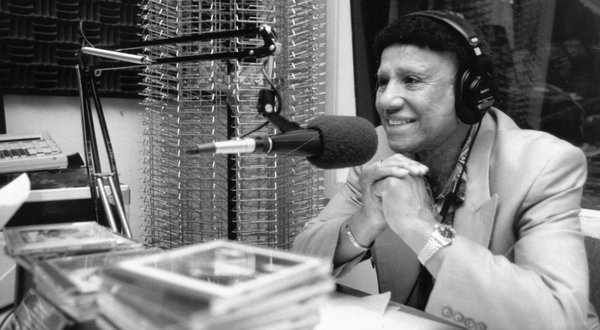 Hal Jackson, a veteran broadcaster who broke down racial barriers, becoming one of the first black disc jockeys to reach a large white audience and an omnipresent voice on New York City radio for more than 50 years, died on Wednesday in Manhattan. He was 96.

His death was announced by WBLS(107.5 FM), the New York station where he continued to host a weekly program until a few weeks before his death.

Mr. Jackson, whose eclectic musical taste and laid-back manner helped define black radio, began his career in the late 1930s, when it was a challenge for a black announcer just to get a foot in the door.

At a time when segregation was widespread, he was a familiar voice to black and white listeners alike. At one point in the 1950s, he was hosting three shows — one rhythm-and-blues, one jazz and one pop — on three different New York radio stations.

As a radio executive, he helped found Inner City Broadcasting and establish the urban contemporary format, rooted in black music but appealing to a racially diverse audience. In the 1970s, it came to dominate the airwaves, first in New York City — where WBLS became the No. 1 station in the market — and then across the country.

“Hal was the constant voice of black America,” the Rev. Al Sharpton said Thursday. “From M.L.K. to a black president, he literally was the one who connected those dots.”

Harold Baron Jackson was born in Charleston, S.C., probably on Nov. 3, 1915. (He explained in his autobiography, “The House That Jack Built,” that his birth, like that of many Southern blacks in those years, was not officially recorded.) He was one of five children of Eugene Baron Jackson, a tailor, and the former Laura Rivers. Both his parents died when he was a child, and he lived with relatives in Charleston and New York before settling in Washington, where he graduated from Dunbar High School and attended classes at Howard University.

Avidly interested in sports, he approached the management of WINX, owned by The Washington Post, in 1939 about covering black sports events for the station. Told that station policy prohibited hiring black announcers, he took a different tack: he persuaded a white-owned advertising agency to buy time on WINX for a 15-minute interview and entertainment show, without revealing that he was involved. As he recalled, he showed up in the studio at the last possible moment and was on the air with “The Bronze Review” before management could stop him.

“When I started, the business was so segregated,” Mr. Jackson said in 2008. “Fortunately, that didn’t last long.”

Indeed, once the station’s color line had been broken, Mr. Jackson went on to host a music show there and to broadcast Howard University football and Negro league baseball. He also became a sports entrepreneur, assembling an all-black basketball team, the Washington Bears, which won the invitational World Professional Basketball Tournament in 1943.

By the end of the decade Mr. Jackson could be heard on four different stations in the Washington area, most notably WOOK in Silver Spring, Md., where he established his warm, low-key radio persona with the music show “The House That Jack Built.” That approach, in contrast to the hyperkinetic jive-talking style of other black announcers, influenced generations of disc jockeys.

“How are you?” he would begin. “This is Hal Jackson, the host that loves you the most, welcoming you to ‘The House That Jack Built.’ We’re rolling out the musical carpet, and we’ll be spinning a few just for you. So come on in, sit back, relax and enjoy your favorite recording stars from here to Mars.”

While in Washington he was also a civil rights fund-raiser and broke into television as host of a local variety show broadcast live from the Howard Theater in the spring and summer of 1949.

Mr. Jackson moved to New York in 1954, and within a few years he was broadcasting almost around the clock, juggling three shows on three stations, including WABC’s live midnight broadcast from the jazz nightclub Birdland. (He was the first black announcer to host a continuing network radio show.) In the late 1950s, he also briefly had his own Sunday morning children’s television show.

Mr. Jackson’s hectic schedule was interrupted in 1960 when he was caught up in the so-called payola scandal, charged with accepting bribes to play certain records and forced off the air for a while in New York. The charges were eventually dropped.

He began his long career as an executive in the early 1960s as program director of the Queens station WWRL. He went on to produce and host concerts at the Apollo Theater in Harlem, in Central Park and at Palisades Amusement Park in New Jersey. He helped establish the Miss Black Teenage America pageant, later renamed Hal Jackson’s Talented Teens International. He also organized fund-raising events for civil rights causes and was among the first to lobby for making the Rev. Dr. Martin Luther King Jr.’s birthday a national holiday.

In 1971 he was one of a group of black entertainers, businessmen and politicians, among them Percy Sutton, the Manhattan borough president, who formed Inner City Broadcasting and bought WLIB-AM and its FM sister station, which became the first black-owned radio station in the city.

As vice president of the FM station, which was renamed WBLS, Mr. Jackson hired the disc jockey Frankie Crocker as program director and oversaw the station’s shift from jazz to what Mr. Crocker christened urban contemporary radio: a slick blend of rhythm-and-blues, dance music and other genres designed to appeal to young listeners across racial lines. (In later years hip-hop was added.) When Mr. Crocker left, Mr. Jackson became program director; by the mid-1970s, WBLS was the No. 1 station in New York.

Working behind the scenes at Inner City rather than behind the microphone, Mr. Jackson helped shape programming at stations acquired by the company around the country as it grew into the first black-owned radio empire. But when a slot opened on Sunday mornings at WBLS, he decided to return to the air.

His “Sunday Morning Classics,” a mix of music from different eras and genres, made its debut in 1982. Originally two hours, it grew at one point to an eight-hour extravaganza. As “Sunday Classics,” the program was most recently on from noon to 4 p.m.

Mr. Jackson’s co-host on “Sunday Classics” was his fourth wife, the former Debi Bolling. His previous three marriages ended in divorce. His wife survives him, as do two daughters, Jane and Jewell; a son, Hal Jackson Jr., a former Wisconsin Supreme Court justice; and numerous grandchildren and great-grandchildren.

“Hal Jackson was one of the last living links to when black voices were as rare on radio as they were on the silver screen,” the author and filmmaker Nelson George said Thursday. “He connected several generations of listeners to the bounty of great African-American music by not always observing the artificial boundaries between jazz, blues, Broadway, and rhythm and blues.”

Mr. George, whose books include “The Death of Rhythm and Blues,” said Mr. Jackson had “helped black people see the best in themselves, both before and after the civil rights movement.”

In recent years, Inner City Broadcasting fell on hard times. In 2011, the company, under legal pressure from its creditors, agreed to enter Chapter 11 bankruptcy. (It has since been bought by the investment group YMF Media.) As part of the process, the company proposed hiring a chief restructuring officer. The one stipulation Inner City requested was that the officer be forbidden to fire four specific people. One of the four was Hal Jackson.

Black pastors take gun control into their own hands