Will.i.am was left speechless on the Graham Norton show last night after Harry Potter actress  Miriam Margolyes told the star that she was ‘fascinated’ to meet him because he is black.

The actress, 71, said: ‘Unfortunately, I don’t know many black people. We don’t get to meet across the colour line much except in showbusiness and that’s what’s so nice.’ 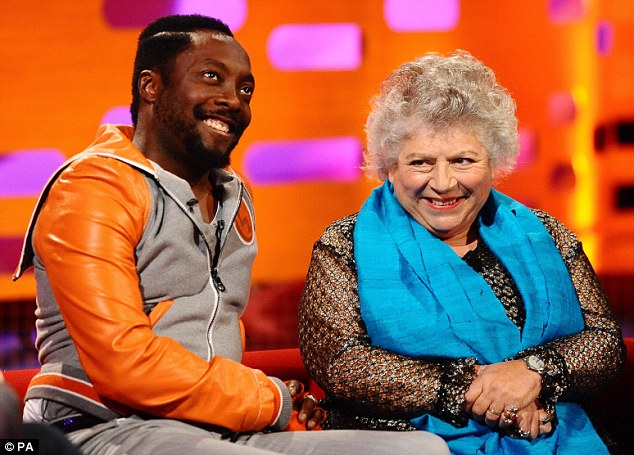 WHAT a gaffe: Will.i.am was left speechless on the Graham Norton show last night after Harry Potter actress Miriam Margolyes told the star that she was ‘fascinated’ to meet him because he is black

Miriam was clearly very taken with Will, and visibly impressed by his recent generous donation to the Prince’s Trust.

She said: ‘You’re fabulous! How unexpected that a rapper would do this. I don’t have a very positive attitude towards rappers. I don’t really know any, you’re the first one I’ve actually talked to.’

Recovering his composure, Will replied: ‘I’m the first rapper and black guy you’ve kicked it with!’, then went on to teach Miriam the meaning of the phrases: ‘home boys’ and ‘old school’. 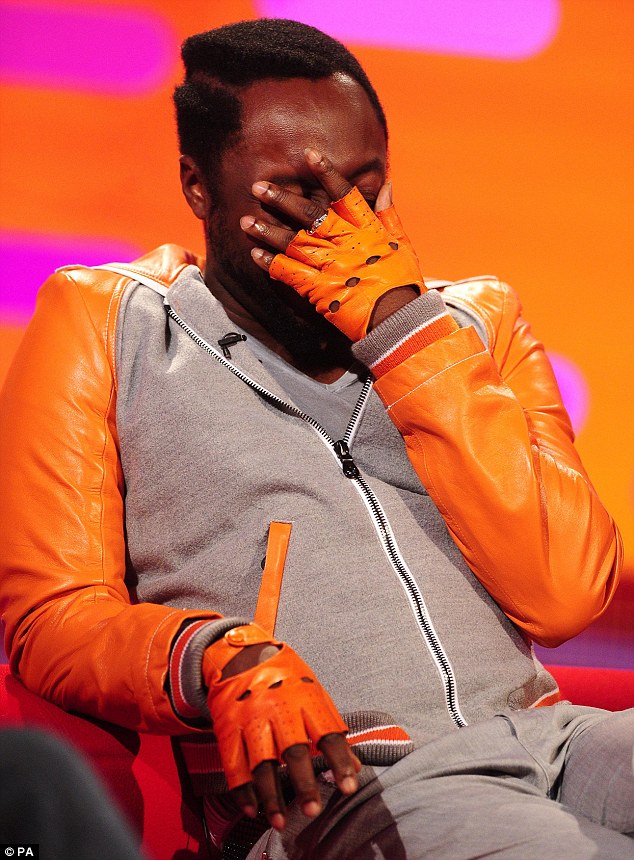 Lost for words: Will couldn’t stop laughing as Miriam continued to talk about how pleased she was to meet a rapper

Miriam later made him laugh again when she asked whether he had ‘heard of Jews’.

What might have been a tremendously difficult situation remarkably became very endearing, and viewers took to Twitter to voice their wishes that Will and Miriam ‘have their own sitcom.’

Graham also asked Will about his recent involvement with the Jubilee Concert- prompting a hilarious moment when Miriam failed to recognise Prince William, gasping ‘but he’s bald!’. 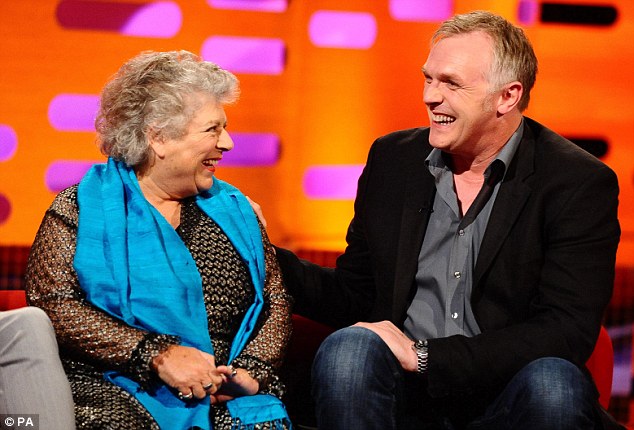 Tried to diffuse the situation: Inbetweeners star Greg Davies joked that Miriam’s encounter with Will was ‘exotic’

Will has been praised for donating £500,000- most of the money he earned from The Voice – to the Prince’s Trust.

He explained: ‘I had so much fun doing The Voice and your country didn’t need to accept me the way it did.  I just didn’t feel taking the money I earned so wanted to use it for some good.’

He also confirmedthat NASA has asked him to write the first song to be played on Mars, saying: ‘I don’t think I can talk about it, but there is a rocket going to Mars.’ 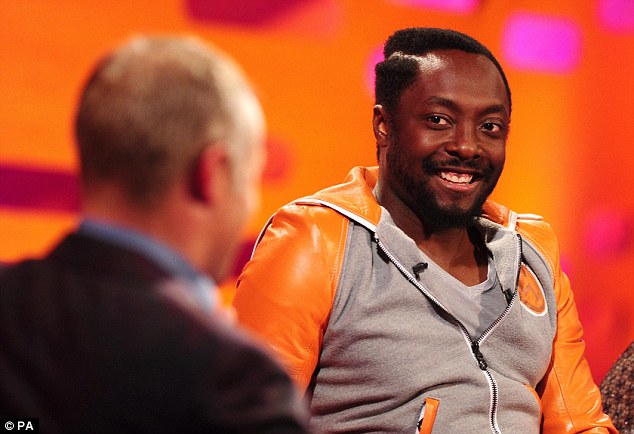 Made a good impression: Miriam said that Will.i.am was ‘fabulous’ when she heard about his £500,000 donation to the Prince’s Trust

‘Iit lands in August and when in lands it will send back a signal to earth and that signal will be the song.’

‘This project with NASA is to help inspire kids to get involved in science, technology, engineering and mathematics.  My mission is to inspire the youth to care about education.’

Quizzed over the controversy he caused by tweeting while carrying the Olympic torch, he answered: ‘I had to keep it a secret for a while and it was hard for me not to Tweet about it.’ 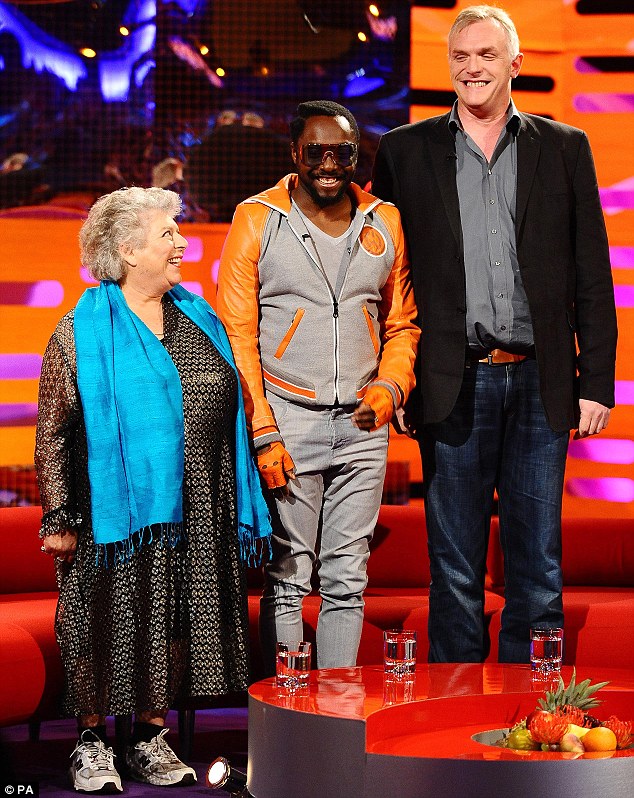 Compared heights: The three guests stood next to each other to emphasise their size difference

‘That’s when I was allowed to Tweet about it! When they created the Olympics there wasn’t Twitter.  The torch is a light and all I was doing was sending the light across the planet.’

Miriam shared a few anecdotes of her own, revealing that she once scared some BBC painters who teased her about her ample bosom. 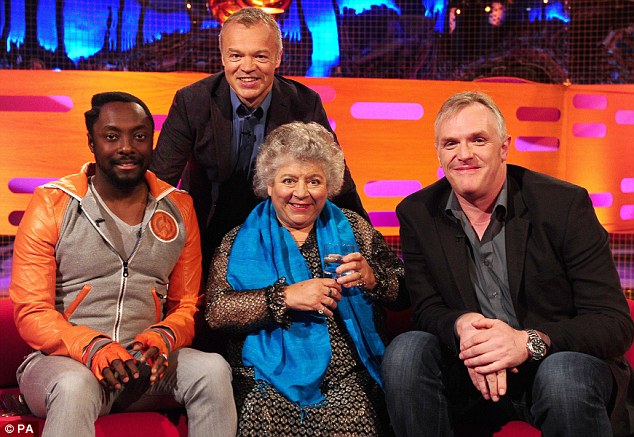 A resounding success: The odd bunch made for a very entertaining episode

She said: ‘They were making fun of me and I thought, “I’m not having that” and I put their great big hands on my great big breasts and they were terrified.’

‘The next time I walked down the corridor they were busy painting and didn’t say a word!’