By DAN DUGGAN
Published: January 20, 2013
Kyle Casey woke at dawn most mornings over the summer. He would head straight to the weight room, hoping to add bulk to his 6-foot-7, 225-pound frame, and then to the basketball court, to sharpen the skills that made him a first-team all-Ivy League selection last season as a junior.
Casey was driven by a desire to lead Harvard, the team he was elected to captain, to a second consecutive N.C.A.A. tournament appearance and to bolster his N.B.A. prospects with a productive senior season.
He never got the chance.
Instead, he is working for a nonprofit foundation that conducts after-school programs for children in third, fourth and fifth grade.
“It’s just a good atmosphere,” Casey said, “especially with what I’ve been going through.”
In August, Casey was implicated in a widespread cheating scandal at Harvard that, the university said, involved as many as 125 students in a government class during the spring 2012 semester. The students “may have committed acts of academic dishonesty, including inappropriate collaboration and plagiarism, on a take-home final exam,” the university said. The college’s administrative board launched an investigation that is continuing. 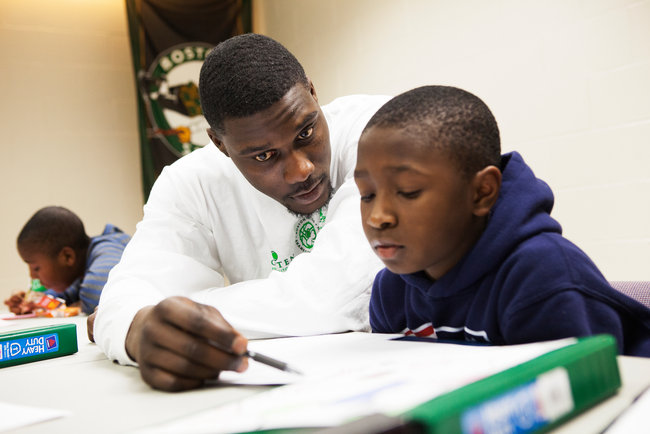 Kyle Casey working with Tyler Parry, 10, as part of 3PointFoundation, a free after-school program for boys.

Facing the possibility of a one-year suspension, Casey voluntarily withdrew from college on Sept. 11 to preserve his final year of eligibility. When he made the decision, he knew only that he needed to fulfill some university requirements — primarily to work a full-time job for six months — in order to return the next year.
“It’s a lot of soul-searching because when you feel like you’re on top of the world and then everything is kind of just stripped from you, it’s a reality check,” Casey said. “It’s humbling, and you come back down to earth a little bit and figure out life.”
Casey became the face of the scandal, a relatively public figure when compared with his anonymous classmates, and he found himself the focus of negative news media attention for the first time.
“It was a rough period,” Casey said. “You see the true colors of a lot of people, whether that’s good or bad.”
A native of Medway, Mass., Casey initially moved to New York to work with Kenny Blakeney, who was an assistant at Harvard from 2007 to 2011, when he left to start a sporting apparel company.
Casey soon decided he would be better served returning home. He followed up on a message from Andrew Mirken, the basketball coach at the Rivers School in Weston, Mass., who had worked with Casey at Harvard basketball camps. They discussed the 3PointFoundation, a nonprofit organization that Mirken founded in March with Neil Jacobs, the longtime lawyer for the Boston Celtics.
The foundation conducts a free after-school program that is designed to help boys improve their skills in the classroom and on the basketball court in an attempt to point them toward a path to college.
“We have kids in our program that have been shot at, have brothers that have been shot and killed, their dads are incarcerated,” Mirken said. “When you give them an African-American role model, a young male, who is at an Ivy League school, he’s obviously going to change what these kids’ lives are.”
Casey grew up in suburban New Orleans before moving to Medway, a small town 35 miles southwest of Boston, when he was in middle school. He did not have an inner-city upbringing but says he can relate to the children in the program.
Casey’s father is not a part of his life, and his mother, Sharon, a health care provider, raised three sons on her own.
“There’s this belief that if you live in the suburbs, everything is wonderful,” Sharon Casey said. “That’s not always the case. He could have been any one of those kids.”
Kyle Casey remains in contact with his teammates and watches Harvard’s games when they are televised, but he has remained relatively detached from the team. The Crimson lost to Memphis, 60-50, on Saturday to fall to 9-6.
“Now that the basketball season is upon us, it’s kind of in your face all the time,” Sharon Casey said. “I don’t know if people want to see him publicly mourning or what the case may be, but I just think some things should be left private.”
Kyle Casey has not been alone in enduring a year of limbo. Brandyn Curry, who had also been elected a captain, withdrew from college in September because of the cheating scandal. He is now home in Charlotte, N.C., selling life insurance.
“I’m learning about real life,” Curry said. “I’m learning how hard real life can be when you’ve got to make money and you’ve got to go work a job. I’m growing up really fast and really maturing.”
Casey and Curry said they spoke on an almost daily basis, although rarely about the scandal and its fallout. They both plan to return to Harvard and the team next season.
Casey said he believed the biggest help during this ordeal had been working with the foundation.
“I think being in his program has really rejuvenated me,” he said. “It’s given me that spirit again and the energy to wake up every morning with a passion and a purpose to make a difference in someone’s life, if not my life.”
Some of the students in the program know about Casey’s situation, but most do not. Casey plans to explain everything eventually so they can use it as a lesson, he said.
His message, he said, will be simple: “Be careful with what you’re doing, and stay focused, because it can all be gone quick, like overnight.”

‘Young Black Philanthropist’ Is Not an Oxymoron