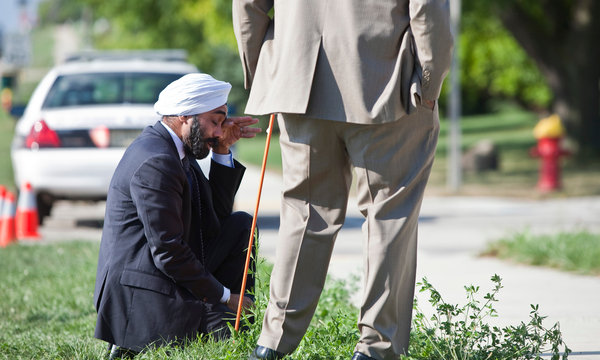 Amardeep Singh of New York came to the Sikh Temple in Oak Creek, Wisconsin, on Tuesday.

MILWAUKEE — The shooting rampage by an avowed white supremacist that killed six people at a suburban Sikh Temple near here came at a time of both growth and disarray in the supremacist movement.

Though data collected by theSouthern Poverty Law Center, which monitors hate groups, shows that the number of ultra-right-wing militias and white power organizations has grown sharply since the election of President Obama in 2008, the movement is more decentralized and in many ways more disorganized than ever, experts and movement leaders say.

“There is plenty of frustration and defeatism in the white nationalist movement,” Don Black, director of Stormfront, the largest white nationalist online discussion forum in the world, said in an interview. Calling Mr. Obama “a symptom of the multiculturalism that has undermined our country,” Mr. Black added that “there is no preeminent organization today.”

Yet the shootings also shined a light on an obscure cultural scene that is helping keep the movement energized and providing it with a powerful tool for recruiting the young and disaffected: white power music, widely known as “hatecore.”

For more than a decade, Wade M. Page, a former soldier who the police say was the lone gunman — and who was himself killed by a police officer on Sunday — played guitar and bass with an array of heavy metal bands that trafficked in the lyrics of hate.

Even in Mr. Page’s below-the-radar world, those bands — Blue Eyed Devils, Intimidation One and his own, End Apathy — provided a touchstone and a gateway to a larger cause, as they have for many others in recent years.

“It is one of the pillars of the white supremacist subculture,” Mark Pitcavage, director of investigative research at the Anti-Defamation League, said of white power music. “The message can motivate people to action, cause them to be proud of themselves and their cause. It can aggravate anger levels. It can rouse resentment.”

Two of Mr. Page’s bands make a cameo appearance in an F.B.I. informer’s report made public this year in a Florida drug investigation of people involved in white supremacist groups. The informer, who is not named, reported that the bands, Definite Hate and End Apathy, both played at a $20-per-person St. Patrick’s Day gathering of the Confederate Hammerskins group last year at a bar in rural Christmas, Fla.

Arno Michaelis, the former leader of a white power band called Centurion, whose CD “14 Words” has sold 20,000 copies worldwide, recalls being swept away when he heard racist music from the British skinhead group Skrewdriver in the 1990s.

“Listening to that music was an essential part of how we rallied around the idea of racism,” said Mr. Michaelis, now 41. “It made me feel I was part of something greater, that I had purpose and that my race was something very special and was something I needed to defend.”

A Milwaukee resident, Mr. Michaelis distanced himself from the racist scene years ago, but was stunned to receive a call in 2005 from a German neo-Nazi who wanted him to reunite with Centurion for a European tour. The call prompted him to help form an organization, Life After Hate, that evangelizes against racism.

Though what may have set off the rampage remains a mystery to investigators, Mr. Page’s life as a white power musician playing violence-inciting songs was surprisingly open. He did interviews, posted photos on MySpace pages (one shows him playing guitar with a noose in the background), performed at festivals and even spoke candidly about his beliefs with an academic researching the movement.

The academic, Peter Simi, an associate professor of criminology at the University of Nebraska, Omaha, said he met Mr. Page in Southern California in 2001, when Mr. Page was living with a white supremacist whom Mr. Simi had followed.

Mr. Simi said Mr. Page told him that he had first come in contact with racist skinheads in Denver as an adolescent, but became a true convert after joining the Army in 1992. Mr. Page received a general discharge in 1998 after being knocked down a rank to specialist for misconduct.

“He told me if you don’t go into the military as a racist, you will certainly come out as one,” Mr. Simi said in an interview. “He felt the deck was stacked against whites in the military, and that blacks got all the promotions and were not disciplined for misconduct.”

After Timothy J. McVeigh, a former soldier, bombed the Oklahoma City federal building in 1995, the Pentagon declared a “zero-tolerance” policy for racist activity. But in 2006, a report by the Southern Poverty Law Center found that recruiting shortfalls caused by the war in Iraq had allowed “large numbers of neo-Nazis and skinhead extremists” to enlist, and that neo-Nazi groups like the National Alliance were trying to recruit followers in the military in preparation for a race war.

In a statement released this week, a spokesman, George Wright, said the Army has been vigilant about racism in its ranks and did not tolerate “extremist behavior.”

Racist and neo-Nazi rock began as an offshoot of British punk in the late 1970s, appropriating both its shaved-head style and so-called oi sound featuring slashing guitar chords and barked vocals. By the 1990s, the music had become heavier, louder and darker, featuring violent diatribes against blacks, Jews and, later, gays and immigrants.

In 1999, the National Alliance, founded by William Pierce, author of the 1978 white supremacist novel “The Turner Diaries,” bought Resistance Records, the largest and most prominent label for white power music. The acquisition signaled the growing importance of the music to recruiting a new generation of white supremacists.

“The music became not only the No. 1 recruiting tool, but also the biggest revenue source for the movement,” said Devin Burghart, who has been monitoring racist hate groups for 20 years.

But Mr. Burghart and other experts on racist ideology said the movement has grown disjointed in recent years, despite the recruiting opportunities presented by an economicrecession and the election of a black president.

One reason for the disarray might be the growth of a more mainstream movement, theTea Party, whose successful forays into electoral politics have siphoned energy and support from violent fringe groups, said Chip Berlet, a Boston-based journalist who writes about right-wing groups.

But the decentralization of the white supremacy movement may also encourage isolated actors — as Mr. Page appears to have been — to strike out, said Mark Potok, senior fellow at the Southern Poverty Law Center.

“When there are not large organizations, you are more likely to see lone wolves like Wade Page,” he said. “We are seeing a movement full of white-hot rage and frustration because they feel they have lost the battle to make America a white country.”