African American History
November 14, 2012 Ro Ho 0 Comments
Henry Sylvester Williams (February 15, 1869 – March 26, 1911) was a lawyer, councillor and writer. He was a prominent Trinidadian in the late 19th and early 20th century. Most notably, he was known for his involvement in the Pan-African Movement. Arriving in Britain in 1896, the Trinidadian formed the African Association which was to challenge paternalism, racism and imperialism. He stated that “the time has come when the voice of Black men should be heard independently in their own affairs”.

The major works on him remain the biographies written by late Trinidadian journalist Owen Mathurin and professor James R Hooker of the Department of History, Michigan State University.
Williams was born in 1869 in Arouca. As a young man he went to North America to further his education, and also to Canada.
Organising the first Pan African conference was a unique achievement for which Williams is given little credit today. When he formed the African Association, as it was first called, one of its aims was to “promote and protect the interests of all subjects claiming African descent, wholly or in part, in British colonies and other places especially Africa, by circulating accurate information on all subjects affecting their rights and privileges as subjects of the British Empire, by direct appeals to the Imperial and local Governments.”
Williams influenced W. E. B. Du Bois, who participated in the 1900 conference and who has come to be known as the father of modern Pan-Africanism. His famous Address to the Nations with its prophetic statement “the problem of the 20th century is the problem of the colour line” came to be regarded as the defining statement of the conference. But the idea for the conference and the association came from Williams.
There is a slight difference of opinion as to the month in which Williams was actually born. The late journalist Owen Mathurin, in his book Henry Sylvester Williams and The Origins Of The Pan African Movement 1869 – 1911, puts the date at St Valentine’s Day (14 February), 1869. Hooker, based on interviews with the son (Henry F.S. Williams) and daughter (Agnes W Burns), puts the date at March, 1869. His father Bishop Williams was a wheelwright from Barbados. His mother’s name was Elizabeth. Williams attended the Arouca School which at the time was run by a Chinese Trinidadian known as Stoney Smith.
His experiences turned him into a devoted Pan Africanist.

Ironically though, he loved, married and had children with a white English woman.
He started off his working life at age 17, becoming a teacher with a Class III Certification, and in 1887 was posted to the government school in San Fernando. This was significant, because according to the records he was one of only three teachers with certificates in that year. A year later he was the only certified teacher at the school in Canaan, just south of San Fernando; and the following year he was transferred to San Juan, where he remained until he left Trinidad in 1891. A cultured man, he was also qualified to teach singing and played the piano regularly.
An interesting point is that in January 1890 Williams became a founding member of the Trinidad Elementary Teachers Union. The feature address was given by Chief Justice Sir John Gorrie, was in favour of reform in government and was constantly at odds with the white ruling class. He frequently gave judgments against the establishment and was so beloved by the man in the street that he was known as “Papa Gorrie”.
He exhorted the teachers to act as professionals. This is a free country, he reminded them, even if it is a Crown Colony. Gorrie undoubtedly would have influenced his thinking.
Around that time as well, one of Williams’ acquaintances, a coloured lawyer named Edgar Maresse Smith, petitioned the Governor to declare August 1 a holiday for the celebration of Emancipation. Robinson did not support it but Gorrie did.
Even at that time, there was in Trinidad a highly-educated, articulate and race-conscious group of black men, among them John Jacob Thomas, Maresse Smith, Mzumbo Lazare, C E Petioni, the Reverend Phillip Henry Douglin. Thomas particularly was famous for his book Froudacity (1889) in which he refuted and questioned the view espoused by Oxford historian James Anthony Froude that black people could not be entrusted with self-government. Thomas’s ideas certainly inspired Williams.
Williams obtained a law degree at Dalhousie University, Halifax, Nova Scotia, and at King’s College London before going on to practice as a barrister in South Africa from 1903 to 1905, the first black man to do so. He practised around the same time as Mahatma Gandhi practiced as a lawyer. On his return to London, he became involved in municipal politics and won a seat on the Marylebone Borough Council in November 1906. He and John Archer became among the first people of African descent to be elected to public office in Britain.
He wrote to newspapers and journals on matters touching on Pan-African interests and lectured publicly on related topics—a series of activities which led to his organising the first Pan-African Conference in 1900 and becoming its first General Secretary.
He returned to Trinidad in 1908 where he rejoined the bar and practiced until he died four years later.

Williams wanted to get ahead; Teaching did not pay well (the salary was 83 pounds per annum). But then as even now, especially as he had not attended either of the two prestige boys schools—Royal College or St Mary’s he had to go abroad. Most likely he did so in 1891 for he is listed in the register of teachers in that year. A group of friends took up a collection for him dated July 10.
So he went first to New York, but that city in 1891 was for a black man a poor prospect. He who had been a school-master in the country of his birth could only get work shining shoes. He moved in 1893 to Dalhousie University, in Halifax, Nova Scotia again his experience was there was not happy and he did not graduate. In 1895, he went to London and entered King’s College London, but although it is known he studied there, there is no record of his enrolment at that time.
In his book on the life of Williams, Owen Mathurin notes “Williams was not as fortunate as some of his fellow Trinidadians who had come to study for professions at the expense of wealthy parents or as young winners of a government scholarship who received singular remittances.”

It was therefore not until 1897 he enrolled as a student of Gray’s Inn to read for the bar. There he satisfied the entrance requirements by passing a preliminary examination in Latin, English and History.
During this time Williams earned some money through lecturing for the Church of England Temperance Society. This took him to all parts of the British Isles speaking under the auspices of parish churches. He also lectured on thrift for the National Thrift Society whose chairman, Dr Greville Walpole, wrote that William’s “heroic struggle to make ends meet won his admiration because the little he was able to earn by his lectures simply defrayed the cost of living.”

Things had begun to move in the then 29-year-old Williams’ life. He was friendly with 32-year-old Agnes Powell who worked as a secretary with the Temperance Society. She was the eldest of a family of three sons and four daughters of Captain Francis Powell of Kent.
He was prominent in local Masonic and Conservative political circles. They married in 1898 in the face of the strongest opposition of her father who refused to give his consent and thereafter refused to receive him. They had five children, the first Henry Francis Sylvestre was born the following year.

Some time after June 1897 Williams formed what he first called the African Association, and later the Pan African Association. Williams’ good friend, Trinidad attorney Muzumbo Lazare, who at the time was in London taking part in Queen Victoria’s 60th anniversary celebrations as an officer of Trinidad Light Infantry Volunteers also met Kinloch and was appalled at the horrible treatment the Africans were receiving.
The meeting of these minds resulted in the formation of the Association and Williams gave his first address as honorary secretary in the common room at Gray’s Inn.
Some English people felt the Association would not last three months but by 1900 Williams was ready to hold the first Pan-African Conference (subsequent gatherings were known as Congresses). The three-day conference took place on July 23, 24, and 25 with delegates comprising “men and women of African blood and descent” from West and South Africa, the West Indies, the United States and Liberia.
After this Williams set about spreading the word and he embarked on lecture tours to set up branches in Jamaica, Trinidad and the United States. On June 28, 1901 the Trinidad branch of the Pan African Association was formed with branches in Naparima, Sangre Grande, Arima, Manzanilla, Tunapuna, Arouca and Chaguanas. He spent two months here and after his departure for the US even more local branches were formed.
But after this the profile of the Association suffered because he was not able to give it his full attention. On his return to London he finished his bar exams and went like Mahatma Gandhi to practice in South Africa where he stayed from 1903 to 1905. Williams was the first black man to be admitted to the bar in the Cape Colony.

Mr. Sylvester Williams was admitted as a barrister in the Supreme Court of Cape Colony last month. He is a West Indian. He was educated for the most part at Dalhousie University Canada, where he spent eight years and took his degree. Afterwards he became a member of Gray’s Inn, London. He has practised for several years in London, mainly at the Old Bailey. – Indian Opinion Nov 12, 1903.

He knew that non-whites were badly treated, but still he took this step. He was soon agitating for the rights of blacks. He also presided over the opening of a coloured preparatory school staffed by West Indians. He was eventually boycotted by the Cape Law Society for it was felt he was “preaching seditious doctrines to the natives against the white man”.

On his return to London, Williams decided to run for public office as he felt there should be an African spokesman in Parliament and his South African experience had given him the knowledge he needed to speak competently on these affairs. The blacks and coloureds were “my people” and on his arrival he gave the Colonial Office his views. “We should not be deprived of equal justice because of the colour of our skins,” he said.
Williams did not make it to Parliament but was elected to the Marylebone Borough Council in 1906. However, service as a councillor did not take him away from his interest in and devotion to Africa. He became involved with Liberian affairs and went there in 1908 at the invitation of President Barclay. He died on March 26, 1911, at the age of forty-two. 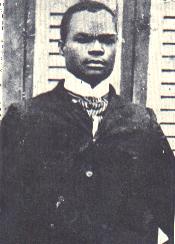 The University of the West Indies, St. Augustine, Trinidad & Tobago held a conference on ‘Henry Sylvester Williams and Pan-Africanism: A Retrospection and Projection’ on 7–12 January 2001.
He was named 16th on a recent list of the 100 Great Black Britons.