Instead of sifting through scholarship offers, selecting a school and launching his college basketball career as he originally planned, an Ohio high school standout will have to put his dreams on hold.

Tony Farmer, an 18-year-old senior at Garfield Heights High School, received a three-year prison sentence on Tuesday as a result of pleading guilty to kidnapping, felonious assault and other crimes.

The 6-foot-7 forward had been hoping to receive probation after teachers, coaches and family members testified on his behalf. When he learned he’d be going to prison as the judge read his sentence, he crumpled into the arms of a sheriff’s deputy and collapsed to the ground in anguish. 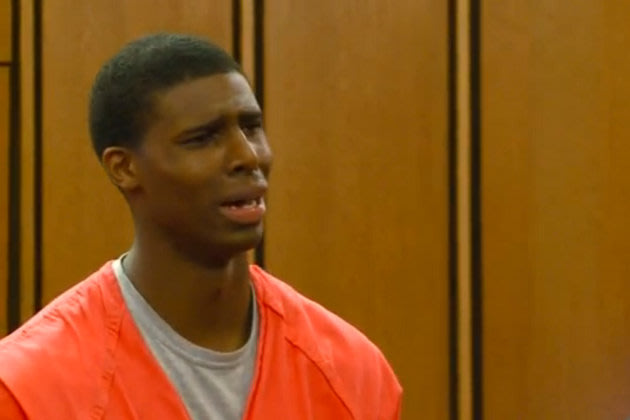 In an odd twist, among those in the gallery sobbing in reaction to the judge’s decision was the victim herself, Farmer’s ex-girlfriend Andrea Lane. Even though the two remain separated since Farmer attacked Lane last April after she didn’t want to reconcile their relationship, Lane had previously asked Judge Pamela Barker not to put Farmer in prison.

“I know he was a good person,” she said, according to the Cleveland Plain Dealer. “I hope he still is.”

The entire courtroom scene is depressing and painfully hard to watch because Farmer had such a bright future prior to this incident. Before video cameras caught his altercation with Lane on tape last April in the lobby and parking lot of her apartment complex, Farmer was a consensus top 100 prospect who had drawn interest from the likes of Ohio State, Xavier, Dayton and Michigan State.

The punishment he received from Barker is just yet severe. Unless Barker reduces Farmer’s sentence when she reviews it in 180 days, his hopes of playing major college basketball are likely now over.

The Event How Racist Are You Part 1-4