By MATT BLAKE
PUBLISHED: 04:05 EST, 16 July 2013 | UPDATED: 04:23 EST, 16 July 2013
Balitmore Police are investigating claims a gang of black youths chased and beat a Hispanic man with the butt of a handgun while shouting, ‘this is for Trayvon’.
A dog-walker claimed to have witnessed the alleged attack on a street corner as she returned home and immediately posted an account on a community Facebook page.
It is the latest in a series of apparent ‘revenge attacks’ over the trial of George Zimmerman who was found not guilty of murdering 17-year-old black teenager Trayvon Martin on Saturday in a case that has divided America. 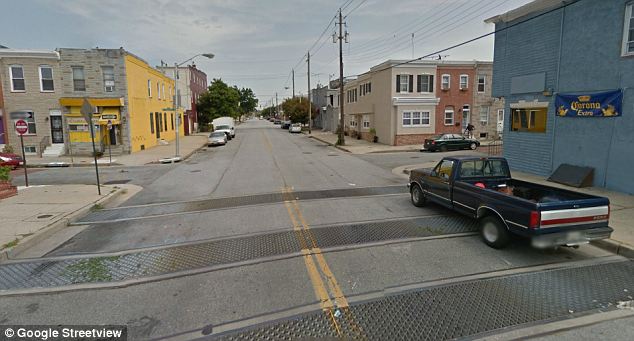 Crime scene: Estate agent Christina Dudley said she was walking to her car just before 9pm last night when she saw several young black males and two black females chasing a 37-year-old Hispanic man down the street at the crossroads of E Fairmount Ave and N Streeper St

Estate agent Christina Dudley said she was walking to her car just before 9pm last night when she saw several young black males and two black females chasing a 37-year-old Hispanic man down the street.
‘One of the boys had a handgun out and it was pointed at the back of him,’ Dudley reportedly told police.

She said when they caught up with the victim they set upon him, punching, kicking and stamping on him, yelling expletives.
‘They were just yelling and calling him names as they ran after him, but once they were hitting him and after that they started yelling, ‘This is for Trayvon,’ said Dudley, who said she heard them shout the slur several times. 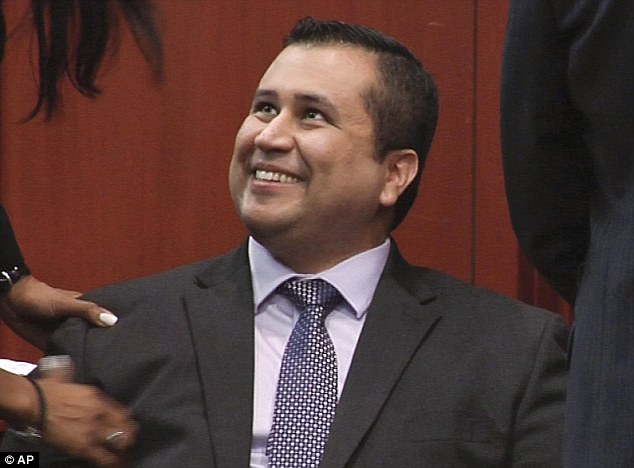 Relief: George Zimmerman breaks into a smile of relief a few moments after being cleared of all charges

She said she shouted that she was calling police and the gang scattered. Police are yet to make any arrests.
According to the police report, the unnamed victim told officers that he was standing in the cross roads of Fairmont and N. Potomac Street when a group of five black males approached him.
He said they were all between 16 and 18 years old and one, about 6 foot tall and with a mohawk, lifted his shirt to reveal a silver handgun in his waistband as he said: ‘What’s up?’
Police reported that three of the attackers were ‘skinny’ while one was ‘fat’. 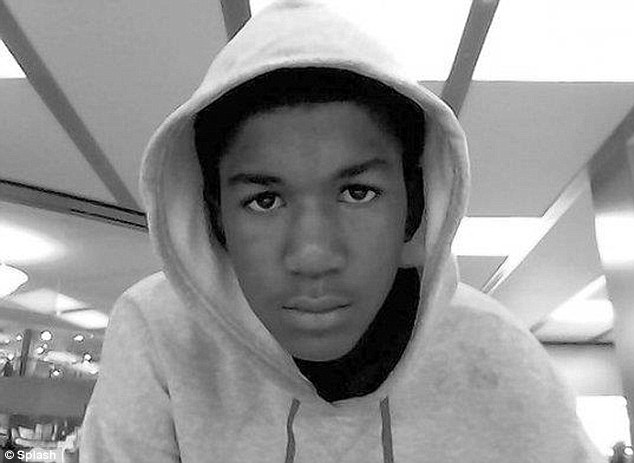 Victim: Trayvon Martin was shot and killed on February 26, 2012, as he was walking back from the 7/11 with a packet of Skittles and a can of juice

‘Everyone in the neighborhood is well aware of the situation, but my concern is that we have a very large Hispanic population and many of them might not have Internet connection or they aren’t on that page,’ Dudley said. ‘So my concern is trying to get the word out to them.’
The shooting of Martin, who is African-American, by Zimmerman, who is not, has fuelled new debates about racial profiling, gun-control, and self-defence laws.
The trial of George Zimmerman has proved one of the most divisive in recent history and has triggered a fierce debate that has shaken the nation and threatens to redefine American cultural identity.
What began as an issue of gun control and self-defence law soon morphed into one of race and class division. 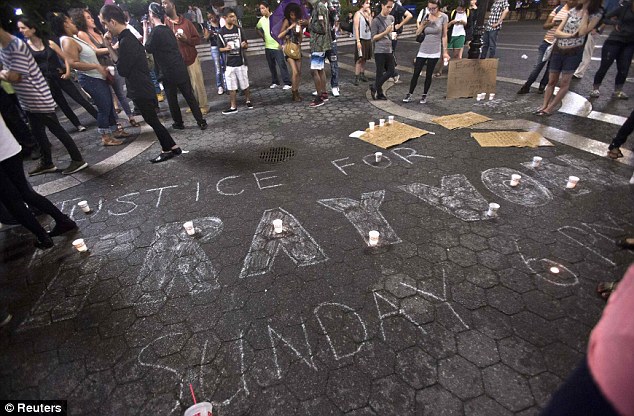 Public feeling: Crowds gather in Union Square, New York, to wait for the verdict in the trial 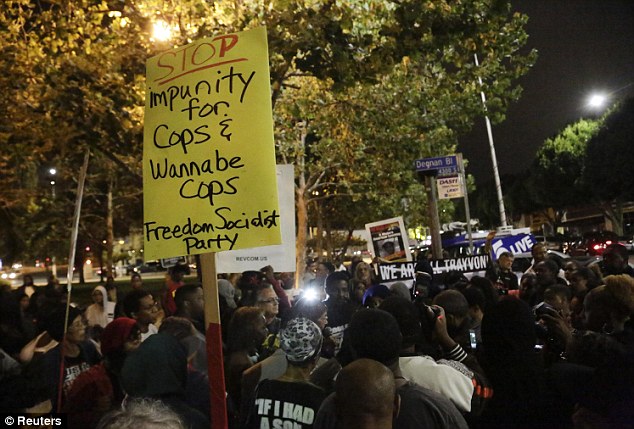 Rally: Protesters in Los Angeles gather to show their response to the Zimmerman trial on Saturday night 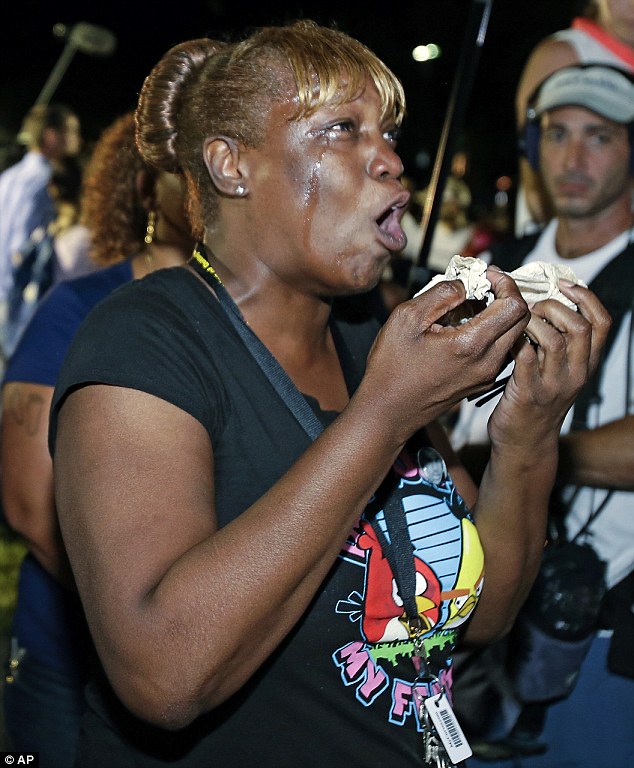 Shock: A Florida woman cries as she hears the not guilty verdict verdict outside the court house 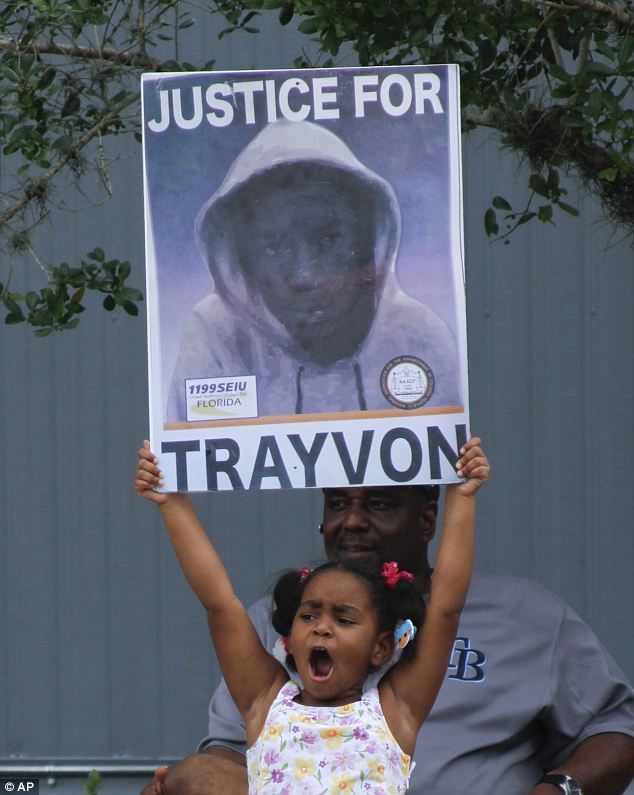 Despair: The trial of George Zimmerman has proved one of the most divisive in recent history and has triggered a fierce debate that has shaken the nation and threatens to redefine American cultural identity

Following the verdict, angry crowds gathered in major cities across the country late last night following the not guilty verdict in the Trayvon Martin case.

The demonstrators carried signs and gathered en masse from New York to Washington D.C. and Los Angeles. Though the marches were largely non-violent, police assembled close by to monitor activity – fearful strong reactions to the verdict could spill over into rioting.
In April – three months before the not guilty verdict was even given – Six youngsters aged between 11 and 17, both white and black, allegedly launched a merciless attack on 78-year-old Dallas Watts in East Toledo, Ohio.

According to a police report, cited by the Blade, as the boys beat Mr Watts they shouted: ‘[Get] that white [man]. This is for Trayvon … Trayvon lives, white [man]. Kill that white [man].’
Read more: http://www.dailymail.co.uk/news/article-2365135/This-Trayvon-Hispanic-man-beaten-gang-black-youths-alleged-Zimmerman-revenge-attack.html#ixzz2ZEwBPmni