The First African Baptist Church in Savannah has long been recognized as a national historic landmark for having the oldest African-American congregation in the country.
But a few local restoration experts recently discovered that another extraordinary, previously unrecognized, piece of history has been sitting silent in its sanctuary for decades.
“It’s an exceedingly valuable instrument, probably exceeding a half-million dollars. After restoration it could be worth more,” says Jim Abraham, professor of historic preservation at Savannah College of Art and Design, of the Erben tracker organ that sits on the second story of the sanctuary.
So what makes this organ so valuable? Abraham and Justin Gunther, also a historic preservation professor, tasked two of their students, Jordan Hodges and Whitney Crawford, to help them find out.
According to the team, the story behind this instrument begins with Henry Erben, “one of the most renowned organ builders of the 19th century,” Gunther said. He explained that while Erben, the son of the preeminent organist Peter Erben, lived in New York, he was one of the first manufacturers to start selling organs to churches in the South.

Joseph Jacob/ Savannah Morning News Jordan Hodges places a wooden pipe back into the organ while he and fellow SCAD student Whitney Crawford inspect the rear of the Erben organ at the First African Baptist Church.

“We know that only three Erben organs made their way to Savannah: Christ Church on Bull Street commissioned one 1831, St. John the Baptist Church commissioned one in 1834, and St. John Episcopal got one in 1836,” Gunther said. “So all the great old churches of Savannah. The only one to survive was the one at St. John the Baptist, which at that time was located on Drayton Street.”
The team’s research then revealed that in 1876, when the church moved, the organ remained in the Drayton Street building, which was subsequently used by an African-American congregation (not necessarily connected with First Baptist directly) for a while as well as an archive building for the Catholic Church.
“In 1888, First African did an expansion of their building. We know it gets donated from the Catholic Church to the First African, and we think that it corresponds with this major building campaign,” Gunther said. “So then it was used by the oldest black congregation in the country as their organ from 1888 until it falls silent in 1952.”
But just because it stopped playing then, doesn’t mean its story was over. As other organs in the city over the years were forgotten about or destroyed, this one remained, racking up notable bits of history along the way.
“It’s definitely the oldest surviving Erben in Savannah, and it may be the oldest surviving organ in Savannah. It was used first by the oldest Catholic Church in Georgia, and then was used by the oldest black congregation, so it’s got a lot of history,” Gunther said.


Abraham, an organ enthusiast, first learned about the instrument when Janet Lee, the church administrator for First African, asked him and his students to help her evaluate the restoration needs of the entire sanctuary.
“Our dream and goal is to restore the church back to its original look,” Lee said. “It’s had a few things done, but it’s never had a major restoration.”
Lee said she understands a major restoration of the church is going to take time and be fairly costly, but that preserving the connection between generations is hugely important to her and all the members of the church. That’s why she is happy to start the process with the organ, which she said helps set the stage for worship.
“That’s what historic preservation and exploration does. It brings about connections, new relationships that you weren’t aware existed before. And now you can reconnect,” Lee said. “We never knew we were connected with the Catholic Church.” 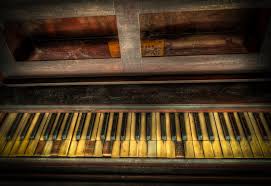 
Abraham explains that the tracker organ, meaning non-electrical, probably has about 600 pipes and lots of other intricate mechanics, which is why he is currently working with organ specialist Art Schlueter in Atlanta to determine the true cost of restoring the instrument.
“Right now he is estimating that the work is going to cost between 150 and 200 thousand dollars, depending on how much vintage equipment is available,” Abraham said.
But Lee and Abraham are not waiting for the exact number to get started with fundraising for this project. They are already seeking funding from local or national sources of all kinds. Once restored and able to play again, Abraham said there’s no doubt it will be eligible for numerous national registries and distinctions.
“I think that it has survived, that’s it’s still here because it’s meant to be restored. Its time has come and now we’ve got to find a way to do it,” said Abraham. “I like to think of organs as the voice of the church, and we’re trying to help put the voice back into the church.”

Many American's in the 1860's moved to Haiti, and used Haitian Revolution as inspiration