African American History
April 30, 2013 Ro Ho 0 Comments
By Mark St. John Erickson,  3:41 p.m. EDT, April 29, 2013
YORKTOWN— When the crowds came to Surrender Field in 1931 for the 150th anniversary of the American victory over the British at Yorktown, what they saw was an immense expanse of tents and an enormous grandstand.

Lost in all the patriotic hoopla was the historic black church and neighborhood that stood nearby, their own story of determination and independence hidden by the trees that lined the main road.
Founded by slaves in 1863, Shiloh Baptist Church and the African-American quarter originally known as Slabtown had not only survived the tumult of the Civil War but gone on to become a center of political and social change during Reconstruction. They continued that tradition during the darkest days of discrimination in the early 1900s, then led the fight to desegregate a half-century later.

Few members of the congregation imagined how important their old church would become in the 1970s, however, when the neighborhood was dismantled to restore a key part of the historic battlefield.
Yet since that daunting upheaval, Shiloh and its close-knit flock – many of whom can trace their ties back many generations – have not only persisted but flourished. 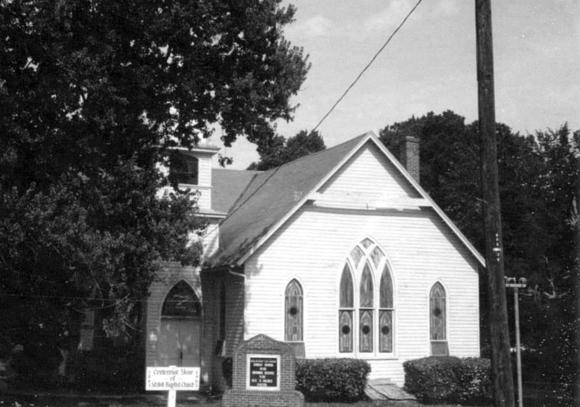 Built in 1897, the third sanctuary of Shiloh Baptist Church stood on the corner of Goosley and Cook Roads on the Yorktown Battlefield. (Courtesy of Shiloh Baptist Church / February 16, 2012)
“Many of the families here go back to Slabtown and the originalchurch,” says Cassie Phillips, who, along with her husband, Winston, heads the church’s ministry for African-American affairs.
“And when you have people who can say my mother was here, my father was here – my grandparents and great-grandparents, too – you have a special history. Even after the old church came down and the neighborhood moved across the highway, they continued to worship here. And that’s because this church has always been our anchor.”
Little is known about Shiloh’s founding pastor, a former Yorktown slave named John Carey, who joined with other refugee blacks to build a simple log and board-clad church on the outskirts of Slabtown.
But there’s no doubt about the influence of Carey’s chief ally – Rev. Jeremiah Asher – whose noted African-American church in Philadelphia gave its name to the fledgling mission.
The Connecticut-born grandson of a Revolutionary War veteran, Asher was a well-known opponent of slavery, especially after staging a high-profile vigil for abolitionist John Brown on the day of his execution. He also pressed for enlisting black troops in the Union cause, including two Pennsylvania regiments that served in Yorktown after Confederate defenders abandoned it in May 1862.
Intent on ministering to those soldiers and thousands of refugee slaves, Asher traveled South in 1863 and soon decided to enlist in the 6th U.S. Colored Infantry Regiment. But before leaving in May 1864, he joined Carey and other residents of the carefully laid-out, self-policed black town to found a church where African-Americans could decide for themselves how to worship.
“Asher was an extraordinary figure,” says Colonial National Historical Park’s Diane K. Depew, whose research has shed new light on the “nice, neat, tidy” town of slab-built cabins.
“He came here for humanitarian purposes – then enlisted in the 6th USCT. And every single white officer in the regiment supported his appointment as the unit’s chaplain.”
After Asher left, Shiloh soldiered on, supported by such powerful figures as trustee Daniel Norton.
Born a slave near Williamsburg in 1840, Norton fled with his brother to New York, where he studied medicine. He returned to Yorktown in 1865 and quickly became Slabtown’s chief spokesman.
Elected to the local Freedmen’s Bureau court, Norton soon ran afoul of bureau commissioner Samuel Chapman Armstrong – the future founder of Hampton University – who believed giving an African-American such an influential post was too radical.
Within two years, however, the undaunted Norton – who founded a secret black political group known as the Lone Star Society – was representing York and James City Counties at the state constitutional convention. He later served 13 years in the state senate, where – despite his frequent criticism of Armstrong – he helped secure the land grant that made Hampton University independent.
“The Nortons did command the black majorities in their counties,” writes historian Robert Engs in his landmark study of African-Americans on the Peninsula after the Civil War.
“And white Republicans found it expedient to acknowledge that fact.”
Inside his church, the well-to-do doctor was a mover and shaker, too, leading its relocation to a new site across from the National Cemetery in 1893.
When that church burned in 1897, he stepped up again, resulting in a stately sanctuary that cost a then-staggering $9,000.
Like many black churches across the South, Shiloh’s influence waned when the relatively progressive policies of the Reconstruction years gave way to the institutionalized prejudice of the Jim Crow era.
But it still boasted such prominent figures as educator Charles E. Brown, who became president of the stateNAACP as well as a tireless advocate for York County’s black schools.
Even 35 years after his death, his example can still be felt in the public park that bears his name and the stained-glass windows he dedicated to his church.
“Old Shiloh was a church of great influence,” Deacon Mark Giles says.
“When you talked about it, you were talking about the upper echelon of the people who lived here.”
Still, no change threatened that legacy more than the upheaval that took place when the federal government dismantled the neighborhood and its church in the 1970s for a battlefield preservation campaign.
More than 3 dozen families had to move from their old homes in the community that had been rechristened Uniontown, and – despite the Park Service’s success in spurring a nearby development where many residents resettled – the change was traumatic.
“It was not an easy thing to be uprooted,” says lifelong church member Annie Lofton, describing her father’s loss of his fruit trees, chickens and hunting dogs.
“And even if you were lucky enough to move into a place next to your old neighbors, you could no longer just go out the front door and walk to church.”
Raising money for the new church posed another challenge, one that the congregation met partly through a demanding campaign of fish fries, bake sales and spaghetti dinners.
But as trustee Ralph Carr recalls, no one backed down from investing in a bigger, newer modern structure.
More than three decades later, the wisdom of that $175,000 gambit can be seen in a bustling church that has not only persisted but prospered. Just five years ago Shiloh expanded again under the leadership of Pastor Barbara Lemon.
“In the last 10 years we’ve had such growth. It’s like nothing we’ve experienced,” says church Mother Ethel Curtis, whose ties here go back generations.
“After all we’ve been through, I’m just glad we’re here to see it.”
http://www.dailypress.com/features/history/dp-nws-black-churches-shiloh-20130429,0,1382115,full.story