This is the incredible photo showing two U.S. sprinters crossing the finish line on the same thousandth of a second during trials for the Olympics – a finish too close for even the camera to call.

Now a toss of a coin or a head-to-head sprint could decide whether Allyson Felix or Jeneba Tarmoh represents the country in the women’s 100 meters at the London Olympics, athletics officials said.

Felix and Tarmoh finished in a dead heat – at 11.068 seconds – for third place in Saturday’s 100 final at the U.S. Olympic trials. Until now, there has been no protocol for determining the winner. 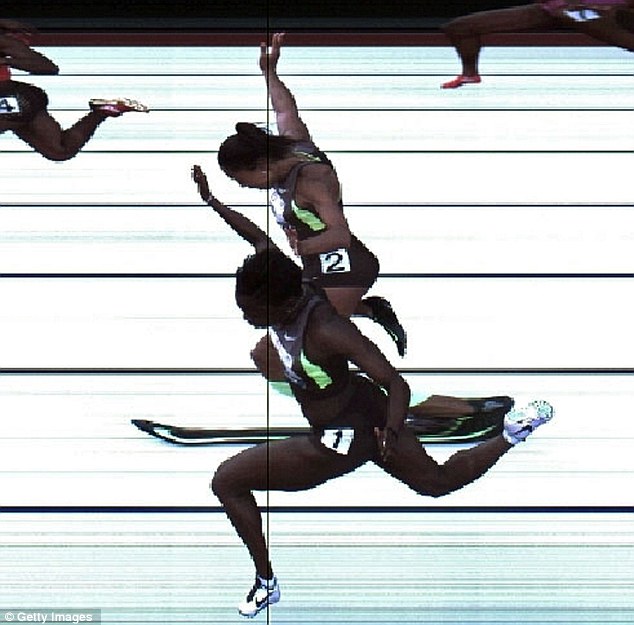 Too close to call: Jeneba Tarmoh (bottom) and Allyson Felix both cross the finish line for the Olympic trials with a time of 11.068. Now a head-to-head race or coin toss will decide the outcome

Officials spent most of the next 24 hours developing a procedure for breaking the deadlock.

Each nation can be represented by a maximum of three athletes per event at the Games.

U.S. officials said the final place, who would join world champion Carmelita Jeter and Tianna Madison for the 100 in London, would be determined by the time the trials end on July 1.

‘We will select our team before we leave here,’ USA Track and Field (USATF) spokeswoman Jill Geer said. 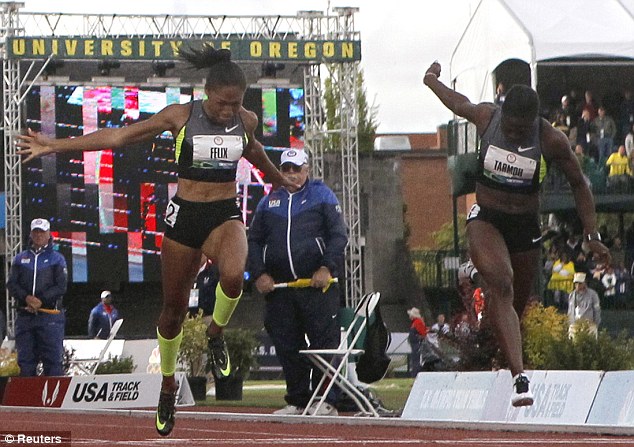 Battle: The track timer had initially named Tarmoh, right, as the winner before officials reviewed the results

Under the procedure, if neither athlete declines a position on the team, they can choose either a run-off or coin flip.

Bob Kersee, who coaches both athletes, said he considered the procedure, which was developed by USATF and U.S. Olympic Committee officials, to be fair.

‘But if there is a run-off, the health of the athlete must be protected,’ Kersee said.

If the two women fail to agree on which option to employ, the final place will be decided by a race. If they choose the toss of a coin, Felix, as the highest ranking athlete, would pick heads or tails.

The procedure, a two-page document, even specified details of the coin, which must be a quarter dollar with the image of first U.S. President George Washington on one side and an eagle on the reverse. 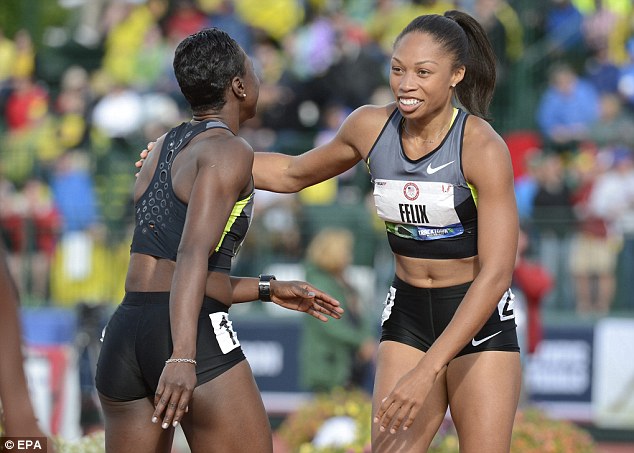 Both Felix and Tarmoh will compete in the 200 trials on Thursday and the finals for that event are on Saturday.

They have not been given an official deadline by which to make their decision for the 100 metre place. Kersey said they would not make their choice until after the 200 metre trials.

Kersee said that track officials ‘need to leave my athletes alone and let me coach them in the 200, then make a decision.’

He added that he would not choose which runner made the Olympic team because ‘it would be like, “Which kid do you love the most?”‘

‘I’ve never seen anything like this,’ Ato Boldon, a four-time Olympic sprinter from Trinidad and Tobago who now works as an NBC boradcaster, said, the New York Times reported. 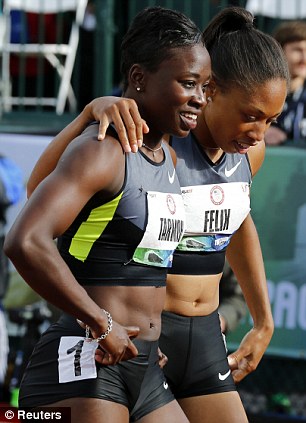 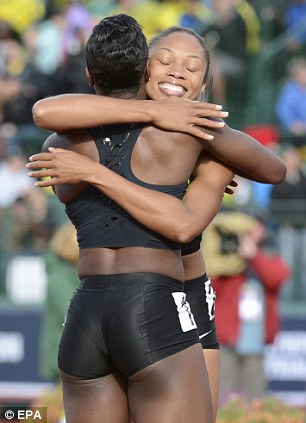 Support: The two women have the same trainer and contracts with Nike. If they choose to run in a head-to-head, it will take place after this weekend, when they are both trying out for the 200m team 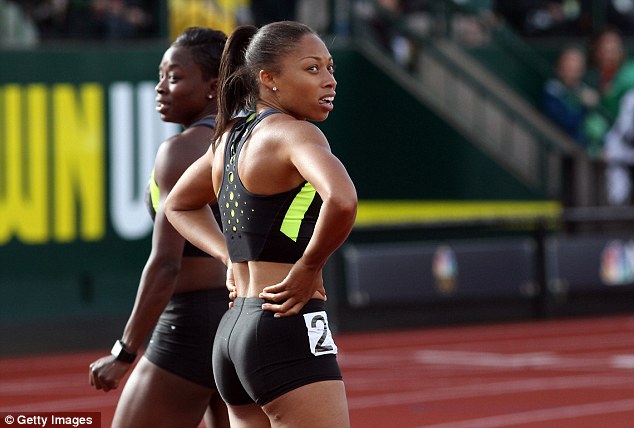 Anxious: If they pick a coin toss, Felix (right) would choose heads or tails as she is the higher ranking athlete

‘How long has this sport been around? It’s crazy that there’s not something very specific. I guarantee that there will be something put in there now. How we reached this point without a rule, I have no idea.’

At first, the timer had ruled Tarmoh was the winner, with Felix, who has won three Olympic medals, placing one-thousandth of a second behind her.

Brandishing a mini American flag, Tarmoh went to a news conference with Jeter and Madison, while Felix gave an emotional interview and said ‘fourth is the worst’.

But track officials revised the results and discovered there had been a tie.

Why Race Is Still a Problem for Mormons