“I definitely think Mitt goes in as an underdog,” Ann Romney said in a television interview earlier this month. Mr. Romney’s campaign happens to be imploding at the moment, but his supporters have been calling him an underdog since the primaries. In February, Mr. Romney said he was the underdog in Michigan, his home state. In June, Gov. Scott Walker said Mr. Romney was the underdog in Wisconsin. Sometimes, being just any old underdog isn’t enough. “He’s the tremendous underdog,” said a Republican committeeman in New Hampshire. 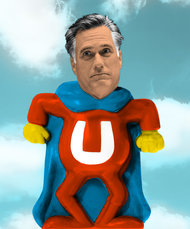 Illustration by The New York Times

The word “underdog” is an Americanism. I went into the archives to sniff out these sous-chiens. The expression dates from at least 1859, and a widely printed poem, “The Under Dog in the Fight.” The underdog is the cur who’s been bitten and trampled and who, at the end of the fight, lies bloodied and beaten. Sympathy for the underdog meant sympathy for the downtrodden. (“For my heart will beat, while it beats at all,/For the under dog in the fight.”)

The term became common during Reconstruction. In a Harriet Beecher Stowe novel published in 1871, one character says about another that he always “goes for the under dog: he is always ready to help the poor.” In 1879, a New York newspaper reported on a speech written by Frederick Douglass. “Besides occasional outbreaks of violence and bloodshed, the negro has been the ‘under dog,’ and treated as such,” the story reads, summarizing Douglass’s remarks. “Only a few years ago the negroes were bought and sold like cattle, and flogged and outraged, and sometimes murdered.” To be an underdog was to be treated like an animal.

Not long after that, underdogs entered politics. During the presidential election of 1884, supporters of James G. Blaine, who was defeated by Grover Cleveland, were referred to as “under-dogs.” But, more usually, underdogs weren’t the losers in political contests; they were the working poor. In 1912, in Congressional hearings on industrial relations, labor representatives referred to themselves as “we, the underdogs.” One told Congress that if a longshoreman was injured at work and went to a hospital, he’d be left untreated, “dirty and dusty… the last sort of person they want in the hospital” because he’s “the underdog.”

In the 1940s, social scientists used the word “underdog” as shorthand for “socially and economically underprivileged Americans.” A subject of great fascination, at the time, was that Americans tended to have a lot of sympathy for underdogs. (That sympathy is why we fight for equality.) This got political consultants thinking: what if we sold our candidates as underdogs? By 1954, the political scientist Herbert A. Simon had coined the phrase “the underdog effect,” to describe how doing badly in early polls can be a boon because American voters sometimes sympathize with losers.

IN 1963, Howard Schuman at Harvard and John Harding at Cornell published an article called “Sympathetic Identification with the Underdog.” They defined an underdog as an “ethnic minority facing discrimination.” They conducted an experiment on a sociology class in a northern college, two summer school classes at a college in the South, the white students in a class at Harvard on race relations, and a group of adults from Boston. They asked questions like this:

A colored man born in New England goes South for the first time and sees in a Mississippi bus station two waiting rooms, one for colored and one for whites. How do you think he would be likely to react to this?

(a) He probably thinks it is a good thing at present, since it prevents trouble from arising.

(b) He may notice it at first, but after a while he probably gets used to it and it doesn’t make much difference to him.

(c) He very likely feels hurt by it, and perhaps angry.

(d) It is hard to know exactly how he would react to such a situation, though with more information one might be able to tell.

One of their more interesting findings was that the people who were most sympathetic with underdogs were sympathetic with top dogs, too. Sympathy is sympathy. A white middle-aged Boston housewife who, answering a different question, expressed concern about how the people sitting on the back of a bus must feel, added that she was also worried about the people on the front of the bus, mainly because she found it so hard to put herself in their shoes. She said, “I think it’s probably hard for us here to understand how the white people there feel about it.”

“Underdog,” an animated television show that started in 1964, featured a beagle whose mission was to protect the poor and helpless from “those whose hearts are filled with greed.” An early idea for the series called him Downtrodden Man.

When Mr. Romney says he’s an underdog, that’s not humility: that’s branding. Last year, a team of scholars that included Harvard’s Neeru Paharia and Anat Keinan published a study called “The Underdog Effect: The Marketing of Disadvantage and Determination through Brand Biography.” They defined “underdog brand biography” as “an emerging trend in branding in which firms author a historical account of their humble origins, lack of resources, and determined struggle against the odds.” Their research, they say, demonstrates that telling a story about yourself in which you are an underdog builds brand loyalty, especially in cultures where “underdog narratives are part of the national identity.” Pretending to be an underdog is good business.

Mr. Romney’s branding himself an underdog to earn voter sympathy might not be the weirdest feature of his topsy-turvy campaign. It’s not even the most ruthless. But it is one of the saddest.