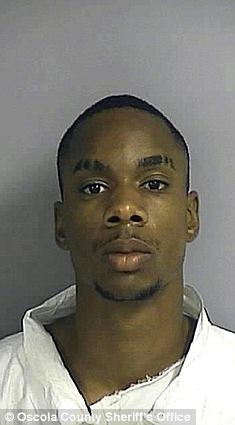 Ex-con: 20-year-old Milton Hodges (pictured) was on the run from the police when he was arrested

A homeless man who hijacked a golf buggy at knife-point in a nudist resort has been arrested after almost two months on the run for a separate crime.

Milton Hodges scaled a wall of the Cypress Cove Nudist Resort in Kissimmee, Florida, on Wednesday evening, before leaping over and drawing a large knife from his trousers.

20-year-old Hodges brandished his weapon at a security guard and demanded the golf cart, but he didn’t get very far.

The ex-convict was easy to spot by Sheriff’s deputies as one of the few people wearing clothes and they arrested him at gun point.

‘We usually don’t get the outside world coming through our gates like that,’ Ted Hadley, owner of the resort told the Orlando Sentinel.

‘We don’t get a lot of crime in The Cove, so this was definitely unusual for us. Definitely a lot of excitement.’

Earlier in the day, at about 7.30pm, Hodges was seen at the nearby Lowe’s home-improvement store where he claimed to be shopping for mango and banana trees.

He allegedly held scissors to the neck of an employee in failed robbery attempt before being chased from the store by clerks and customers.

Prior to his arrest on Wednesday Hodges had been on the run since April 1 after being accused in an armed robbery at a Kangaroo Express store in Green Cove Springs. 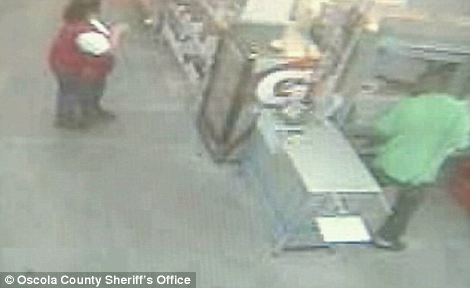 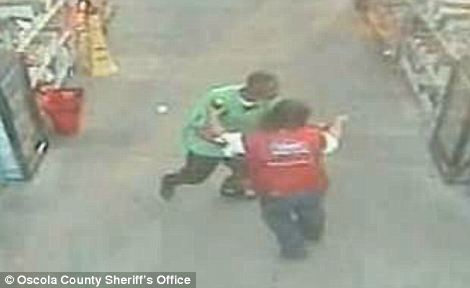 Armed: Milton Hodges allegedly held scissors to an employee’s neck, having claimed to be looking for mango trees

He was sentenced to 28 months in prison for the crime, during which he severely beat his victim with a can of Pepsi.

Hodges’ first offence was as an eight-year-old when he kicked a teacher and ‘threatened to kick her in the face’. He was charged with battery on a school employee.

He is being held without bail at the Osceola County Jail on at least 10 charges following his one-man crime spree. 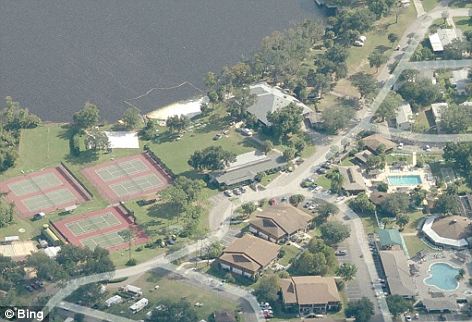 Ethiopian Jews Clash With Police in Israel over Racist Treatment