Patients with broken spines have reported having feeling restored to areas that had previously been paralysed, after receiving stem cell injections.

Scientists said they were ‘encouraged’ after two of three patients injected with donated foetal brain tissue responded to treatment at Balgrist University Hospital in Zurich, Switzerland.

Each patient had around 20million neural stem cells delivered directly into their injured spinal cords between four and eight months after they were injured. 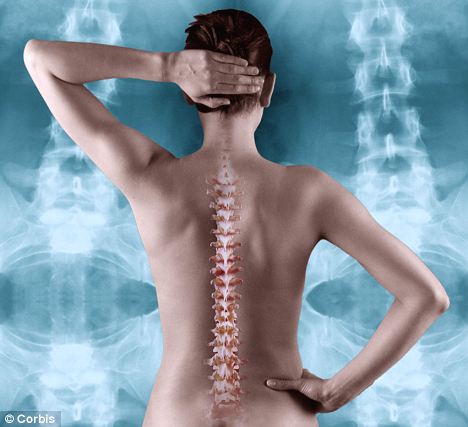 Before the treatment none of the patients could feel anything below the nipples. Just three months after therapy two of the patients reported feeling some sensation. By six months they could detect both touch and heat between the chest and belly button. The third patient detected no changes.

Stephen Huhn, vice president of StemCells in Newark, California, that is developing the treatment told the New Scientist: ‘The face we’ve seen responses to light touch, heat and electrical impulses so far down in two of the patients is very unexpected.

‘They’re really close to normal in those areas now in their sensitivity.’

The team said stem cells could be helping to restore myelin insulation to damaged nerves, which would improve the communications of brain signals. Or they could be reducing the inflammation on existing nerves.

‘We clearly need to collect more data to establish efficacy, but we are encouraged,’ Mr Huhn said.

He said the company will follow the patients for many years to see if feeling continues. It will also test the therapy on nine more patients with less severe spinal cord injuries.

StemCells is the first company to launch a neural stem-cell clinical trial since the U.S biotech company Geron abandoned the first ever trial in November 2011.

Geron had injected four patients with the stem cell therapy who displayed no ill effects. However, they had also not seen any improvements despite promising tests on rats.

The company blamed economic conditions and said it wanted to concentrate resources on two promising cancer drugs instead.