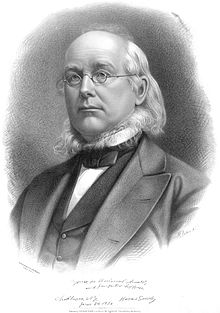 New York Tribune editor Horace Greeley publishes a passionate editorial calling on President Abraham Lincoln to declare emancipation for all slaves in Union-held territory. Greeley’s blistering words voiced the impatience of many Northern abolitionists; but unbeknownst to Greeley and the public, Lincoln was already moving in the direction of emancipation.

In 1841, Greeley launched the Tribune, a newspaper to promote his reform ideas. He advocated temperance, westward expansion, and the labor movement, and opposed capital punishment and land monopoly. Greeley served a brief stint in the U.S. House of Representatives, and he introduced legislation that eventually became the Homestead Act of 1862.

Greeley was most passionate in his opposition to slavery, and was an important organizer of the Republican Party in 1854. When the war erupted, Greeley, along with many abolitionists, argued vociferously for a war policy constructed on the eradication of slavery. President Lincoln did not outwardly share these sentiments. For the war’s first year and a half, Lincoln was reluctant to alienate the border states of Missouri, Kentucky,Maryland, and Delaware, which practiced slavery but had not seceded.

In his editorial, “The Prayer of Twenty Millions,” Greeley focused on Lincoln’s reluctance to enforce the Confiscation Acts of 1861 and 1862. Congress had approved the appropriation of Confederate property, including slaves, as a war measure, but many generals were reluctant to enforce the acts, as was the Lincoln administration. Greeley argued that it was “preposterous and futile” to try to put down the rebellion without destroying slavery. The “Union cause,” he wrote, “has suffered from a mistaken deference to Rebel slavery.”

Although he did not admit it publicly at that time, Lincoln was planning to emancipate slaves. He did so a month later with his preliminary Emancipation Proclamation.

http://www.history.com/this-day-in-history/horace-greeleys-the-prayer-of-twenty-millions-is-published
Read the Letter Below: