A SEMINAL moment for America’s avant-garde came in 1913, when the Armory Show opened its doors to an unsuspecting public. An exposition of about 1,300 works, it introduced the New York art audience to movements like Cubism, Fauvism and Futurism, as well as the work of artists like Pablo Picasso, Henri Matisse and Marcel Duchamp, jolting them out of their romance with realism and toward newer, more experimental interests.

Less heralded, however, is the fact that the Armory Show and its promotion of Modernism also helped create a taste and a market for African art in New York. This is the territory to be explored in “African Art, New York and the Avant-Garde,” which will open at the Metropolitan Museum on Nov. 27 and run through April 14. “The Armory Show is known for awakening America to modern art,” said its curator, Yaëlle Biro. “But it was also very important for African art.” 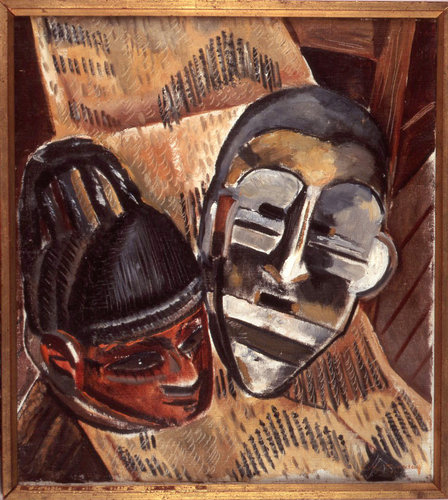 The assistant curator of African art at the museum, Ms. Biro will use European and African works, as well as American photographs and ephemera, to illuminate the period between 1914 and 1932, when New York’s artists, dealers and connoisseurs first began to appreciate African wood sculptures as art objects rather than ethnographic artifacts. Her exhibition will include about 40 masks, figurative sculptures and other decorative objects from West and Central Africa; paintings that were once exhibited alongside them by artists like Francis Picabia, Constantín Brancusi and Diego Rivera; and photographs by Alfred Stieglitz and Charles Sheeler, among others, drawn from 18 public and private collections as well as the Metropolitan’s own holdings.

Previous exhibitions of the period have given African art a supporting role to demonstrate its influence on Modernist artists. By contrast, said Ms. Biro, “I’m examining the context in which African art was exhibited at the time, and how that has influenced the way it is seen today.”

Although African art had been collected in America since the 19th century, Ms. Biro said, and could be seen in natural history and ethnographic museums, its breakthrough moment is considered to be 1935, when the Museum of Modern Art mounted “African Negro Art,” a survey of work from West Central Africa. “That is usually considered as the moment when African sculptures became seen as works of art in the United States,” Ms. Biro said. “But actually a lot was happening before that, and that’s what this exhibition is about.” (She first explored the topic in a chapter of her Ph.D. dissertation at the Sorbonne, in Paris.)

The show opens in 1914, the year that the avant-garde tastemaker Stieglitz mounted the world’s first dedicated display of African art objects at 291, his gallery on Fifth Avenue. Called “Statuary in Wood by African Savages: The Root of Modern Art,” the show comprised works from the holdings of the French art dealer Paul Guillaume, then the primary source for New York dealers. Many were figures and masks acquired from Gabon and the Ivory Coast, both French colonies at the time. The sculptures’ elongated features, lustrous surfaces and streamlined forms epitomized the aesthetics already admired by Europeans.

Ms. Biro has managed to track down six sculptures from Stieglitz’s exhibition, including a male figure from a reliquary and a mask with geometric features. Also included is an issue of Stieglitz’s journal Camera Work that reproduces his photographs of the show, as well as a photograph that juxtaposed drawings by Picasso and Braque with a different reliquary sculpture.

Another segment is devoted to the influence of the Mexican caricaturist and dealer Marius de Zayas, who started out as Stieglitz’s scout in Europe and ended up as New York’s foremost promoter of African art. He was introduced to it in Paris by the poet and collector Guillaume Apollinaire, and became fascinated by its relationship to Cubism after meeting Picasso. Back in New York, de Zayas persuaded Stieglitz to mount the African art survey. In 1915, de Zayas opened his own gallery, where he built the collections of the Dada salonistes Walter and Louise Arensberg; the lawyer John Quinn, a major backer of the Armory Show; and Agnes E. and Eugene Meyer, who had previously been Stieglitz’s patrons. De Zayas went on to curate exhibitions for Gertrude Vanderbilt Whitney at the Whitney Studio Club, the precursor to the Whitney Museum, the first of which was “Recent Paintings by Pablo Picasso and Negro Sculpture” in 1923.

Work from all three collections, together with de Zayas’s own holdings and the Whitney show, were photographed by the painter Charles Sheeler, who was a photographer early in his career. Many of his photographs will be shown here, along with several pieces that once passed through de Zayas’s hands. The grouping will also include seven sculptures once owned by Quinn, who by 1922 had assembled America’s pre-eminent African art collection. He was also an avid collector of Modernist masters, including Georges Seurat and Henri Rousseau.

Quinn’s acquisitions were sold after his death in 1924 at age 54, and little was known of the African work until Ms. Biro tracked it down. (“John Quinn is one of the great discoveries of my dissertation,” she said.) Her research shows that Quinn was acquiring work from British colonial Nigeria and the Belgian Congo, which suggests that by this point dealers in New York had access to a broader range of work.

The final segment of the Met exhibition covers the powerful influence that these sculptures, despite the fact that they had been procured through Europe’s colonization of Africa, exerted on forward-thinking African-American artists and intellectuals.

By 1925, the literary critic and philosopher Alain Locke, often referred to as the father of the Harlem Renaissance, was calling for a new art based on African identity and heritage. The next year, on a trip to Europe, Dr. Locke purchased a collection of African art primarily from the Belgian Congo with the dream of using it to found a museum in Harlem. Throughout 1927, the collection was exhibited in New York and toured to the Art Institute of Chicago. Sadly, however, the Depression dashed Dr. Locke’s institutional dreams and the collection was dispersed, but not before the work had considerably inspired African-American artists. A case in point is offered by a 1932 painting of two masks, one from Congo and the other from Nigeria, by the African-American painter Malvin Gray Johnson. All three objects will be shown at the Met.

For the Met, of course, the show also represents something of a watershed moment. According to Alisa LaGamma, the museum’s curator of African art, it is the first time that Modernist work has been shown in the Rockefeller wing, which since its opening in 1982 has been devoted to the department of the arts of Africa, Oceania and the Americas. And more shows that cross such departmental boundaries are likely to happen in the future throughout the museum.

“It’s part of the vision of our director,” Ms. LaGamma said, “that these departmental entities are artificial frontiers that we must all strive to break out of.”

“If visitors to the museum have one thing they know about African art,” she added, it’s that “it had an impact on Modernism.” For this reason, her department is “addressing that very powerful narrative that Modernism has written for African art, and we’re trying to expand it.”