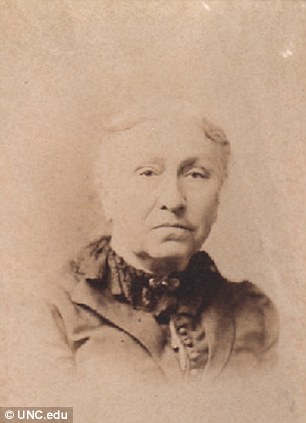 Transformation: Sarah Hicks Williams was born in the North but married a Southern physician who owned a plantation

A Civil War-era abolitionist woman went from supporting the end of slavery to calling the race ‘ungrateful’ and people who ‘drive me to be tight and stingy with them.’

This is the stunning story of Sarah Hicks Williams, who was originally from New Hartford, New York, and eventually married Benjamin Franklin Williams, a physician who owned a plantation in North Carolina.

The woman from the North wrote a series of letters from the time of her marriage in 1853 until 1867, two years after the end of the Civil War.

Mrs Williams’ letters will be put on display inNorwich, UK, in honour of Britain’s Black History Month, and show her gradual shift of opinions on slavery and of those oppressed.

In 1853, a 26-year-old Sarah Hicks married Benjamin Williams and entered into a new life in the South.

The plantation owner had courted her for some eight years, as she was extremely reluctant to marry him and move to the South, according to the book Root Of Bitterness: Documents of the Social History of American Women.

Once she was settled at Clifton Grove, a working plantation, she wrote her parents to describe that the 37 slaves on the property were ‘treated with more familiarity than many Northern servants.’

She confided to her parents: ‘I feel confused. Everything is so different that I do not know which way to stir for fear of making a blunder. 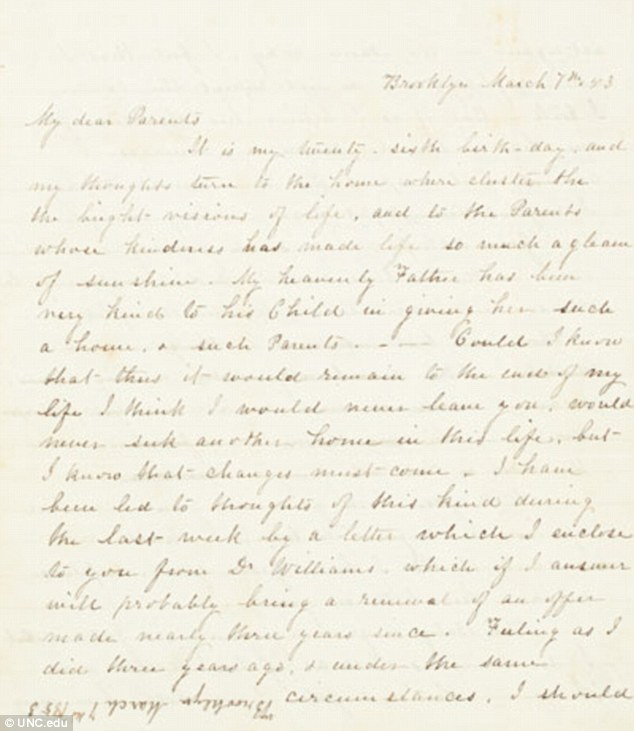 Settling in: In a series of letters written over several years, Mrs Williams detailed her new life on a Southern plantation 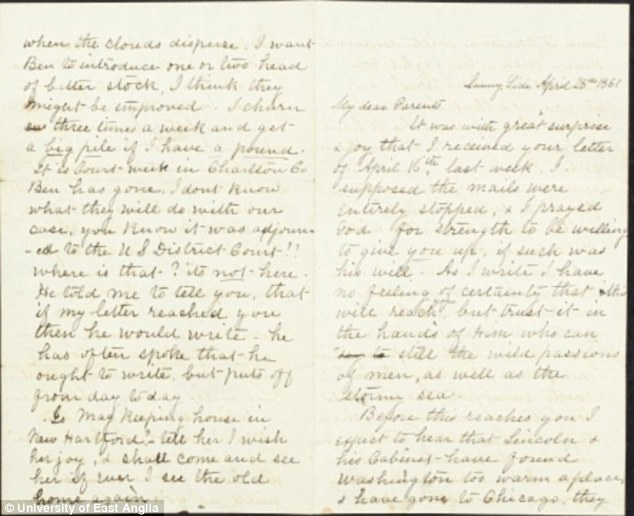 Change of heart? Though she began as an abolitionist, Mrs Williams’ views on blacks gradually shifted

‘I have seen enough to convince me that the ill-treatment of the Slaves is exaggerated at the North but I have not seen enough to make me like the institution.’

According to the Guardian, Ms Hicks had wrestled with only two things about Mr Williams before marrying him. ‘One is his owning slaves,’ she wrote.

‘I cannot make it seem right and yet perhaps there may be my sphere of usefulness.

‘The other is not being a professing Christian.’

However, neither stopped her from marrying Mr Williams, and indeed, she wrote in several letters that his love of her was great. ‘My husband is all kindness and loves me more than I am worthy,’ she wrote.

They went on to have five children together. 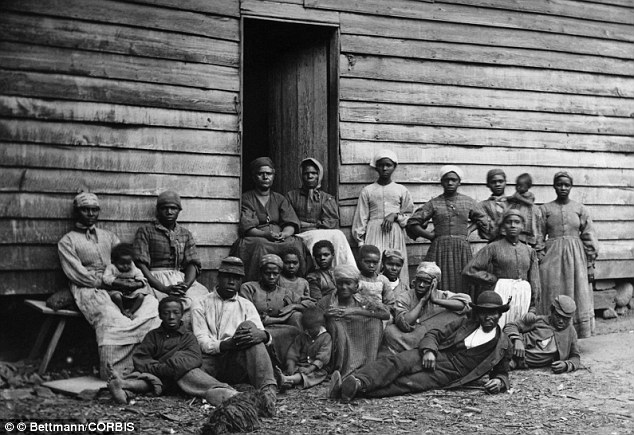 Oppressed: A group of slaves outside their log cabin between 1860 and 1864 (file photo); when she married, Mrs Williams became the mistress of 37 slaves

When tensions were rising and the nation was on the threshold of the Civil War, Mrs Williams said she’d rather go barefoot or wear homemade stockings than buy them from slaves.

But living in the South seemed to gradually alter her perceptions. In 1862, she commented: ‘The little folks and “contrabands” are oppressing themselves with sugarcane.’

In August of 1867, Mrs Williams wrote of her experiences with newly-freed hired help. ‘Three have run away during the last few months,’ she told her parents. ‘They came to us naked (all but) they are an ungrateful race, they drive me to be tight and stingy with them.’

Author Rebecca Fraser of the University of East Anglia’s School of American Studies will publish a book about her dramatic change of heart, entitled Gender, Race And Family In Nineteenth Century America: From Northern Woman To Plantation Mistress.

As any historian would say, Lincoln’s Emancipation Proclamation did free the slaves, though the societal and cultural norms were much more difficult to overcome.

And as these letters reveal, geography and influence can speak in volumes to one’s paradigms.